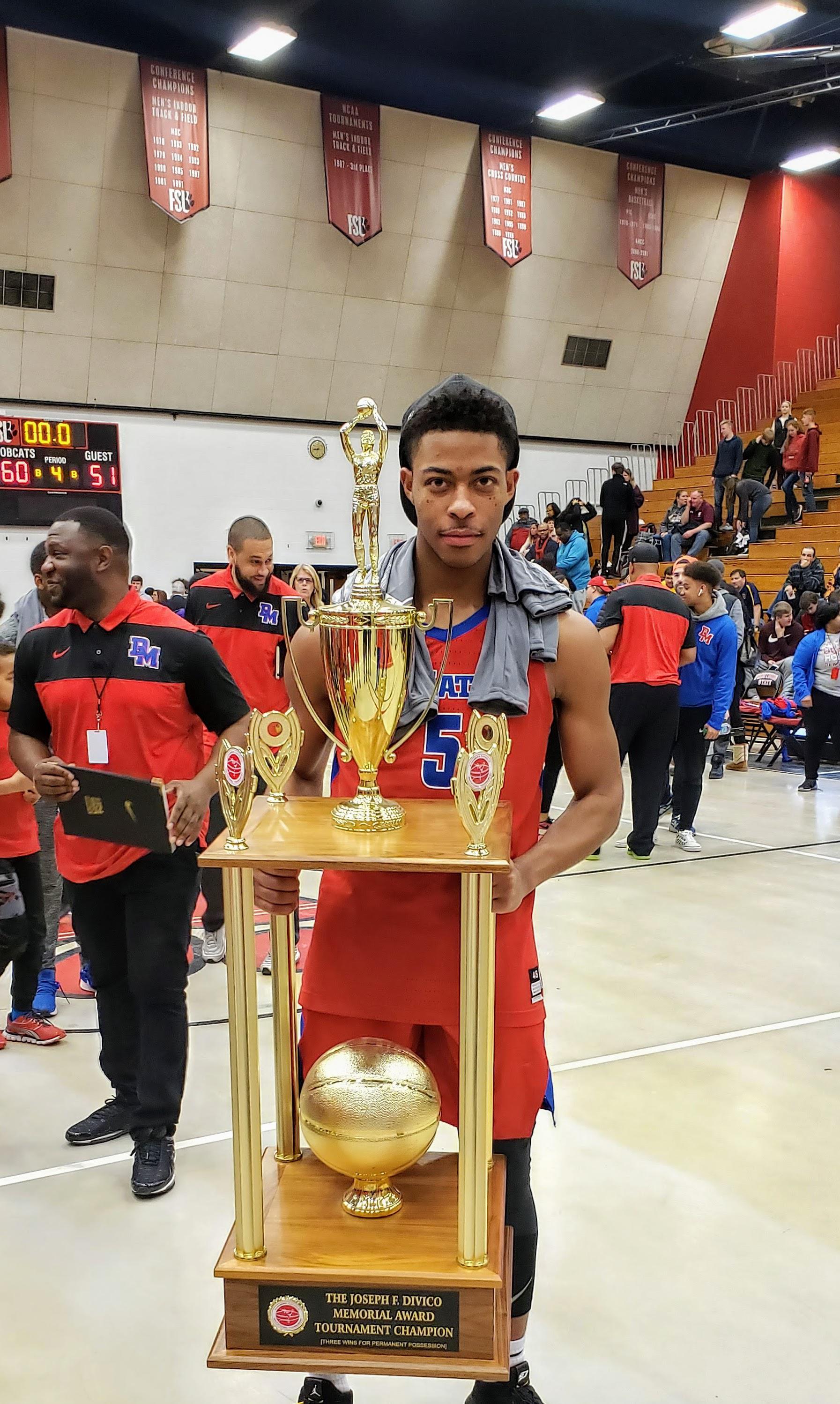 FROSTBURG, MD - The trophy seemed nearly as big as he was, and as Justin Moore posed for pictures with it, a smile spread across his face.

One final goal to mark off the checklist.

The Villanova-bound DeMatha 2019 guard capped his stellar prep career by scoring a game-high 25 points to lead the Stags to a 60-51 win over Paul VI to capture their second straight Alhambra Catholic Invitational Tournament title at Frostburg State University. It was DeMatha’s 25th ACIT championship win in the past 49 years.

The win provided a fitting cap for a high school career that saw Moore go from highly-touted freshman to comeback story - after a season-ending knee injury his sophomore year - to a multi-time champion and Division I commit.

Paul VI led 29-23 at the half, but DeMatha outscored them 20-8 in the third quarter - taking the lead on a four-point play by 2020 guard Earl Timberlake - and never trailed again.

Moore averaged 24 points per game in his final Alhambra trip, highlighted by a 32-point outing in a win over St. John’s on Friday.

“It means a lot,” Moore said. “We’ve been through a lot this season, and we didn’t get the ultimate goal that we wanted [a repeat sweep of the WCAC, Maryland Private School and Alhambra titles], but we finished our last two championships out strong, so it’s good.”

With another chapter of his career done, Moore is turning his attention to the next one.

“I’ll probably take a little bit of a break,” he said, “but I’ve got to get ready for Hoops Summit in April.”

So reaching the 1,000 career point plateau was an accomplishment that meant a little extra to the Chicago State commit, who accomplished it in his final high school game as the Panthers downed Gonzaga, 72-67.

“I think people, when they hear ‘Defensive Player Of The Year’ they don’t necessarily think - not that I can’t score, but not consistently,” he said, “and I think that the 1,000th point was showing that I can play both ends of the court and hold my own.”

Jones reached the milestone on a 3-pointer that put the Panthers up 50-44 with 6:46 remaining in the game. He admitted the lead-up to the mark was a little nerve-wracking.

“[Friday] before we played Goretti they told me, ‘You know you’re 27 points away,’” he said. “So then I had 14 against Goretti. And then today all morning - from breakfast to the time we were warming up they were like, ‘13, 13.’ In the beginning I came out and I think I was pressing it a little bit too much - I was missing shots I usually make and I missed a couple of free throws. Then at halftime, the coaches just settled me down and told me, ‘Just let the game come to you,’ and in the second half I calmed down and relaxed. I just stopped thinking about it as much and just worried about winning. I put my team first instead of putting my 1,000th point first, and then I just started scoring in the flow of the offense and not trying to force 1 on 1 matchups.”

The game capped a strong week for Jones, who was named to the Alhambra All-Tournament First Team. Now he’ll turn his attention to preparing for life at Chicago State, which he committed to in November.

“I think I’m going to take a couple of days off,” he said, “and then coach told me, ‘You better get in shape, because when you come up here, we’re going to run.’ So, I’m really looking forward to it; it’s going to be almost a brand-new team, and there’s going to be a lot of us coming in, so I’m just looking forward to buying in, meeting new people and hopefully winning the WAC - that’s my biggest goal.”

Despite being the clear focus of opponents’ defensive attention, the Louisiana State commit was unstoppable. He opened with 39 points against Paul VI Thursday, followed that with 40 against Bishop and closed with another strong outing. His 114 total points left him just 20 short of tying the tourney’s 3-game scoring record of 134 set by Anthony “JoJo” Hunter of Mackin (DC) in 1976.

The day’s first two contests were switched in the wee hours of Saturday morning to avoid another set of BCL vs. BCL and WCAC v.s WCAC matchups. St. John's was originally slated to face Gonzaga, while Mount St. Joseph would have drawn St. Frances.

“We actually found out this morning - [Coach] sent a text out saying we were playing Mount St. Joe’s at 3," SJC 2020 guard Ishmael Leggett said. "It’s just another game for us, and both the teams wear purple and we’re just trying to get a win. We wanted to send our seniors off with a good feeling in their hearts.”

As St. John’s 2019 guard Casey Morsell walked off the court for the final time after scoring 26 points in a win over Mount St. Joseph, a young fan excitedly approached him and asked for his shoes - a request with which Morsell happily obliged.

“I love this community,” Morsell said. “This community is so unselfish and they love this game and everything that we’re about, so I love playing here and I’m glad I could finish my high school career here.”

The Virginia-bound Morsell handed out a few autographs as well - an aspect of the Alhambra experience that he’s admittedly improved on.

“Yeah, I mean it was definitely something I had to work on,” he said with a smile. “My freshman year I came down here and it wasn’t looking the same as it does now. But just coming down here and meeting all these people, it’s just been a great experience.”

Morsell put on a show in his final SJC performance, going 9-of-12 from the field and 6-of-8 from 3-point range. Afterward, he reflected on his time at St. John’s.

“It’s a pleasure,”  he said. “This uniform means so much to me, you know? Just with my development coming in, no one would have thought I would be in the position I am now. So I gave this uniform everything I have. There’s stuff I wish I could have done differently, but at the end of the day I did everything I could, and I’m glad I did.”