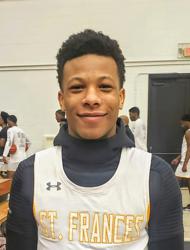 The 6-foot, 180-pound Baldwin was at his best when it mattered, hitting game-winning buzzer beaters in two of St. Frances' biggest contests - Memphis East (TN) in the Chick Fil A Classic in December and St. Maria Goretti in the BCL title game earlier this month.

Recently, DMVelite caught up with Baldwin to discuss his season, recruitment, favorite basketball memories and more:

WHAT WAS THE KEY TO YOUR SUCCESS THIS YEAR?

“Just sticking together as a team. With us, it’s just like a family thing - it’s more than basketball.”

DID THE SEASON GO THE WAY YOU HOPED?

Yes, the goal I set was to win both of the conferences - BCL and MIAA - and that’s what we’ve done; we won both.”

HOW EXCITED ARE YOU FOR THE SPRING AND SUMMER?

“Oh, I’m very excited to play on the EYBL, play on a new team -Team Durant - and I’m looking forward to playing in Peach Jam.”

“My strengths are I’m a pass-first point guard, play great defense and just getting my teammates involved early. The biggest thing I really want to work on is cutting down the turnovers and working on my shot more.”

“Most recently I’ve been hearing from Georgetown, Cincinnati - Texas Tech called. Seton Hall, VCU and that’s about it.” [NOTE: The week after this conversation, Baldwin cut his list of finalists to Clemson, Georgetown, Maryland, Seton Hall and VCU.]

“Just as a freshman, getting playing time, having a team that likes to win and not losing - that’s about it.”

“Not much, just lay around or be with my girl.”

“I was recruited for football into St. Frances - quarterback. As a freshman, I played varsity football. I was getting more offers [for basketball] and I just was like, ‘Stick to basketball.’ And I didn’t want injuries. I don’t really miss it.”

IF YOU HAD TO PICK A FAVORITE BASKETBALL MEMORY WHAT WOULD IT BE?

“Of course, both of the game-winners I hit - in South Carolina and [the BCL final] at Loyola College. The first one was a big game against the No. 1 player in 2019 [Memphis East’s James Wiseman] and they expected us to lose that game. Then on Tuesday at Loyola - Oh my God, I’m just so happy about that one. Both of them were just great experiences. I had a great feeling as soon as the ball left my hand.”