Markelle Fultz gave back with his inaugural youth camp this summer. 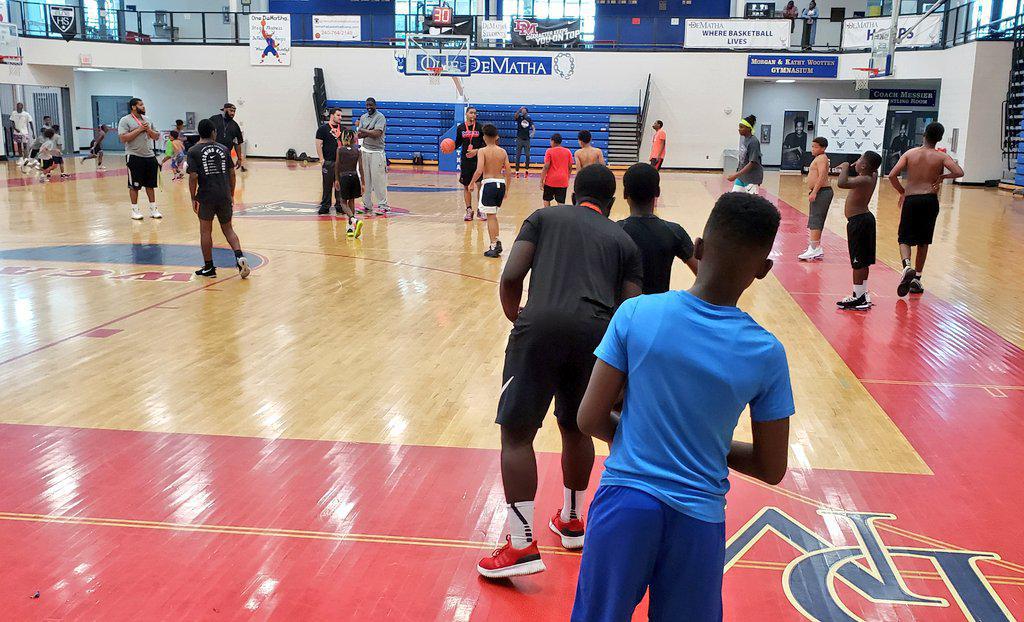 Players in action at the inaugural Faithful 2 The Grind Camp at DeMatha in August. (Marcus Helton)

HYATTSVILLE, MD - Back in familiar surroundings, Markelle Fultz looked around and took time to reflect.

The Orlando Magic guard and former DeMatha Catholic High School star returned home for his inaugural Faithful 2 The Grind Camp in early August, and recalled a time - not all that long ago, really - that he was in the campers’ shoes.

“Since I was little and coming to DeMatha Camp, I always said once I make it I want to give back,” Fultz said. “We were doing the bookbag giveaway [my rookie year], and unfortunately due to injuries I wasn’t able to do a camp my first or second year, so this summer I was like, ‘I’m doing a camp regardless - no matter what’s going on.’ So it’s been in the works, really, for a while, but to actually put it together and have everything come together is so dope to me. Just to be able to interact with the kids and have fun with them and be a role model to them can probably change their life forever, you know? And for me, it’s genuine and I just love doing it. This is what makes me feel happy.”

The inaugural Faithful 2 The Grind Camp attracted 31 campers ages 7-13, who got to interact with and receive instruction from the former No. 1 NBA Draft Pick and a talented group of counselors. The event also included lunch, a school supply giveaway, shoe prizes and the presentation of camp awards, including one for the player who best illustrated the “Faithful To The Grind” mantra.

“You started out kind of rocky, but you kept with it through adversity,” Fultz’s mother Ebony explained, “and you pushed through and you’ve shown improvement every single day. And at the end of the week, you just stayed faithful; you didn’t give up on what you wanted to do coming to camp because it got a little hard or you were a little tired.”

In terms of preparation, Ebony Fultz said that DeMatha coach Mike Jones allowed her family to shadow his summer program and pick up tips and strategies for running an event. One of the most important aspects, she said, was that Markelle be hands-on throughout.

“We didn’t want to pay anybody to hold a camp and we not be involved or know what’s going on,” she said. “My goal and Markelle’s goal is to build a brand, so he runs his organizations, he’s engaged, he’s involved and he knows what’s going into it. For me there’s no better way to learn when you’re starting it up than to be around to do every little thing, so you know what goes into it.”

Jones said that personal touch is what helped set his former player’s camp apart from others he’s been around.

“To see him come back and do something like this and just give back to the kids - he’s just a kid that wants to do stuff for other people, and it’s amazing,” he said. “I’ve been around a lot of professional athletes during camp environments, and the fact that he’s here from start to finish every day interacting with the kids, playing with the kids, guarding the kids - scoring on the kids - it’s just everything. And then obviously, giving them tidbits here and there, a lot of people wouldn’t be willing to do that, especially with the status that he’s kind of achieved. He’s just the same humble young man he’s always been, and we’re very proud of him.”

Markelle Fultz said he pulled a little bit from the myriad youth camps he attended growing up while plotting out the camp structure, which included games as well as group and individual instruction.

“We took a lot of stuff from DeMatha, you know, that I’d been through and thought was fun,” he said. “I used to go to DeMatha Camp and I had a blast - I felt like it was one of the best camps so we definitely used a lot of that, but we also put in a little bit of other stuff - you know defense and bringing people in to teach them stuff. It’s been dope.”

Among the camp staff were a pair of Orlando Magic staffers and several of Fultz’s former high school and youth coaches such as Darrell Mack, who taught Futz as a youngster at Emery Recreation Center.

“One of the best things about watching them become successful is when they give back and you’re now working their camp, after you’ve coached them,” Mack said with a smile. “So it’s good to see, man, and I think this camp will only get bigger as Markelle continues to do it. I’ll be here every year they’ll have me; it’s been fun.”

The feedback from campers and parents was positive as well, and plans are already in the works to expand the program. Fultz said he’d like to do a camp in Orlando, as well as at the University of Washington, where he played his lone collegiate season before declaring for the NBA Draft.

“It’s so dope, you know?” Fultz said. “I’ve got pretty much all my family and friends just here working. Coach Mack has been there since I was younger coaching me, Coach Jones coached me in high school. So, it’s all familiar faces and just being comfortable, and all of us know each other and get along and help the kids. That’s the biggest thing, just helping them get better and have fun and just realize, you know, life is short, really, but it’s all about just having fun and living in the now and getting better and chasing your dreams. That’s been the biggest thing.”