The Gaithersburg (Md.) 2021 guard made a strong return to the court. 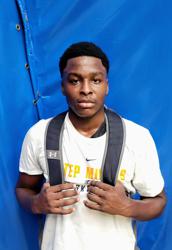 The 2019 DMVelite Fall League kicked off earlier this month with a mix of varsity and junior varsity programs in action at Holy Trinity Episcopal Day School.

Throughout the league regular season and playoffs, DMVelite staff will spotlight standout players and storylines.

Team Vito White 2021 guard Mandela Tarke (Gaithersburg)  is just getting back on the floor after suffering an ankle injury in summer league that kept him on the shelf for an extended period.

Tarke was strong in his return, posting a team-high 13 points in a 43-38 DMVelite Fall League win over Osbourn Park (Va.) on September 14.

"It was a rough, like, two months," Tarke said, "because I wasn’t able to play and all I could do is just really do rehab and I was struggling. This was my first game back playing any organized basketball, and it was really fun, you know? My coaches said I did really well and they’re proud of me. I’m having a strong comeback, and I just can’t wait until high school season starts up in about two months, so I’ve got to get ready for that.”

The 5-foot-9, 180 pound Tarke said it took him a while to get his legs under him, but he found a groove and regained his confidence as the game progressed. He added that his time sitting out injured did have one benefit.

“ My shooting really got better over this summer since I couldn’t really hoop and I was just working on my jumpshot,” he said. “I’d say that’s improved, and I’d really say my driving and my defense are what give me motivation to keep striving and keep going.”

If Tarke’s last name sounds familiar, it’s because he’s the latest in a line of Tarkes to play at Gaithersburg, joining his older brothers Anthony and Nendeh (who finished his high school career at Bullis last year).

“We’re really competitive,” Mandela Tarke said. “ Every day we play one-on-one. My brother [Anthony] i’s playing D-I at UTEP, my other brother [Nendeh, he’s going to a prep school for one year. We’re always talking trash and bragging about each other, so it’s really fun to be in the household - it’s a good environment.”