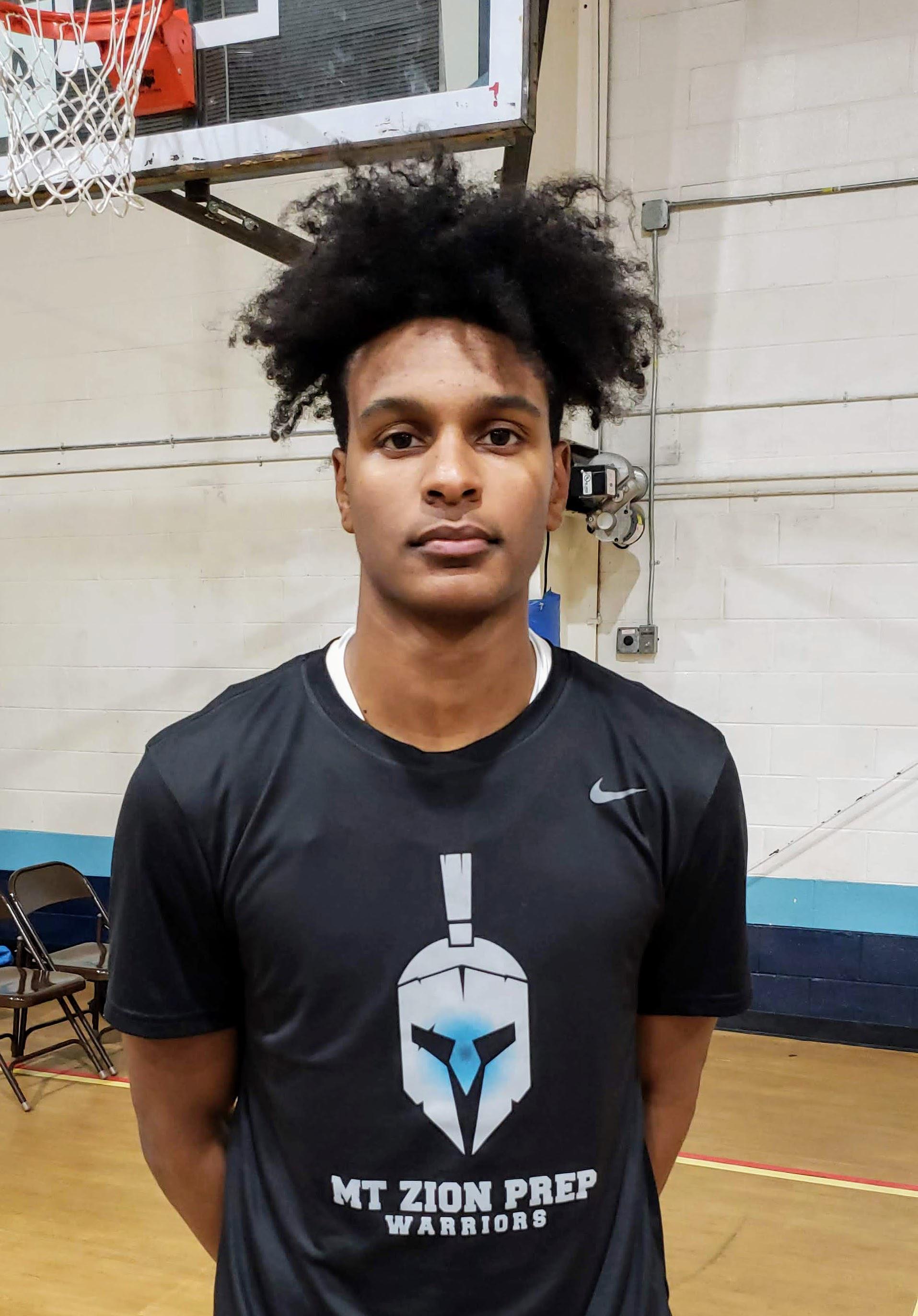 RECAP: Mt. Zion Prep jumped out to an early lead and never looked back, rolling past Virginia Prep Sports Academy 112-57 on Day 1 of the 4th Annual Myrtle Chaffin Classic in Lanham, Md.= on November 16, 2019.

Frazier put on a show Saturday, going for a game-high 22 points on 10-of-14 shooting, including several highlight-reel dunks.

A native of Arizona, Frazier starred at Buckeye Union High School, leading his squad to the Arizona Class 4A state semifinals as a junior. He played his travel ball for Compton Magic on the Adidas circuit.

“I didn’t get recruited the way I wanted to back in Arizona,” he said of his reason for coming East to prep. “I went to a small high school and I was kind of overlooked the whole time, so I just decided to go out here and get looked at out here.”

Verbal Commits currently lists Frazier with DI offers from Drexel, Eastern Michigan and UMass, along with D2 Metro State (CO). He said he’s received some high major interest since coming to Mt. Zion, and its not hard to see why. The 6-foot-6, 198-pounder is explosive off the floor and plays with high energy on both ends of the floor.

“I feel like I can do everything,” he said. “I feel like everybody can improve, but I feel like I bring the energy to my team every game. The biggest things I want to work on are boing a leader and talking more, and being more productive on defense.”

The move East should end up paying off for Frazier, who has made a seamless transition on and off the court.

Well, except for the weather.

“Terrible!” he said with a laugh.

NEWTON LOOKING TO CLOSE STRONG: Mt. Zion 2020 win Woody Newton already has his college future squared away, having signed his National Letter of Intent to play at Syracuse.

“It’s a relief, you know?” he said. “Making sure that I know that I don’t have to go out and, like, prove myself to coaches, it just took a lot of stress off my back.”

Now, the 6-foot-9, 200-pound Newton is focusing on closing out his prep career strong - “I’m just trying to get a championship under my belt,” he said - and on preparing himself physically and mentally for the college level.

“Individually, I’m looking to become a better leader, you know,” he said. “Making sure I lead these guys by example because I’ve been there before. So I just want to show that I’m a leader and that I’m really a big guard and that I can handle the ball against any guard in the country and that I can shoot the ball with the best and everything like that.”

Newton posted 10 points, 4 assists and 3 rebounds in the win over Virginia Prep, showing his improved perimeter touch with a corner 3 as the Warriors built a quick lead.

“I feel like we can win a national championship with this team, you know?” he said. “We’ve got a lot of pieces throughout the board - a lot of scorers, shooters, defenders, and we’re a real versatile team. We like to run and get out fast, so its going to be real interesting to watch this season.”

N’GUESSAN POSTS DOUBLE-DOUBLE: Mt. Zion 2020 forward David N’Guessan posted 13 points and 10 rebounds in the win. The 6-foot-8 N’Guessan had a strong summer with Team BBC and attracted several D-I offers, including St. Joseph’s (Pa.). He said the Hawks have been after him the hardest so far. His other offers include East Tennessee State, George Mason, Howard, Robert Morris and Towson.

MT. ZION RELOADS: By now, Mt. Zion coach Rod Harrison is well-versed in the cycle of being a prep school coach and replacing his team on an annual basis.

“It’s a challenge every year,” he said. “I tip my hat to Coach [John Caliapari]at Kentucky, because every year you’ve always got to make sure you recruit the right type of personalities that not only fit us, but fit our culture and then make sure they can mesh together. But this year, it’s a great group of kids, so we didn’t have too many things that we had to tighten up on, they kind of do it themselves”

That’s a good sign, because Harrison said he has high hopes for this year’s group, which improved to 5-0 with Saturday’s win.
“This year’s team is probably one of the most talented teams we’ve had, top to bottom,” he said. “We’ve got a lot of pieces I’m excited about - the kid Otis, of course Woody, Dave is finally coming into his own, so we’ve got high hopes for this team. If we get everything together, we think we can push for a National Championship this year.”