Jaden House took over in the second half of the Dragons' win. 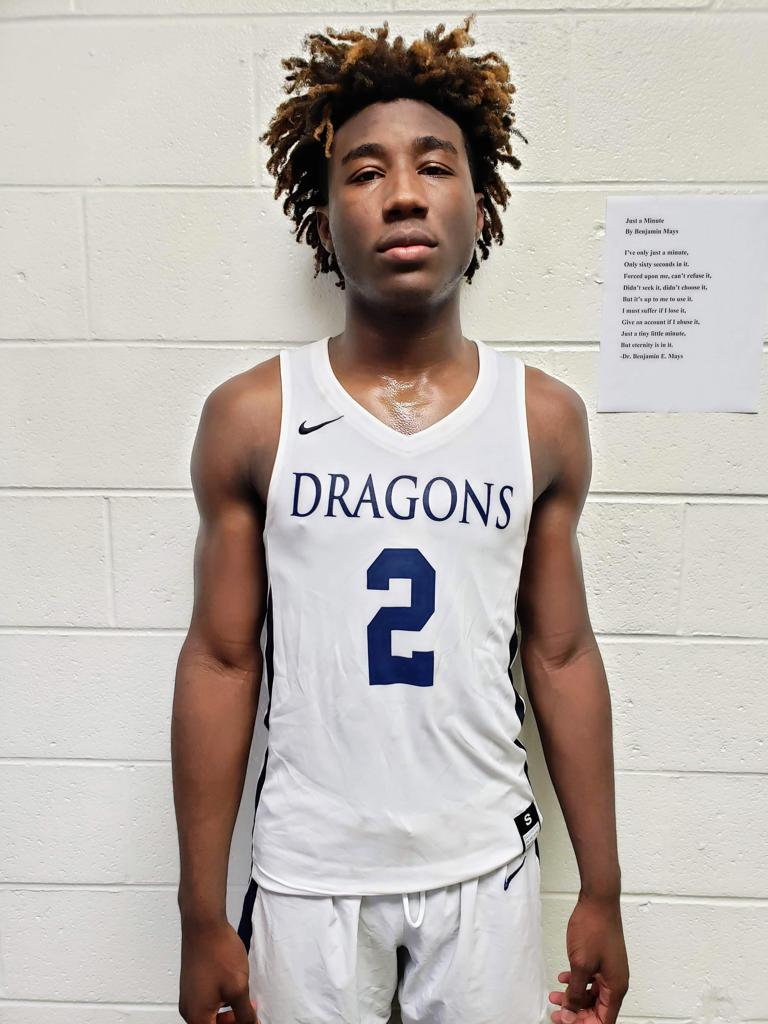 WHAT HAPPENED: 2021 guard Jaden House scored 25 of his game-high 28 points in the second half as Middleburg Academy pulled away late to beat Lanham Christian 75-66 in the 5th Annual Wootten Classic at Bishop O’Connell High School on November 30, 2019.

House absolutely took over in the second half, more than making up for a slow start to Saturday’s game.

“[At halftime] The coaches were just saying I was playing lazy; kind of like I didn’t want to be there,” House said. “ So they said when we came out just show them something, and I tried to just go out there and play my game. I went to go take it, instead of letting it come to me.”

LCA couldn’t stop House going downhill, and Middleburg coach Joe Philogene said that became a big part of the gameplan after the break.

“Jaden really picked it up in the second half,” he said. “Our thing was getting the ball in the open court - in the open court we don’t believe there’s a lot that can stop Jaden, so [the plan] was getting that out. Then Zay [Folkes] kept us in it throughout the entire game, Cavan [Reilly] did really well in the first half. So it was kind of balancing it out and getting it ready for Jaden to get it going.”

A transfer from Henrico (Va.) who reclassified to 2021, the 6-foot-3, 200-pound House has made the most of his short time at Middleburg. He was one of the standouts at the DMVelite 80 in September, and has picked up offers from Howard, James Madison, Mount St. Mary’s, Old Dominion and Stetson since his arrival.

“Everything’s going good right now,” House said. “I’ve got coaches that really want me to go out there and just be me. They help me every day in practice and just try to get me better with the things I’m working on. Like today: just going out there and just sitting and playing ‘D’, that was something that when I came here I wasn’t really doing much, and now I feel like I can sit on my man and play ‘D’ now.”

As for the strengths of his game?

“Just playing downhill - obviously I can score but I just like to do other things,” he said. “Like, in the first half I was trying to get more of my teammates involved and making passes and the right reads. I’m a strong guard; I can do everything pretty much, but scoring is probably the strongest part of my game right now.”

House isn’t the only big transfer Middleburg will be counting on this season. Fellow 2021 guard Isaiah Folkes - a former Stonewall Jackson-Manassas star - has fit in seamlessly as well.

“It’s been amazing,” Folkes said of his move. “It was like family right away as I came here. I like the coaches; they believe in me and they put all the trust in me to lead the team and I love it. I’m just learning to be a better basketball player and get my name out there more to the college coaches. But just getting better, basically; improving my jump shot, ball handling, passing, finishing - everything in my game.”

The 6-foot-3, 200-pound Folkes looked good while dropping 18 points in Saturday’s win. He got to the basket and finished effectively, and showed his exceptional explosiveness on an eye-popping catch and finish of a lob from Reilly in the second half.

Since his move to Middleburg, Folkes has picked up scholarship offers from Elon, James Madison, Lehigh, Norfolk State, Old Dominion, Radford, Stetson and Youngstown State, and he said Murray State and Virginia Commonwealth have been in contact as well.

“They’ve bought a whole lot of positives defensively where we’re really strong, and offensively they’re just a force to be reckoned with,” Philogene said of his transfer guards. “So we’re really enjoying their presence, and they’re really just great kids. They listen and they’re very coachable, so we’re very excited about those two.”

2022 guard Cavan Reilly set the tone for Middleburg offensively, scoring 11 of his 15 points in the first half to stake the Dragons to an early lead.

“My coaches really give me the green light,” he said, “so honestly I was pushing the ball in transition and looking for my shot. I’m a shooter, but this game it was more of my other stuff that showed but I think I just need to penetrate the zone and look for my mid-range too.”

Although his scoring pace slowed in the second half, Reilly’s presence on the perimeter opneed up driving lanes for Folkes and House, and he did a good job running the offense and finding open teammates.

“Honestly, we pushed the ball more, I think,” he said. “We had a lot more open shots. In the first half we were kind of forcing it, but I thought we got it going there in the second half.”

Now in his fourth year at Lanham Christian, coach Byron Mouton - a standout on Maryland’s 2002 National Championship team - has built a program literally from scratch, and it hasn’t always been easy.

“It’s tough, being at a small school like that with limited to no resources,” he said. “ Like, not even having a basketball program and my first year was just helping my Pastor out - ‘I’ll do it one year’ -  and then I’m watching all these teams win games and I said, ‘Hold up, man, I’ve got to bring some kids in here, there’s no way.’ 90 percent of the kids on the team are the kids I convinced their parents to come to the school. If I wouldn’t have done that, we wouldn’t have a team. But I love my kids.”

And the kids love him, which was apparent in how hard they played while giving Middleburg a game until late. The Lions were threatening until a flurry of turnovers in the fourth quarter dug them an insurmountable hole.

“I think right now we’re a team that just has to be more disciplined at the end,” he said. “It was a four-point game with two minutes left, and then we made three turnovers and the lead goes up to 10. It’s hard to win games like that, especially against good teams. We’ve just got to execute on the defensive end. I think we got a little excited and just stopped paying attention to - like my old coach used to tell me - the ‘time and score,’ and we just turned the ball over.”

LCA has now lost tough games to Middleburg and Riverdale Baptist, and although his team has hung tough, Mouton said he’d like to see results.

“Coming into the season, I wanted to bulk up our schedule, which we did to give these guys some opportunities to get some exposure,” he said. “But I’m at a point right now, after we played Riverdale and then we played Middleburg, we need to win these games. I think my team now is good enough to compete against these guys and win. That’s two games in a row we had an opportunity to tie the game or have a chance to win, and we end up turning the ball over or doing something silly to cause us to lose these games. That’s the same thing I told my team in the locker room: ‘I ain’t trying to be no show pony; I’m trying to WIN the contest. So moving forward, there’s no more sympathy; let’s win these games.’”

2021 forward Aaron Lewis had a great day against Middleburg, finishing with a team-high 20 points. He's active and athletic on both ends of the floor, and has been a bright spot in his second year at LCA. He's definitely a player to watch as the season continues.

“You can see his confidence growing,” Mouton said. “I didn’t know what to expect from him, but this year, he’s balling, man. He’s playing real well.”