A look at a day of action at Osbourn Park High School. 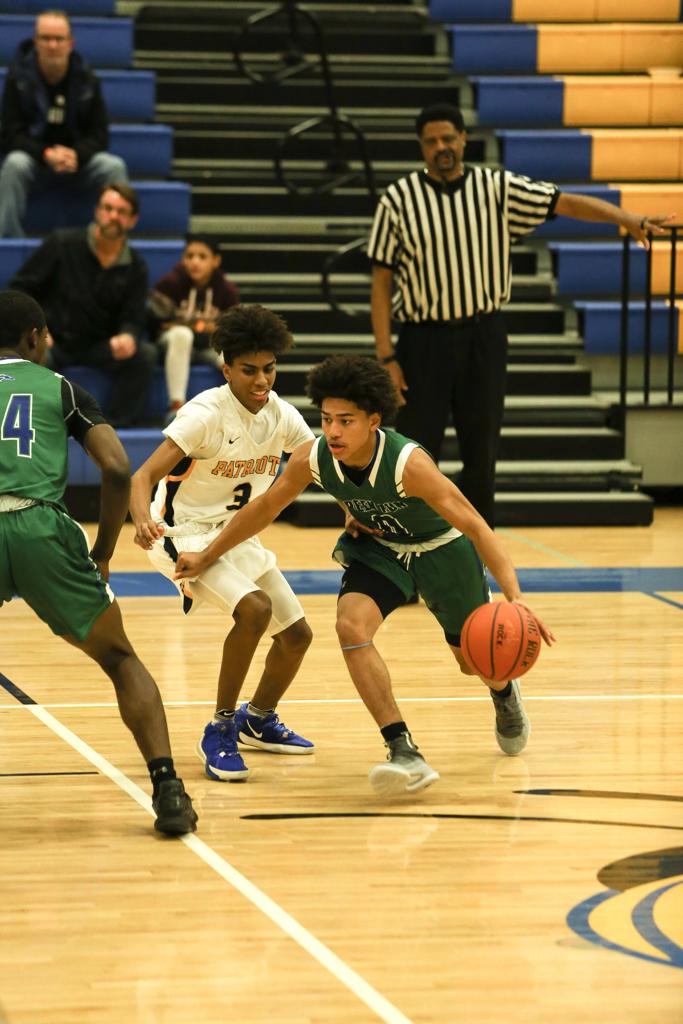 MANASSAS, VA - The 2019 DMVelite Nova Tip-Off Classic gave 10 teams from DC, Maryland and Virginia the opportunity to get some early-season work on December 7 at Osbourn Park High School.

“It’s definitely good to see different opponents than what we see at home,” said Green Run (Va.) coach Kenneth Harris, “and it’s good to get away sometimes, because we find our identity. You guys are holding a good event here, and we’ve always wanted to play in a DMVelite event - you’ve got the Governor’s Challenge and all that - but it’s good basketball up here. So we try to come up to this area each year; it helps us a lot.”

Here’s a recap of the day’s action:

2021 guard Kenneth Clark scored a career-high 32 points to lead the Bruins over the Spartans in Saturday's opener.

“That’s actually the first time I’ve had more than 20,” he said. “I was just shooting, and then in the last timeout somebody said I had, like, 30-something. So I was pretty excited then.”

Clark did the bulk of his damage in the second half, scoring 19 of his points to help the Bruins stave off a Veritas rally.

Forest Park coach Mak Dogbatse said turnovers were the difference in the game, noting that his team had 19 in the first half and just 7 after the break.

“We forced some turnovers and got some easy baskets, and our kids decided to take the ball to the basket, and make that extra dribble and get lay-ups, and that’s what helped us in the second half. I thought we played pretty good defense and started figuring out what kids could do what.”

Annandale coach Deidrich Gilreath said he was pleased to see his team maintain its intensity throughout.

“It was important because its kind of what we’ve struggled at so far,” he said. “We’ve started out fast, but in our first two games we’ve let down. So that’s my main thing that I wanted to keep up. We had a good first quarter, but in the second quarter I think we only scored, like 11 points, so that’s what I mean. I think the second quarter is still starting fast, so after the first we’ve got to be able to keep that going after we make subs. When the subs come in - I tell them all the time - there shouldn’t be a drop off.”

There wasn’t much of one on Saturday, and the Atoms saw plenty of positives to build on.

“I think we have a lot of potential,” Adams said. “We’re really young - we usually only have one starting senior and we only have four seniors in total. So really, I think over the season we can really only get better, and I think we really have a chance to make it to the state tournament.”

“We’re still learning because we are a young team, but we’re getting more disciplined every practice. By the time we do get everyone on the same page, I think we’ll be really good.”

Overall, Gilreath and his players said it was nice to get a look at an unfamiliar opponent.

“This is our third game and each game has been different styles,” Gilreath said. “I mean, like, the first game, the guys got back and just played straight zone the whole game. The other night  we played up-tempo and we scored 80-something points in that game. This game there was pressure and they sat in a zone but it was more of an aggressive zone, so we’ve seen three different kinds of styles. So this will help us out going into our district, with like Hayfield, West Potomac and those guys, they kind of play as physical as they do. So yeah, it was good for us to see this style.”

2022 wing Alphonzo Billups scored a game-high 27 points to lead the Blue Devils, who built an early lead and held off the Vikings late.

Varina came out the gates quick, building an 18-7 lead after one quarter. Woodbridge settled in though, closing the gap to 28-22 at the break. The Vikings eventually cut the Blue Devils’ lead to 28-26 with 6 minutes to go in the third quarter, but Billups answered with a floater to make it a two-possession game and Woodbridge never got any closer.

“I think down the stretch because we’re so young, trying to keep from turning the ball over was the issue,” Varina coach Kenneth "Boom” Randolph said, “but I think really what helped us down the stretch was the fact that we could maybe make some free throws, maybe take care of the ball. I mean, when you’re in scramble mode you make a lot of shots - any team can come back when you’re in scramble mode. But I think they got a little better at the end and tried to take care of the ball, and a couple of the sets out of the timeout helped us keep that lead.”

“Everywhere you go it’s a different style of basketball,” Randolph said. “So, I wanted the schedule this year to have maybe a little down 757 or maybe up here - not just playing at home. You get a different style and it’s more physical up here, I think. The officiating sometimes is a little chippy and a little touchy, but everywhere you go, it’s going to be something different, so you never know down the stretch if you’re trying to win a region or a state, you might run into one of these types of games and so least you’ll have the experience for it.”

2021 guard Jacob Cooper had 17 points, 2021 forward George Wilson 14 and 2021 guard Eli Kennedy 10 to lead a balanced scoring effort as the Stallions controlled the Public vs. Private matchup from start to finish.

Green Run (3-0) jumped out to a 21-6 lead after the first quarter and Virginia Academy couldn’t recover.

“It was a great start for us,” Cooper said. “We kind of shut down the big man for them [2021 center Oluwasegun Durosinmi] and we brought the ball up fast and shared the ball and stuff. We got rebounds and played great D.”

When asked if he felt his team caught Virginia Academy off guard with their hot start, Cooper strongly agreed.

“Definitely,” he said. “They underestimated us, but we came out and took it to them early. We watched a lot of film as a team and individually on what their players like to do and their characteristics and stuff. So we just came out, knew what they liked to do and just put it to them.”

The Stallions outrebounded the Patriots 40-29 and harassed them into 24 turnovers.

“We knew coming in that we felt like we were in better shape than them,” GRHS coach Kenneth Harris said, “so we wanted to just wear them down and get the big boy going and speed up the game a little bit. They started getting kind of used to the trap, so we kind of slowed it back and played our regular half court man, but by that time we had kind of had them going the way we wanted to.”

Despite the comfortable victory, Harris said he still saw plenty of room for improvement.

“We’ve just got to keep getting better,” he said. “ I think offensively we leave a lot of points out there, and then at times defensively we take breaks. So once we put it all together - we haven’t put four quarters together yet.”

Virginia Academy (3-2) closed the gap to 10 points at the half, but couldn’t overcome their slow start.

Offensively, the team was hurt by the departure of 2020 win Marchellus Avery, who transferred to Core 4 Academy (Ga.) earlier in the week to play with their post-grad team.

“We just didn’t show up to play today,” Patriots coach Joe Posey said. “We didn’t play defense, didn’t rebound, didn’t share the ball. I know some of the guys are going through some emotional stuff - we lost a player this week who was a key to us a little bit, and I think now guys are trying to redefine roles and things like that and they’re getting caught up on the offensive end, and on the defensive end we were asleep. We showed up in spurts and made it 10 points, 11 points, 9 points, things like that, but then it would go right back to that same lull and we just could never get out of it. So we’ve got some work to do.”

Bowie (2-0) built an early lead and maintained it throughout, denying Osbourn Park (2-1) everytime it seemed ready to make a significant run. It seemed like most of those stops came courtesy of Salisu, who made his impact in the paint, shooting 10-of-12 from the field with several big dunks and timely offensive rebounds.

“I feel like that’s what I’m about to do all season, and people should just watch out,” he said. “Bowie for the state championship, 2020.”

The Bulldogs got a balanced scoring effort from the rest of their roster, with Jaden Faulkner posting 9 points, Hamilton Gbugu 7 - with 7 rebounds - and Taimon Jones and Jacob Morgan going for 6 apiece.

OPHS coach Jeremy Coleman said his team’s youth showed in the second half, particularly in the final minutes.

“I think towards the end, we felt like we had to take the really quick, fast shot as opposed to being a little calmer about it and finishing,” he said. “A six-point game with a minute and a half left is a lifetime. But Bowie did a good job of making us think that we had to get it all right now. They did a good job of doing that and they did a really good job of keeping us off the boards. So if you ask me what hurt us, I’d say the boards and the 50/50 [balls] really were the main difference.”

Bowie out-rebounded Osbourn Park 36-28. Coleman said that in a one-point win against WT Woodson earlier in the week they lost the rebound battle by one, while in a season-opening win against Colgan they won it by 15 boards.

“There’s a correlation in that,” he said. “But tonight, we just didn’t have it. I will say some guys did come in and hit some timely shots, and they came in cold. So if I need to pick some great positives out of that, I know that I can call on some guys who are fresh off the bench to come in and light it up from the perimeter. This was a good test for us; Bowie’s a good team, and chances are we’re not going to face that type of intensity and that type of aggression and play this year. I think it’s going to serve us well as we get closer to our conference.”