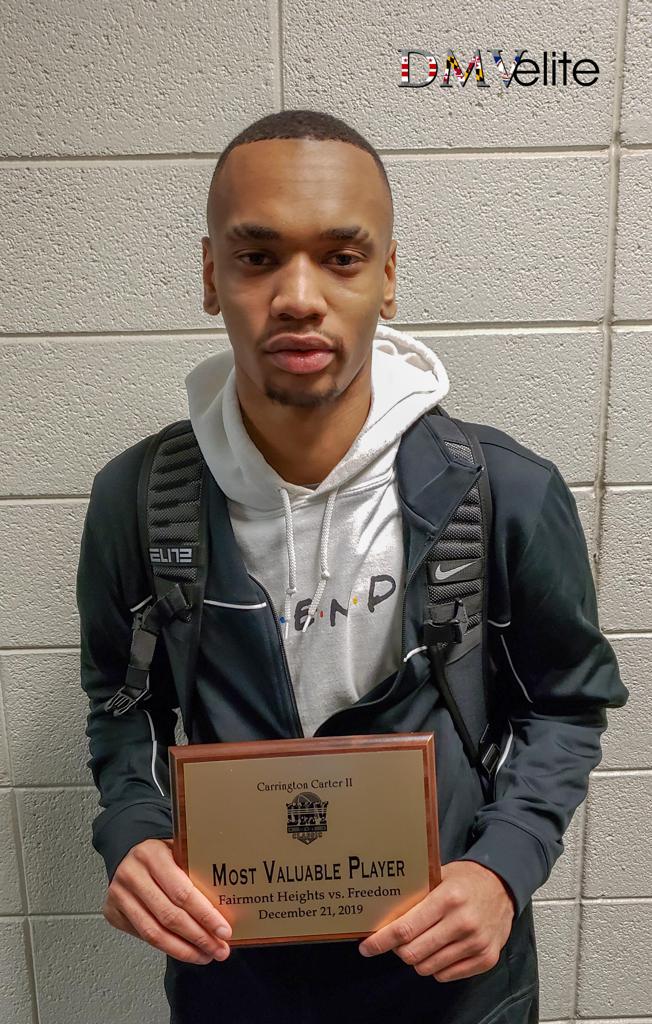 WHAT HAPPENED: Fairmont Heights (Md.) jumped out to an early lead behind 2020 guard Keyshawn Johnson and never looked back en route to an 89-65 victory over Freedom-Woodbridge (Va.) in the 8th Annual DMV Tip-Off at North Point High School in Waldorf, Md. on Saturday.

“We had a good practice the day before,” Johnson said, “and [Fairmont coach Chuck Henry] was just pushing us and telling us we had to start out fast and push the other team and make them play to our standards. It was a good way to start the game off.”

A transfer from Archbishop Carroll (DC), Johnson posted 37 points in a blowout win over College Park Academy in the Hornets’ previous game, so the high point total was nothing new. The Eagles simply had no answer for him defensively, as he knocked down 3’s off the dribble, off the catch, stepping back, and even pulling up on the break.

“It’s been real good,” he said of the move to Fairmont. “Coach pushed me and made sure I’ve got to pick up everything since its my senior year and it was a big transition.”

In addition to his shooting, the 6-foot-2, 167-pound Johnson has found other ways to fit in at Fairmont.

“He’s the life of the party at all times,” Henry said. “He has an infectious energy, and guys really feed off him both on and off the court. Whenever you see Keyshawn, he’s probably got about six or seven players around him at some point. So he’s been really great for us, and I think he’s elevated the games of some other guys around him and made them a lot better, because he spaces the floor so much. Having guys to space the floor, [other] guys are able to get to the rim with ease, so he’s truly helped Markel, but I think the guy he’s helped the most is Delonte Raynor, the young sophomore we have who we’ve trusted to play point guard for us this year. So Keyshawn’s been really great for us, man, we’re really encouraged by what he’s given us and honestly I think he hasn’t even scratched the surface of how good he can be.”

Indeed, Fairmont is looking like it might finally be the right situation for the well-traveled Johnson, so spent his freshman year at Paul VI and his sophomore year at Wise.

“Absolutely, Henry said. “His grades are higher here than they’ve ever been in his life. In fact, he made Honor Roll for the first time ever, and I think he had a 3.75 [grade point average], so I’m really proud of the work that he’s putting in.”

Fairmont trailed only briefly, jumping out to take a 24-9 lead after one quarter. The Hornets were never seriously threatened after that.

“Yeah,I don't think they thought we were going to start off like that,” Johnson said with a smile.

For Henry, that opening salvo was a welcome sight.

“The first three games of the year, we started out really slow,” Henry said. “In fact, that was what we said coming out of our huddle: ‘1,2,3, Start fast!’ So that was something that we really keyed in on, because we know how hard [Freedom] fights. We watched a little bit of film on those guys, and they got down 20 to Battlefield and fought back to a two-point game and almost had a chance to make some plays to win it. … So we wanted to start fast and make sure we scored the first basket and get three stops in a row and make them take the first timeout, and I think we were able to check all three of those boxes today so I was really proud of the guys.”

FAIRMONT BACK IN THE 1A HUNT

The Hornets have emerged as a perennial state title contender under Henry, winning the Maryland 1A State Championship in 2017 and finishing as runner-ups the following year.

They fell in the opening regional round last season, but this year, it’s looking like Fairmont might have another crew capable of making a deep state run.

“I love this group,” Henry said. “I’m really encouraged by the leadership that we have coming out of this group, led by Markel Norman, and then Keyshawn Johnson, Dequan Thomas, whose our defensive anchor, and then we’ve got a bunch of young guys who really come in and play their role. So for us, it’s not about building anymore. At this point, it’s about continuing to build up, ’cause the foundation is already there. We don’t have to try to build the foundation anymore - the guys know what the program is and at times its on autopilot. So when we have opportunities like that - we had eight days off - so at that point we can really start to build the house and so that foundation having been strong over the first four years, now guys were able to get in the lab and really put in work on their skillset, and I think what people saw today is our skillset is improving.”