Corey Dyches led the Wolverines to victory against their Virginia counterparts. 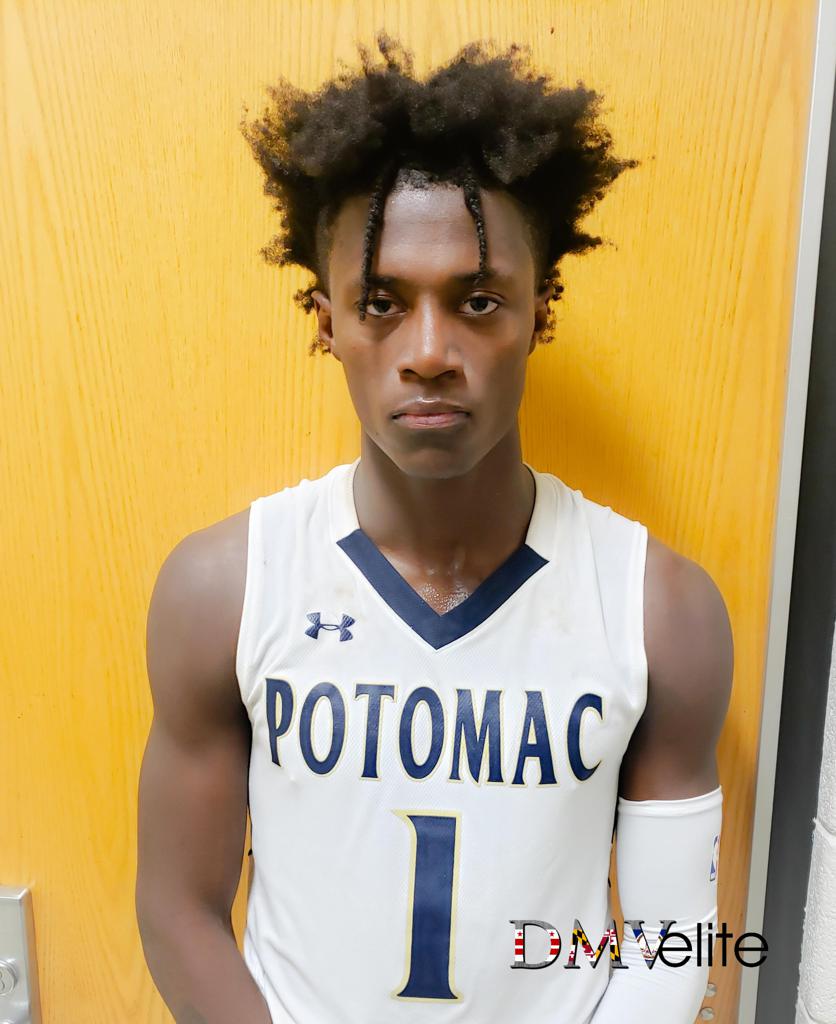 WHAT HAPPENED: Potomac (Md.) outscored Potomac (Va.) 23-16 in the fourth quarter to pull out a 65-55 victory in the 8th annual DMV Tip-Off at North Point High School in Waldorf, Md. on Saturday.

2020 guard Corey Dyches led the Wolverines with 22 points and 10 rebounds in the victory, while 2020 guard Jordan Beckett added 21 points and 2020 guard Duane Mason finished with 13.

Dyches finished with a team-high 22 points and 10 rebounds, and provided a steadying leadership presence when Potomac (Va.) started making a serious run to trim the lead.

“They were a pretty decent team - probably the best team we’ve played so far,” Dyches said. “[The key] was just playing together, moving the ball and getting open shots, because they were coming under for charges, so we had to work on kicking the ball out and finding our teammates so that the refs couldn’t make that call.”

A Maryland football commit, Dyches and several of his teammates are still rounding into basketball shape after a long football season that included a runner-up finish in the Maryland Class 3A Final.

“We’ve only had about five practices together because we’re coming off a state championship - some of the people that  were on the football team,” he said. “So once we get it going, we’re going to be one of the best teams in the area. It’s a really athletic team and we can get it and go - that’s what they weren’t used to, speeding the game up and getting it out and that’s how we were able to win.”

With his college recruitment wrapped up, Dyches has turned his attention to crossing a few final items off of his high school basketball wish list.

“I’ve got about 800 points; I’m ready to score 200 points more so I can get my 1,000,” he said. “That’s one of the main goals, but also a state championship; we came up short in the football championship not too long ago, so that’s my main goal, really - a championship.”

2020 guard Jordan Beckett came to Potomac (Md.) from Takoma Academy (Md.) in the offseason, but he fits in alongside the Wolverines like he’d been running with them for years.

On Saturday Beckett served as a nice counterpart to Dyches, going for 21 points on 8-of-12 shooting, including 2-of-3 from deep.

“It’s definitely been great,” he said of his transfer. “These are a lot of guys who I’ve known - especially the coaching staff and Corey - so it definitely made me feel at home and it made me feel confident. The transition was very smooth for me; they made it as smooth as they could.”

The 6-foot, 190-pound Beckett gives the Wolverines a solid scoring option who can also run the offense when needed.

“The strengths of my game are I’m a willing passer, I can get to the basket, I’m very strong and I’m very savvy with my dribble, and my IQ,” he said. “The biggest things I want to work on are shooting off the dribble, being more poised in situations, handling the ball in big situations and just believing in myself, really.”

WOLVERINES IN THE ZONE

“My coaching staff and I, were able to go see them [Friday] night against a solid Forest Park team,” he said. “We noticed some tendencies over in Va.; they run a lot of man - it was all man - so I wanted to experiment and see how they’d go against all zone and it paid off. I wanted to go into man and we did that a few times, but I wanted to stick with the zone against them.”

Johnson said his team usually plays half man and half zone, so it wasn’t a complete departure from the norm. When asked to gauge the potential of this year’s squad, Johnson said it was still a bit early to say.

“This group has only been together about fully for about seven days because of football,” he said. “Our main staple is Corey Dyches, of course, but Jordan Beckett had never played for us and he’s going to be an integral part. No. 5, Duane Mason, is actually up from the JV from last year, but he can shoot it and is a good player. But I would really like to evaluate us in late January, early February, and I think we’ll be a lot different team by then.”

Potomac (Va.) coach Keith Honore called “self-inflicted wounds” the key to Saturday’s loss, saying his team (6-2) made too many miscues in critical situations.

“When you play a team with that type of talent and that type of athleticism, you can’t make a lot of mistakes, and I thought we made a lot of mistakes,” he said. “I thought once we settled in early and got adjusted to the shot clock and we got adjusted to the speed of the game - we actually took the lead by one - [then] we came out there in the third quarter and missed three straight layups and turned the ball over twice. You can’t do that against good teams. So, this is a great learning experience for us; if we want to go deep into the playoffs, we’re going to play teams like that, and we’ve got to learn how to be successful in pressure situations.”

Despite the setback, Honore said he liked the toughness he saw in his young team. Up next for the Panthers is a matchup with Oakdale (Md.) at the Governor’s Challenge in Salisbury, Md.

“We’ve made great strides as a team,” he said. “We were a really immature team - and we still have some immature moments - but last year when a team would punch us in the face like they did, we would have got beat by 25, 30 [points]; we’d have just laid down. So they’re showing growth and maturity, and I loved our fight - I think our kids played really, really hard today. I’ve got to do a little bit better job of coaching them up in those pressure situations. So we’ll go back to the drawing board next week, put them in those types of situations, and teach them how to be successful in those moments.”

EVEN IN DEFEAT, HARRIS SHINES

The Panthers couldn’t complete their rally, but 2021 wing Tyrell Harris looked good in the attempt, finishing with a game-high 23 points while also grabbing 9 rebounds.

Harris impressed with his versatility, which Honore said allows the team to move him all over the floor. Honore said he can play Harris at the point or on the wing if there’s a mismatch, and Saturday he operated primarily out of the high post to allow him to work closer to the basket against the Wolverines’ zone.

“I expect his recruitment to pick up here real soon,” Honore said. “There’s not a lot of 6-6 kids that can do what he can do. He can score it on all three levels, and he was really good around the basket tonight. That long, wiry, athletic zone like that will cause you some problems - and it did - but as well as he played tonight, there’s still a lot more there, you know what I mean? I think if you’re a college coach, you can see that there’s a lot more there.”