A look at some top performers and storylines from Day 1. 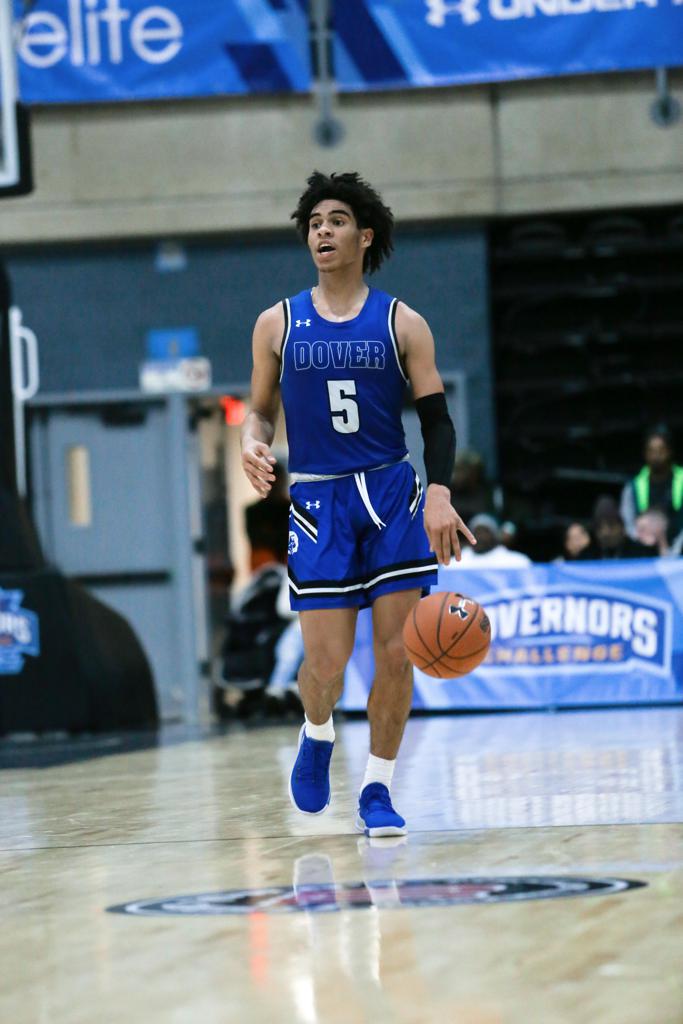 SALISBURY, MD - Dover (DE) 2020 guards Elijah Allen and Eden Davis form one of the most prolific backcourt tandems in the state -  a formidable one-two punch that terrorizes opposing defenses.

So when Davis - a Texas A&M Corpus-Christi commit - went down with a early ankle injury, it was Allen who picked up the slack, tallying 16 points, 6 rebounds and 5 assists to lead the Senators to a 66-50 victory over Wicomico (Md.) on the opening day of the 2019 Governor’s Challenge at the Wicomico Youth & Civic Center.

The 6-foot-1, 185 pound Allen lists a Division I offer from Southern Utah and D-2 offers from Caldwell (NJ) and St. Michael’s (VT).

Thursday’s matchup between Dover and Wicomico was one of the most highly-anticipated of the event’s opening day, pairing two successful programs - each was a state runner-up last year - that have intriguingly never met despite being fairly close geographically.

Dover ended the drama early, though, jumping out to an early lead and never trailing. They went up 16-4 after one quarter and led by 17 in the fourth quarter.

“We expected a big crowd and it gave us intensity, '' he said. “It gave us more energy, you know? The bigger crowd, we had to put on a show for them. So we just came down here and did what Dover does.” 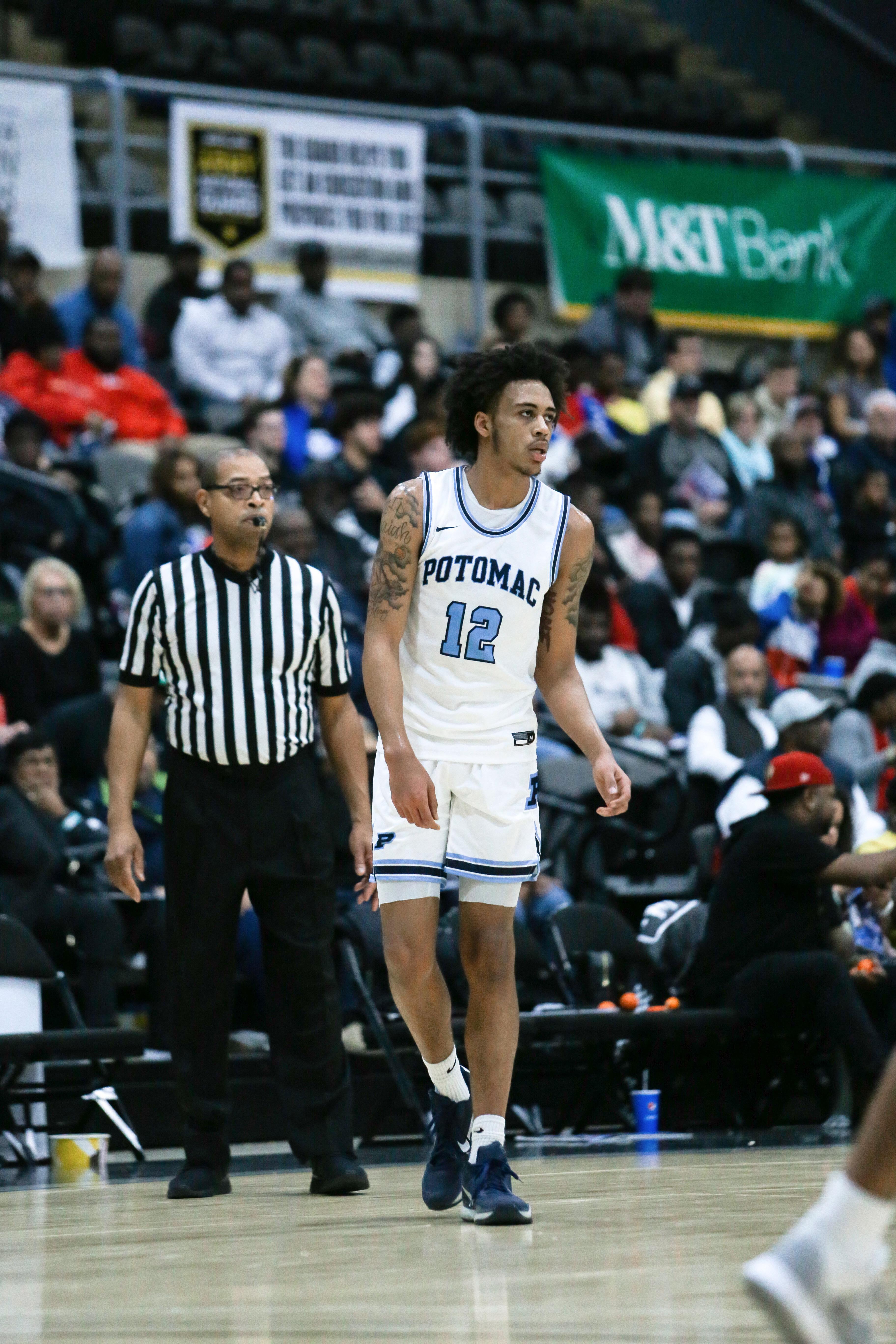 POTOMAC HOLDS ON AGAINST OAKDALE

Going into the locker room at halftime with a 35-15 lead over Oakdale (Md.), the Potomac (Va.) Panthers felt good. Maybe a little too good.

Things got interesting in the second half as the the Panthers had to weather a furious Oakdale rally to pull out a 63-58 win.

“We did get too comfortable,” Potomac 2021 wing Tyrell Harris said, “but we found a way to fight back and get the win. This definitely could benefit us [in the long run]; we’ve just got to play together and stay strong.”

Oakdale 2020 guard Jack McGaha had 18 points and 2020 guard Tommy Kelly 15 for the Bears, who trailed by as many as 23 points in the first half. They stormed all the way back to cut the deficit to 55-53 with 1:58 remaining in the fourth quarter, but couldn’t fully close the gap.

“We had to play defense, that’s what [the key] was,” Harris said. “They started hitting shots in the second half and we had to lock up and play defense and get it back.”

The second half let-up has been a bit of a theme for the Panthers so far this season, according to PHS coach Keith Honore.

“Out of our nine games we’ve played, four out of the nine we’ve had large leads at halftime,” he said, “and we’ve come out in the third quarter and we’ve surrendered that lead in the first three, four minutes of the third quarter. Going into January, we have to get better at that, and we know that. We all acknowledge it, we all understand it, and I think today was another wakeup call that look, we may not be so lucky during a crucial game - not that this game was any less crucial, but you don’t want to go into the playoffs or go into the conference with this type of issue and not fix it. So once again, it’s about getting better, and I think we did a lot of good things today, and I think we got better at some things. Like self-inflicted wounds, I don’t think we had too many of those today, but we do have to get better coming out of halftime and putting our foot on people’s necks.”

Brock Davis and Montez McNeil felt like they could exploit their size advantage against a smaller Stephen Decatur (Md.) team, and once they started to in the second half, there was no stopping them.

The game was tied at 23-23 at halftime, but Georgetown Day controlled the second half to pull away for the win.

“Our mentality when we have the advantage is just to put our foot on their necks,” Mathis said. “So knowing that we had the advantage, we were able to come together and just really lock in as a team offensively and defensively. We were able to play our offense out of our defense, which is always great for us.”

Georgetown Day is back for its second year at the Governor’s Challenge but its first under new coach Carl Parker, who came over from Sandy Spring Friends (Md.) in the summer. So far, he’s managed to get his players to buy in.

“I love him as a coach and I mean, he always brings the energy,” Mathis said. “For whatever reason, he’s always able to put us together as a team and really from this year compared to last year, we play way more as a team than we did last year, and I feel like a lot of that has to do with him and the energy he brings in practice and on and off the court.”

“I think it was just effort,” Collins said. “We made all the effort plays; we got on the floor and we just really got after it in the second half.”

Collins finished with a game-high 22 points for the Vikings, who were tied with Huntingtown at the half (25-25) and trailed 43-39 after three quarters before closing strong.

“I think my jumpshot really was going well in the first half,” Collins said, “and in the second half I just got everyone involved, which really set us off.”

SJCP coach Stu Wilson said the win was a good confidence booster for his squad, which came into the season with high expectations but has dealt with a few tough losses and injury issues. Collins agreed.

“It feels great,” Collins said. “We came from a drought and we really wanted to come in and get a win.”

Osbourn Park (Va.) 2020 guard Ethan Wilson - who nearly set the Governor’s Challenge single-game scoring record last year in a bracket title victory - was hot again in this return trip, finishing with a day-high 38 points in a 69-61 loss to Linganore (Md.) … 2021 guard AJ Switzer poured in 30 points for Frederick Force, which won its Governor’s Challenge debut 66-51 against Worcester Prep and will face Salisbury School for a bracket championship Friday at Wicomico High School. … Another pair of Governor's Challenge newcomers met in the final game of the day at the University of Maryland-Eastern Shore, with Piedmont Classical (NC) holding off Colegio San Felipe De Areceibo (PR), 64-55.