A look at some top performers and storylines from Day 5. 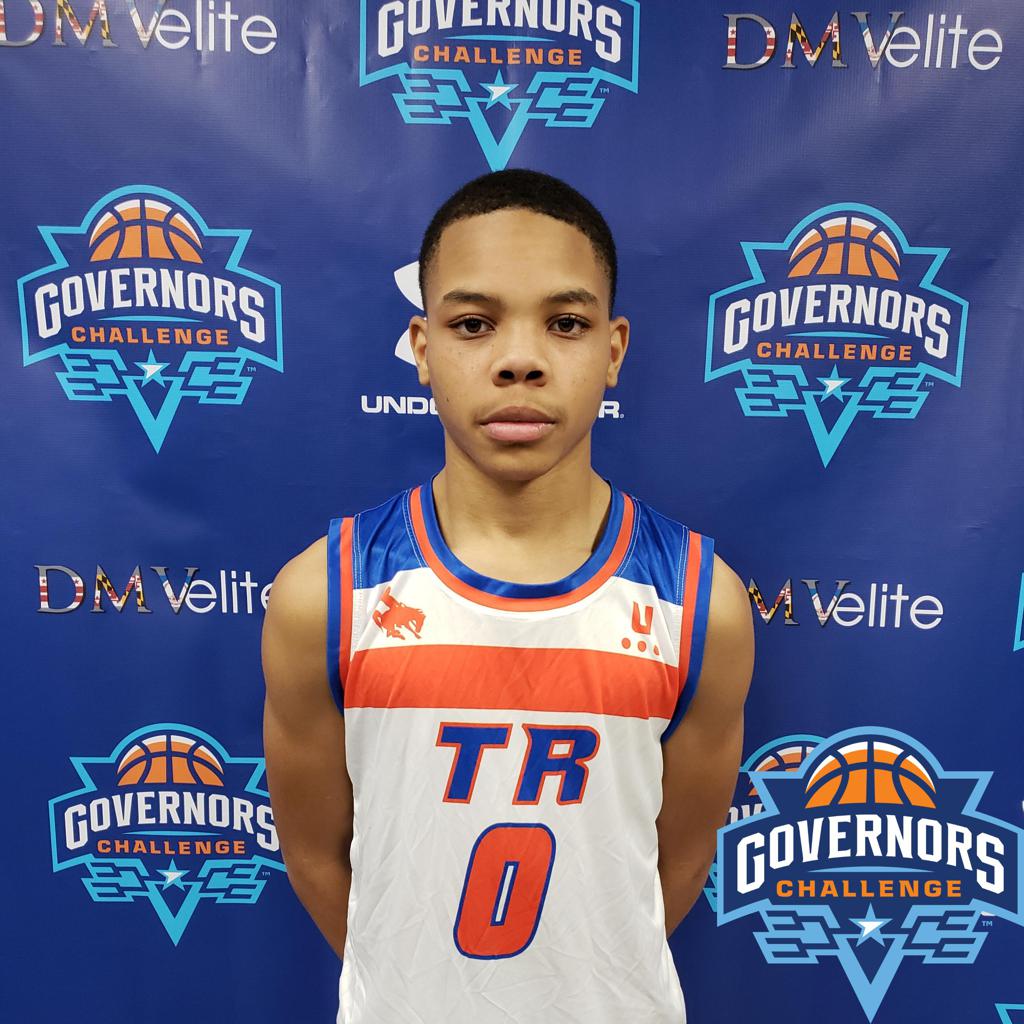 “We always wanted to play fast, we just haven’t been as deep in a couple of years,” Nickens said. “We just want to push the pace and we want to play fast and we’ve got enough athletes to be able to shoot the ball fast in transition - we want to get a shot up in nine seconds. If we can play like that, man, I love it; it’s fun and it’s great basketball and the kids are playing very hard.”

The new-look Rough Riders were on full display at the Governor’s Challenge, capping their trip on Monday by absolutely blitzing Arcadia (Va.) 93-48 to win the Bracket 17 Championship game at the Wicomico Youth & Civic Center to improve to 13-0 on the season.

Roosevelt led just 13-8 after one quarter, but blew the game wide open in the second, outscoring Arcadia 38-16 to build a 51-24 lead at the half.

2020 forward Arande Johnson had 13 points to lead the Rough Riders, who got 11 apiece from Tremble and 2020 center Marcel Gabriel. Overall 14 different players saw action, with 13 of them scoring.

“Everybody says they have a starting five; we have a starting 15,” Nickens said. “It doesn’t matter; as you saw the first substitution pattern, it was five guys. So with that being said, there’s no ‘starters’ - everybody’s a player in the program and that’s what we believe.”

Roosevelt beat Archbishop Curley (Md.) in their Bracket opener on Saturday, outscoring the Friars 29-14 in the second quarter to seize control.

“It’s always playing fast and I love to play fast,” said Tremble, a transfer from Archbishop Carroll (DC). “Like, at Carroll, everything was ‘Slow the ball down, run these sets,’ but with Coach Rob, I love that he plays fast and we press the whole game, no matter what. We could be up 20, we could be up 30 - we’re going to pressure you and we’re going to keep the pressure on. The system has worked so far all season, and that’s why we’re 13-0."

Despite their unbeaten start, Nickens said he and his team are focused on taking a measured approach to the rest of the season.

“One game at a time, that’s always the plan,” he said. “I can’t say we’re not sitting here and looking at playing deep in February - that’s what we do in this program - but God has humbled us enough to let us know that we need to take it one game at a time.”

Lethon Williams had 15 points to lead the Firebirds, while Jaden Hope finished with 14.

After what he called his team’s worst game of the season Friday in a six-point loss to Friends School of Baltimore, Landon (Md.) coach Hajj Turner knew he needed a more simplistic approach. So, in their remaining two games at the Governor’s Challenge, Turner allowed space for freedom on the floor and empowered his dynamic backcourt to operate creatively.

That philosophy so happened to pave the way for Landon’s best two games this season to date, as the Bears exploded for 81 points in an 11-point win over Gilman on Saturday and a 79-67 win over Lake Nona (FL) to win the Boys Bracket #15 title on Monday.

In the 12-point win over Lake Nona, Landon drilled 13 of its 24 attempts from behind the arc and had 19 assists in relation to three turnovers.

“We made a conscious effort to play faster and free,” Hajj said. “There was too much thinking [in the loss Friday]. I was doing too much coaching. It worked. The guys played well. We shot the ball well. … We took better shots.”

“To come back after our worst performance of the year to play easily our best two games of the year is really encouraging for me,” Hajj added.

That level of efficiency allowed the Bears to overcome large deficits in the rebounding department (46-26) in the second-chance scoring department (28-6). 2020 guard Canin Reynolds and 2021 guard Kino Lilly Jr. also enjoyed big outings in the two victories, as Reynolds poured in 32 points on six 3-pointers Saturday and Lilly put up 24 on four 3-pointers Monday.

“We’re a hard-working team, but we have limitations,” Hajj said. “The only way we can beat a talented and huge team like that is to move the ball and get great shots. We did a horrible job on the glass. But when you have 19 assists and only three turnovers, you can negate some of that stuff. We made them work for all their buckets. It was a complete, collective team effort.”

Lilly had 13 of his 24 points come in the first half on Monday, as the junior guard helped the Bears stake a 43-31 halftime lead. Lake Nona opened the second half on an 11-2 run to make it 45-42, but Lilly halted the scoring skid with a pull-up 3 to make it 48-42. Then, on the next possession, Lilly grabbed an offensive rebound and kicked it out to Reynolds for another trey to extend the lead to nine.

“Kino played a helluva game,” Hajj said. “We got cooking early and late. He’s had to guard when he gets into a rhythm. He’s a true combo [guard]. He can navigate off ball screens and he can spot up in the corner … He does it all. Defensively, he’s diverse. He can guard multiple people. He’s tough and a creative scorer.”

When asked about his performance, Lilly said. “The team got me into what we had to do. They allowed me to get buckets.”

In terms of his recruitment, Lilly holds offers from Brown, Stony Brook and Bryant, and hopes to garner more interest as the season unfolds.

“They like the way I can score and play make,” Lilly said. “And they want me to work on my on-ball defense and rebounding.”

COLONELS HOLD ON FOR BRACKET TITLE

The final minute of Sunday’s Bracket 18 title game between Colonel Richardson (Md.) and Ben Franklin (Md.) had enough drama for an entire game - not all of it on the court.

A mix-up at the scorer’s table left both teams debating one point on the scoreboard - it was eventually determined that Colonel Richardson had mistakenly been given a point earlier - and a four-point Colonels lead suddenly became three, giving the Bayhawks an opportunity to tie with less than 10 seconds remaining.

The Bayhawks wouldn’t capitalize on the opportunity, though, and the Colonels hit one two free throws to rebuild their lead lead to four and after a late 3 - one that saw a Colonel Richardson defender stray dangerously close to the shooter as the Bayhawks lobbied for a foul call - they had won 48-47 to claim the Bracket #18 title.

“They were trying to get in our heads,” CRHS 2020 guard Diante Dickerson said. so we just had to keep our mindset straight and just have our eyes on the prize so we could win this championship.”

2020 guard Rakai Jones had 13 points to lead the Colonels, while Dickerson tallied 11 points and 11 rebounds.

“[The key was] just to get the ball down the court and be patient with it,” Jones said. “Don’t turn it over or nothing like that; just calm down and believe in yourself that you can do it, and we got it done.”

Ben Franklin led 24-18 at the half and 34-27 after three quarters, but Colonel Richardson seized control in the third quarter outscoring the Bayhawks 21-13.

“We were able to put a little bit of pressure out there to make them run some clock at the beginning of their possessions,” CRHS coach Brad Plutschak said. “They just started getting kind of comfortable against what we were playing, so we just wanted to disrupt it a little bit. And the guy hit big shots and took care of the ball when we needed to. So I’m really proud of them, they all played really well and this team’s been working hard. We only had 8 guys get on the bus today, and it worked out just fine.”

The win capped a strong Governor’s Challenge trip of the Colonels, who overcame Ballou (DC) in their opener on Saturday to set up the title game meeting with Benjamin Franklin.

“We were glad to play them, they were a physical team and they’ve got some really good players,” Plutschak said of the Bayhawks. “The last two opponents, we thought were good for us during the break. Playing some city teams - one from DC, one from Baltimore - they were a little bit more physical and a little bit bigger than us at some spots, so I’m proud of them.”

Monday marked the beginning of girls’ play at the 2019 Governor’s Challenge - Tuesday’s final day is all girls’ games - and there were plenty of impressive performances on Day 1.

In action at the University of Maryland-Eastern Shore, Frederick (Md.) 2023 guard Yanniah Boyd made a free throw with 2.5 seconds remaining to lift the Lady Cadets to a 44-43 victory over Winston Churchill (Md.). Later in the day, Parkside (Md.) double-double machine Jacqueline Wright posted 20 points and 10 rebounds to lift the Rams to a 51-48 win over Linganore. 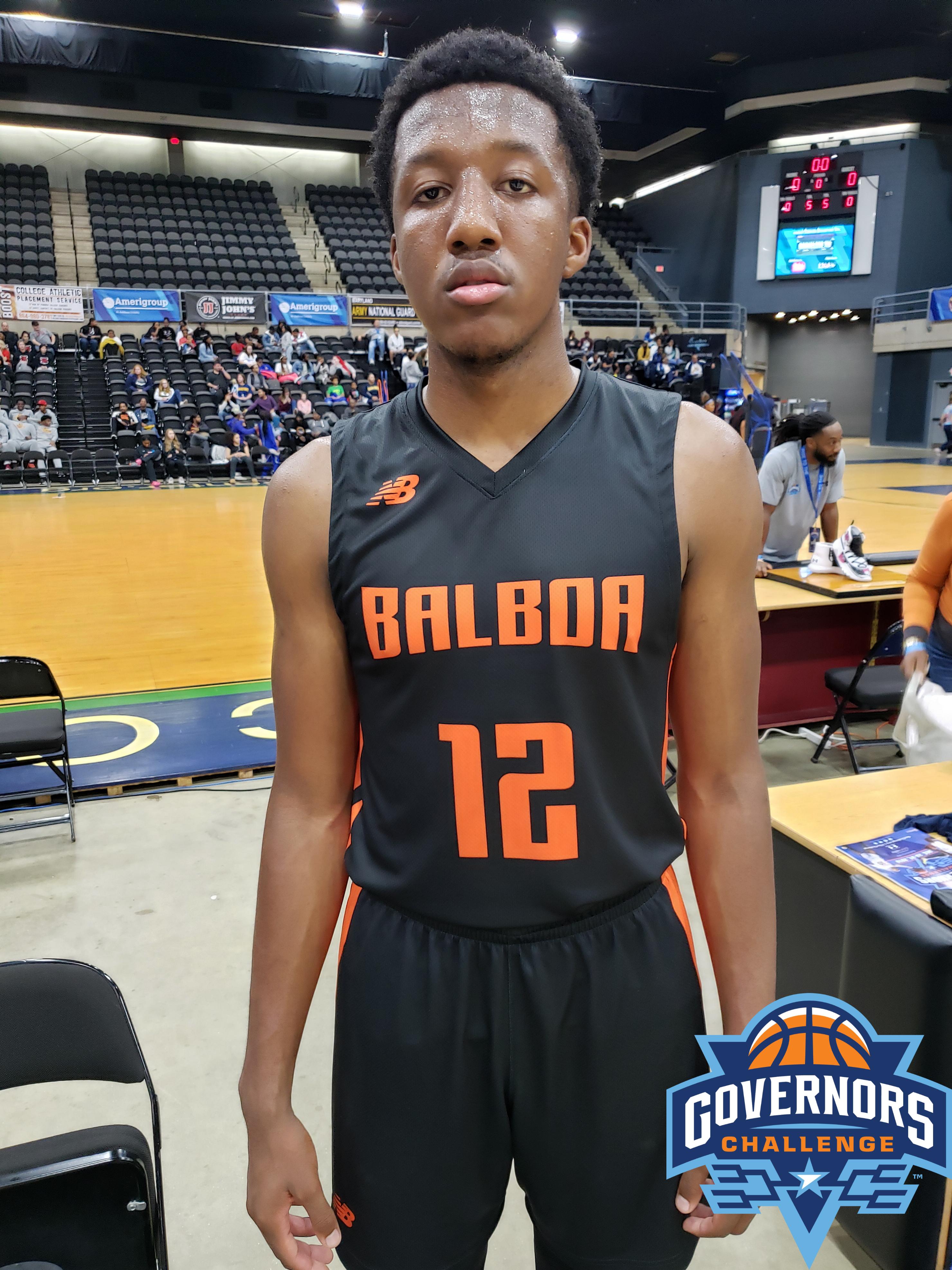 In a week that saw teams from Canada (Father Henry Carr) and Puerto Rico (Colegio San Felipe De Arecibo) compete, it was the Balboa School that made the longest trip.

The San Diego, California-based Bengals based Bengals had a solid East Coast swing, going 2-2 in four games at the Governor’s Challenge.

“It’s a real good experience to come here,” Balboa 2020 guard EJ Neal said. “We’re really blessed to have our coaching staff take us all across the country to play basketball. It’s a privilege, and we just wanted to come out here and play our best in front of everybody.”

The Bengals opened with a tough 62-55 loss to Liberty Heights (NC) on Friday, and followed it with a 55-46 win over New Hope on Saturday and 60-49 win over St. Andrew’s (RI) on Sunday. Balboa closed with a 47-43 loss to Legacy Early (SC) on Monday in the final game of the Boys DMVelite Showcase Division.

Neal, 2021 guard Lenz Dupont and 2022 forward Daniel Ameyaw were among the standouts for Balboa all week.

“It helps us,” Neal said of the trip, “ because we play good competition all year long, so it helps us grind and get a feel about all the other teams we’re going to play in the future.”

St. Albans (DC) 2020 wing Michael Katsock has emerged as one of the Bulldogs’ most indispensable players, and he showed why in their 46-39 Bracket 16 title win against William Penn (DE).

The 6-foot-6, 190-pounder posted 17 points and 7 rebounds to help the Bulldogs pull away after falling into an early hole.

“I felt like I was just really locked in,” he said. “I tried to box out and rebound a lot and if we didn’t have a fast break, get a good shot and take my time and get in a flow on offense - midrange, free throws, 3’s, at the rim.”

John Ford added 11 points for St. Albans, which capped a successful trip to the Eastern Shore.

“It was big for us,” Katsock said. “We’ve got a lot of young guys, and I think it’s really big for us to come together as a team and work on our communication - that was big, and I think we got a lot better at that. Trusting each other more, trusting open shooters and boxing out and playing good defense.”