Mark and Mike Aiken led the Warriors to a comeback victory. 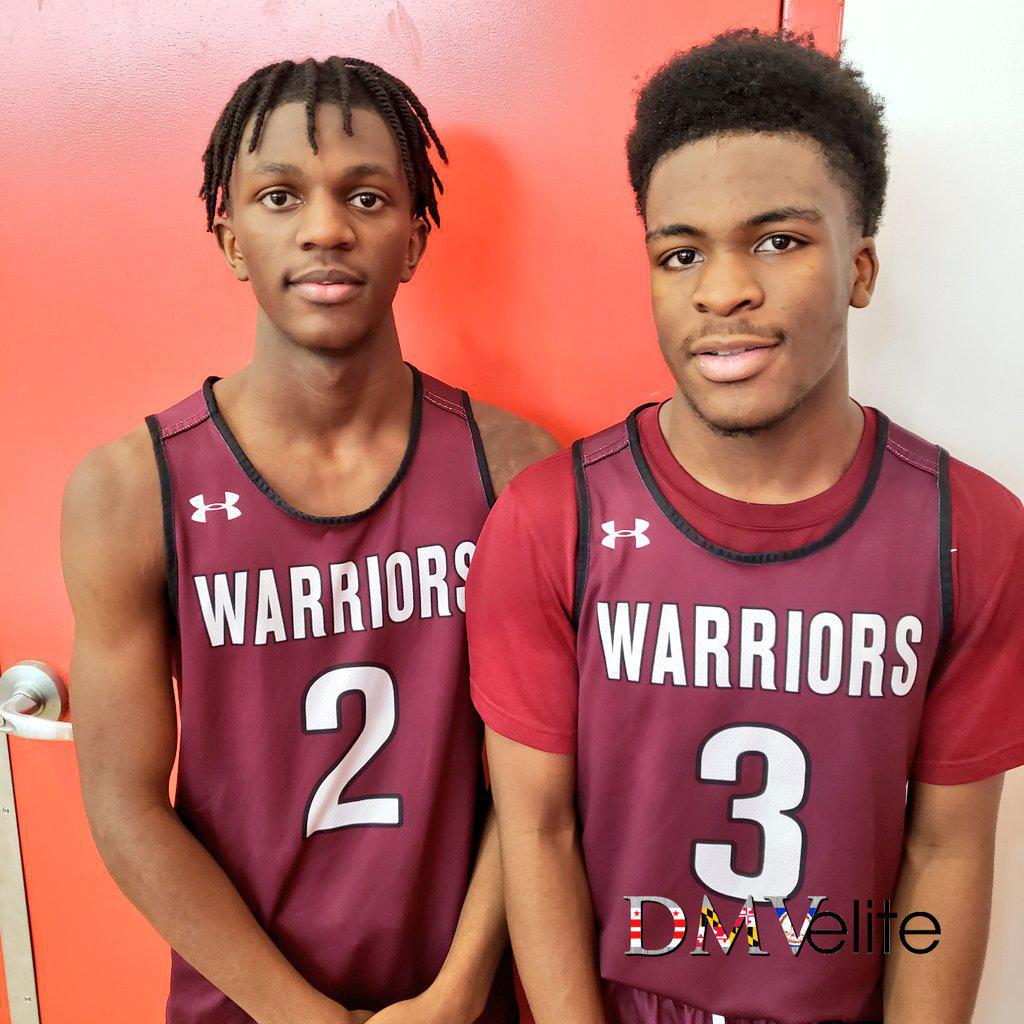 WHAT HAPPENED: Thurgood Marshall Academy (DC) rallied back after a rough offensive start to down McKinley Tech (DC) 45-42 on Saturday January 11 in the Uptown Hoopfest at Elizabeth Seton High School in Bladensburg, Md.

Both offenses started slowly, with TMA leading 10-7 after one quarter. Tech came alive in the second quarter, outscoring Thurgood Marshall 16-8 to take a 23-18 lead into the locker room at halftime.

“It was not a  great shooting performance,” TMA 2021 guard Mike Aiken said. “We were missing shots that we normally make, so we just had to go play some better defense.”

McKinley Tech went ahead by 10 (32-22) on a 3-pointer by Terrace Webster midway through the third quarter. That’s when then Warriors started to make their move, though, with Aiken hitting a deep 3-pointer to beat the third quarter buzzer and trim the Tech lead to 35-32.

Aiken’s twin brother - 2021 guard Mark Aiken - opened the fourth quarter with a 3 to tie the score at 35-35, and the teams battled down the stretch before TMA held on to seal the victory.

Mike Aiken finished with a game-high 19 points to lead Thurgood Marshall, while Stanley Marsh finished with 8. Mark Aiken added 7 points - highlighted by his game-tying 3 - and played strong perimeter defense down the stretch to help key his team’s rally.

“It was a slow start,” Mark Aiken said. “I was off, so I tried to do other things to keep our team in the game, like playing defense, getting stops and things like that.”

The Aiken brothers naturally complement each other well, but each has his own strengths, with Mike (5-foot-9, 155 pounds) excelling at attacking the basket and Mark (5-10, 140) preferring to make defenses pay from the perimeter.

Their recruitment is still developing, but both brothers said they’d have no problem splitting up in college if they had to.

“Depending on what level it is, we know it’s going to be hard for two undersized guards to play on the floor at the same time,” Mike Aiken said. “So depending on how the recruitment goes, if they want both of us, hey, we’ll go. But if not, we’ll separate because we’re both 1’s [point guards] for real, so it doesn’t really matter.”

The Aiken brothers led the Warriors on the court, but they took their direction from a familiar face on the bench - their father, Mike Aiken, Sr.

“Honestly, it’s a joy to coach them,” Aiken Sr. said. “Anybody that coached them prior to me or middle school or whatever teams they played on, every coach would tell you they just love the game and they’re easy to coach. You’re not going to get any feedback or no attitude - they’re going to do exactly what you need them to do. I’m just honored and privileged to have the opportunity to coach my sons, but they’re very enjoyable to coach.”

Aiken admitted to feeling a little nervous about coaching his sons initially.

“It’s always those things when you’re coaching your sons, ‘Aw, he’s showing favoritism, the only reason they’re doing that is their father’s the coach,’” he said. “Go back to previous coaches that they played for; the things they’re doing here is what they did for every other team they played for and every other coach they played for. So, the thing with me is - I know a lot of fathers say, ‘It’s hard to get my son to do what I do when I coach’ - [but] I don’t have that problem, they’re either going to do it or they’re going to be on the bench, as simple as that.”

The younger Aikens agreed with that assessment.

Together, the Aikens are focused on helping the Warriors make a deep playoff run this year.

“We’re getting better each game,” Aiken Sr. said. “We’re still trying to learn who we are and still trying to figure out our identity - which It’s kind of late in the game for, but that’s where we are. I mean, our strength is just playing defense. We’re a small team, so everybody has to be locked in every game defensively. Offense will come, but just getting them excited about playing defense every possession - we can’t afford to take a possession off when it comes to defense, so I think that’s our weakness and strength. When we do that, we play very well; when we don’t, we don’t know what’s going to happen after that.”

Jared Derricott had 17 points to lead McKinley Tech, while Ronald Grose and Khilil Biles had 7 apiece. Grose added 7 assists and Biles grabbed 10 rebounds. ... Tech outrebounded TMA by a sizeable margin (51-22) but turned the ball over 23 times to their opponent's 11.