The DeMatha (Md.) center is having a dominant senior campaign. 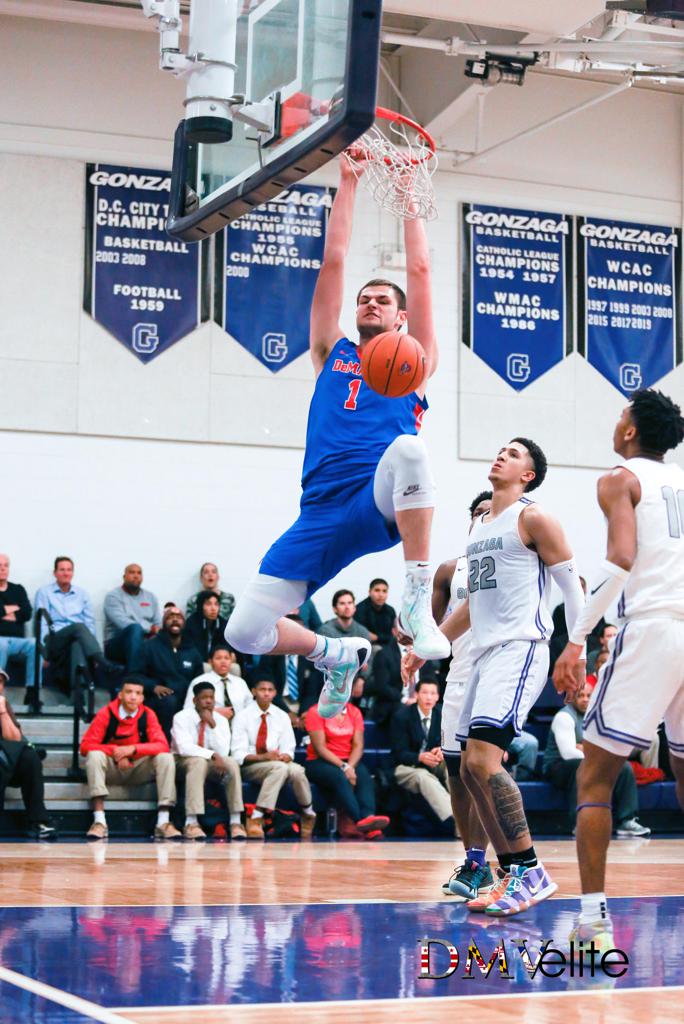 7-foot-2 DeMatha Catholic (Md.) 2020 center Hunter Dickinson has long been a productive and imposing force in the middle for the Stags, but this season he’s taken his game to a totally different level.

The University of Michigan commit is averaging 18 points, 12 rebounds and 2.5 blocks per game for the Stags, who are 26-2 and ranked No. 2 in ESPN’s National Top 25. Perhaps no game better displayed his ability to dominate than Tuesday’s 71-63 win over Washington Catholic Athletic Conference foe St. John’s College (DC), in which he dropped 40 points on 16-of-22 shooting from the field, including 3-of-5 from 3-point range.

I'd actually caught up with the DeMatha big man earlier that day to discuss his senior year season, his Michigan commitment, the pros and cons of being 7 feet tall, and more:

WHAT’S BEEN THE KEY TO YOUR SUCCESS THIS YEAR?

“I think just finally being consistent; I think that was the biggest thing for me. In my first three years I would have, like, a couple of big games but then some games I would disappear and only had, like, six or 8 points. I think this year I’m just consistently being there for my team and producing every night.”

WHAT ARE THE THINGS YOU WANT TO WORK ON?

“I’m working on just being a more consistent 3-point shooter, I think. That will just come with more reps and probably defensively just being able to move my feet a little bit better. I’m also working on that, so that will come in time as well.”

WHAT MADE MICHIGAN YOUR PICK?

“I think just Juwan Howard. Seeing him, it was pretty hard to not feel the love he has for Michigan, and he really wanted me to be able to experience what he’s experienced. And just him as a coach, he’s really personable and relatable. I know I can go to him if I have anything that I need to ask him about - in life in general, not even in basketball. And then the strength coach and the school were two other really big things: Coach [Jon] Sanderson, he’s one of the best in the country at what he does and the school has one of the best Business programs in the country, and that’s what I planned on studying, so it was an added bonus.”

DID YOU PLAN TO COMMIT WHEN YOU DID?

“I didn’t have a plan, really. Like, I just thought that eventually on one of the visits I would just feel it. I wish that had happened, but I just had to be most comfortable with the school, and I felt like Michigan was the most comfortable for me.”

“It is pretty crazy sometimes, because you get so, like, trapped into it and you kind of forget that these coaches are recruiting you. Like, when I was at Duke, I pretty much forgot that it was Coach K for a minute trying to recruit me to go there. I was just always trapped into, ‘This is just another Coach,’ but when you kind of take a step back and look at it, it’s pretty crazy how you’ll see them on TV one night and then they’ll be in your living room the next night trying to recruit you.”

DID IT HELP HAVING AN OLDER BROTHER WHO WENT THROUGH IT? [Dickinson's brother Ben played at Gonzaga, and then collegiately at Binghamton, Loyola Marymount and UNC-Greensboro.]

“Yeah, definitely. That was really helpful for Ben to go through it, so my parents, him - and even me when I was young - got to see kind of what it was like to be recruited and just stuff to look for: turn offs, turn ons, stuff that you don’t like already. It was pretty easy [for me] because I was able to kind of know what I liked and didn’t like in schools and what to look for in schools with my brother.”

“Video games are my biggest thing; that and hanging out with friends would probably be the biggest two things that I do. Madden and Call Of Duty, those are my two that I’m best at.”

WHO IS YOUR MADDEN SQUAD?

“I’m a big Bills fan, so I use them. My whole family is from Buffalo, New York - like, my parents and cousins and stuff - so it was kind of like that’s all I know, so I just became a Bills fan.”

HAVE YOU ALWAYS BEEN ONE OF THE TALLEST PLAYERS?

“Yeah, I’ve always been tall. I started out, like, I think 5-foot in second grade and then I would just grow three to four inches every year. I never had, like, a six-inch growth spurt or something like that in a year.”

“You just get used to people looking at you a lot and, like, just coming up to you and asking you questions. When I’m around people who aren’t used to it and they’re like, ‘How do you deal with that stuff?’ I mean, you just kind of get used to it, really. Always having to duck your head, that’s probably the worst thing - just hitting your head on stuff.”

HOW BENEFICIAL IS IT ON THE COURT?

“I appreciate it because I’m kind of used to it now - being, like, the taller guy. But now being 7-foot, honestly it makes the game easy for me, but it also makes me have to work even harder, because I’ve got to just make sure in this day in basketball that I’m still effective out there.”

HOW HAS IT BEEN PLAYING FOR SUCH A HISTORIC PROGRAM?

“I mean, it’s pretty great. I mean, I knew what DeMatha was - my brother went to Gonzaga - so I knew how good DeMatha was just as a brand, and that’s kind of what I wanted. Playing for Takeover, that’s one of the best AAU programs in the country, and so I wanted to do the same for basketball in high school. And so DeMatha just having that target on their back every year and every team - not only in the WCAC but in the country - trying to beat them was something that I felt like I was used to and it was something that I wanted in high school.”