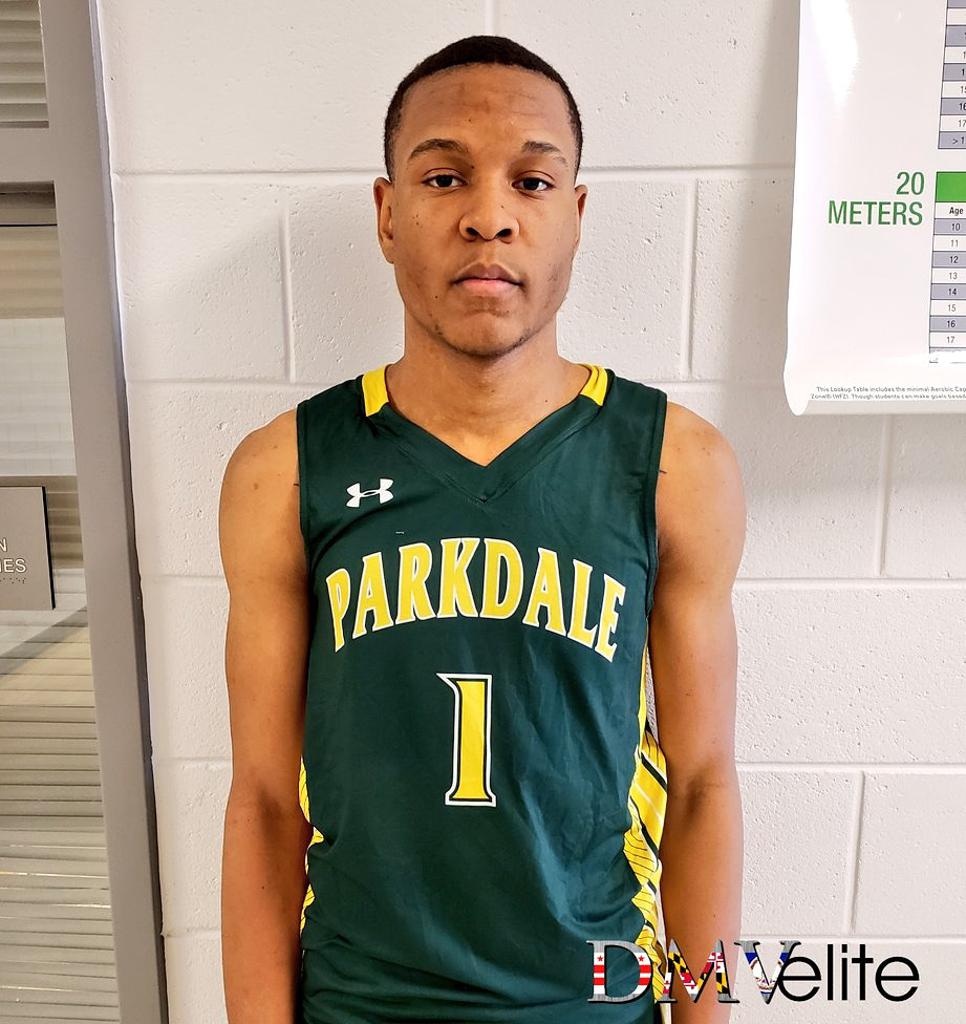 LANDOVER - The Prince George’s County Basketball Coaches Association brought its second annual PG Challenge to Fairmont Heights on February 14-15, allowing the county’s 4A squads an opportunity to face off against their 1A/2A/3A counterparts.

The 4A took the event 6 games to 3,  with Bowie, Parkdale, Suitland, Wise, Northwestern and Bladensburg picking up victories. Potomac, Oxon Hill and Douglass earned wins for the 1A/2A/3A.

Here’s a look at some of the action and standouts:

Baptiste scored 19 of his game-high 25 points in the second half to rally the Panthers to a 69-61 victory over Central in the opening game of Day 2 on Saturday.

Despite his slow start, Baptiste said he never pressed to get his offensive going, adding his points came within the framework of the Panthers’ game plan.

“It is hard because sometimes it’s like, “I need to get a bucket,’” he said. “But I know my team’s going to be like, ‘Come on, bruh, we’ve got to play together.’ If we play together we’ll more likely win than me being selfish, so we locked in and came out with the ‘W’ and that’s all that matters, for real.”

The 6-foot-4, 185-pound Baptiste has been a standout for Parkdale after transferring in from TPLS Christian Academy near Richmond. He started his career at PHS, so it’s been a nice capper to his career - and especially sweet given how it started.

“Ninth grade year I got cut from the team,” Baptiste said, “so I was just like, ‘It ain’t stopping me, so I’ve just got to go work harder,’ and now I’m trying to take my team to the championship. Battling back from that, it was tough, because freshman year I had a lot of friends that, like, made it and I didnt, so they used to clown me and stuff and I was like, ‘Alright, it’s whatever.’ I just got in the gym every day after school, and would just work out, work out, work out - everyday. So the next year I made the team and got better.”

That progress has continued, and PHS coach John Kamara said Baptiste’s return has been a major benefit.

“It just shifted the program a lot quicker than we expected,” he said. “Us not having him last year, we definitely struggled, but this year I think we’ve really closed the gap. You know, last year we were losing a lot of games by, like, 20-point margins, and this year I think we’ve only lost one game by over 20 points. So with him, it’s just changed the culture of the school and making Parkdale a competitor again and we’re getting wins. He’s a program changer.”

“I’m versatile - I can play, like, all five positions, I feel,” Baptiste said. “So I can bring the ball up and I can rebound against a big, so I feel as though that’s my strongest point. I’m a streaky shooter so I’m trying to get my jump shot more consistent, and once it becomes more consistent it’ll be deadly.”

Barnes had 23 points to lead the Rams to a 78-75 overtime victory over Friendly.

“Everybody played with confidence,’ he said of the win. “Everybody enjoyed the game and was having fun, and everybody was playing with passion, so I believe that’s why we came out with the win.” “I believe it’s going to give us a lot of confidence going into the playoffs, and it was a great win as a team.”

“His attitude is great, he comes to practice, and he’s gotten so much better from the first day,” McClure said. “At first he didn’t know what we did or how to fit in with us, but he’s used his reach and his length to become a good defensive player, and he’s taking the shots when they’re available. He’s just an overall asset to the team.”

McClure said Junior College programs are beginning to reach out to him about Barnes.

“I believe rebounding and being able to score with confidence [are my strengths],” Barnes said. “I want to work on my all-around game.”

His team fell just short in a 78-75 overtime loss to Suitland, but Bikoy was the best player on the floor for much of the game, finishing with a game-high 26 points.

“I feel like we played good,” he said. “We just have a problem with closing out games and I feel like that’s a lack of attention, but we’ll continue to get better and be ready for the playoffs.”

A transfer from St. Mary’s Ryken, Bikoy has provided a huge boost to the Patriots with his size (6-foot-4 190 pounds) and athleticism.

“Coming from the WCAC, I’ve learned that you have to win games - you have to be a winner - and that’s the mentality I come into the game with,” he said. “I’m not worried about myself and I’m just trying to win the game. That’s one thing that I’ve learned.”

Bikoy said he’s been hearing from Division II schools and junior colleges, but isn’t sure where he’s leaning yet.

Thomas had 22 points to lead the Pumas to a 71-69 win over Surrattsville in Saturday’s most frenetic finish.

“It was just a game of runs,” Thomas said. “They had their run, and I think we went on an 8-0 run and went up 9, then they fought back to go up 1. But we didn’t give up and we kept playing and kept fighting and we came out with the win.”

A transfer from Archbishop Carroll (DC), the 6-foot-2, 175 pound Thomas has gotten noticeably more comfortable being Wise’s offensive focal point as the season has progressed.

“It’s been a smooth transition,” he said. “I thought it was going to be rough because of the setting and the atmosphere - it’s a lot of kids in the school - but the transition’s gone well and I’m just trying to win a state championship. … I’m playing my game a little bit more than I did last year. Just letting me showcase it - I think I’m, like, 9th or 8th in the DMV in scoring. I can score the ball and Coach Lou [Wilson] is allowing me to do that, and it’s exciting to play for a coach that’s allowing me to play my game.”

Wilson has coached his fair share of talented players throughout an illustrious career - he picked up career win No. 700 earlier this year - and he said Thomas has the chance to be a big-time player.

“He has excellent potential - the sky's the limit,” he said. “He knows he has to lock in a little bit more on the defensive end to be a two-way player that I want him to be and that he needs to be. … So we’re going to continue to work with him and try to get him up to speed on the defensive end and if he gets that part, then the sky’s the limit and he’s going to be a major college player.”

Wise forward Jalen Ruston scored on a putback with 3 seconds remaining to give the Pumas a last-second win over Surrattsville, continuing what has been a theme of tight finishes for the team this season.

“I just told them in the locker room that it was a great team win for us,” Wise coach Lou Wilson said, “and I also told them that we have to be the best $5 in Prince George’s County. We’ve had three overtime games and a couple of nail biters at the buzzer, so fans are getting their money’s worth when they come to see Wise play.”

In addition to edging Surrattsville, this season Wise has lost to Eleanor Roosevelt by two points in overtime and beaten Bowie twice by one point each time.

“I thought the key down the stretch was us getting some extra rebounds,” Wilson said. “Jalen Ruston did a very good job battling down in the trenches on the defensive boards and on the offensive boards - he had a nice putback there at the end which finished the game off for us. And our guard play; I challenged our guards there at halftime that they weren’t doing a very good job in the first half, and I told them that they had to play a lot better for us in the second half and they took that challenge.”

Bowie 2020 guard Taimon Jones hit a game-winning corner 3-pointer as time expired to lift the Bulldogs over host Fairmont Heights on Friday, 68-67. 2020 wing Justin Zavala came off the bench to score a team-high 22 points for Bowie. … Suitland 2023 guard Jalin Landis hit a running 3-pointer as time expired to force overtime in his team’s eventual win over Friendly.  … Maryland football commit Corey Dyches and fellow 2020 guard Duane Mason each had 32 points to lead Potomac (Md.) to an 83-80 win over Eleanor Roosevelt Friday night in one of the most anticipated games of the event. 2020 wing and Mount St. Mary’s commit Quinton Mincey led the Raiders with 17 points. … Bladensburg coach Antonio Williams earned his 100th career victory in his team’s 47-43 win over Gwynn Park. … Oxon Hill 2020 guard Malik Holland had a game-high 25 points in his team’s 72-39 win over Duval. … Douglass 2021 forward Abdou Samb  had 25 points and 13 rebounds to lead the Eagles over CH Flowers 73-58 in Saturday’s finale.