The Mustangs won their first WCAC crown since 2008. 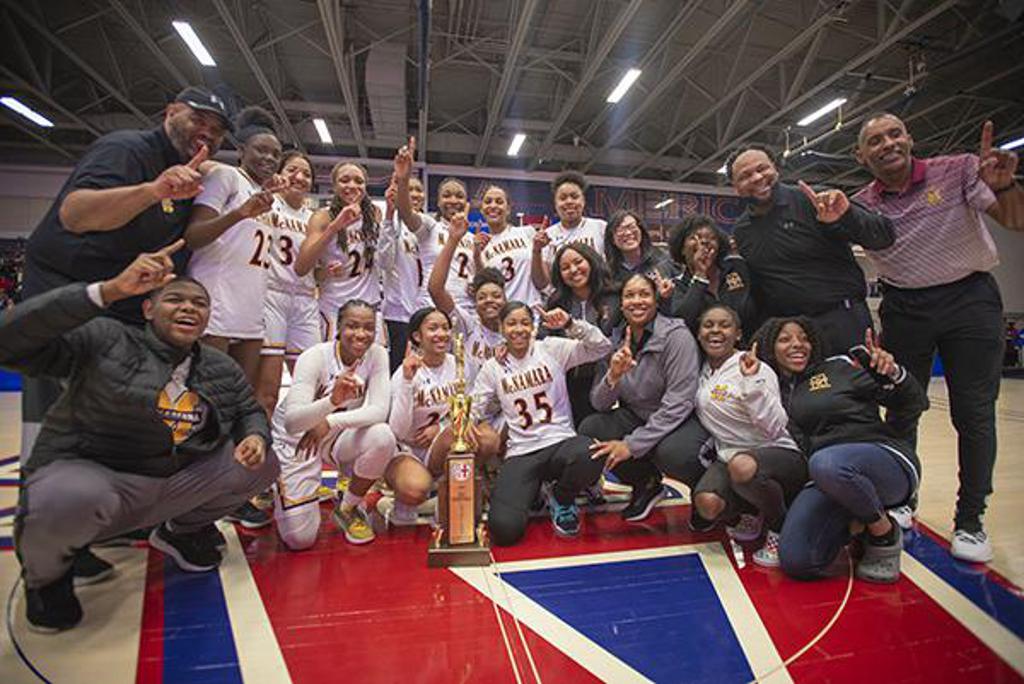 The Mustangs weathered a late Paul VI (Va.) run to edge the Panthers 43-40 to claim their first WCAC championship since 2008 on Monday night at American University’s Bender Arena.

“It’s a blessing, honestly,” McNamara 2020 wing Liatu King said. “The seniors, we’ve been wanting this since our freshman year and we fell short every year, but even though we fell short, we’ve been able to progress and get better every single year, and I just knew that this year was our year. Coming in, I felt really confident with my team. I felt like today was going to be a good day.”

Monday’s matchup featured the tourney’s top two seeds - McNamara No. 1 and PVI No. 2 - as well as the WCAC Co-Players of the Year in McNamara 2020 wing and McDonald’s All-American Madison Scott and Paul VI 2021 guard Lee Volker.

It was Scott’s team that got the better of this one, as the Mustangs’ defense proved to be the difference.

McNamara led 12-5 after one quarter and 20-16 at the break. Volker opened the third quarter with a pair of free throws to trim the deficit to two (20-18), but the Panthers wouldn't get any closer. McNamara closed the third with a scoring run to take a 32-23 lead into the final frame.

“They're a rhythm and timing team,” McNamara coach Frank Oliver said of PVI, “so we wanted to disrupt their rhythm and timing and make them put it on the floor. We wanted to pressure their triggers; they have a couple of kids that they look to to trigger plays, so we made sure that we pressured them. [PVI coach] Scott [Allen] does a great job with his team, so we knew we had to pressure them otherwise they were going to pick us apart.”

Paul VI cut the deficit to three points on a 3-pointer by Jaelyn Talley in the final seconds - the game was delayed for several minutes to sort out how much time (2.2 seconds) to put on the clock - but the Panthers didn’t get another opportunity as the Mustangs threw a long inbounds pass to seal the win. Talley led PVI with 14 points.

‘Every team goes on a run, it’s just what you do after that,” Scott said. “Again, they’re a great team so we knew it was coming and we had to just stay composed and know that this is our game. We worked too hard to leave empty-handed, and that’s what we did. We trusted each other, we trusted Coach Oliver, and we got the job done.”

After the obligatory championship game responsibilities - the trophy presentation, interviews and the All-WCAC Team photo -  King, Scott and Oliver finally joined their team for a raucous locker room celebration.