The Douglass (Md.) 2021 guard broke out this past season. 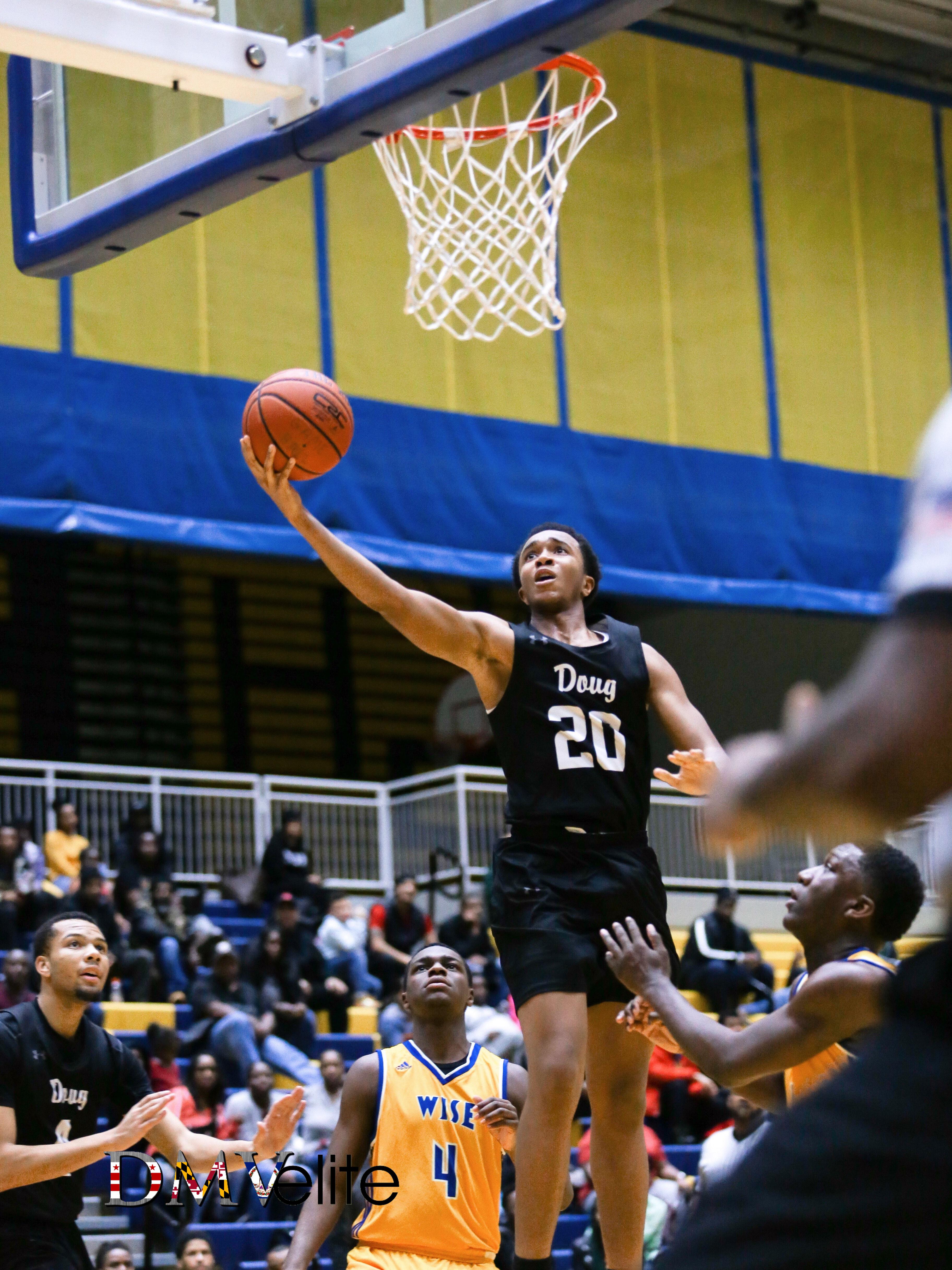 After two up-and-down varsity seasons, Frederick Douglass-PG (Md.) 2021 guard Mike Woods finally started putting it all together as a junior.

The 6-foot-5, 180-pounder posted 12.2 points per game - nearly quadrupling his 3.6 ppg average from the year before. He had a career-high 30 points in a January win at Wise, and went for 25 in the Eagles’ overtime 2A state quarterfinal win over Thomas Stone in March.

Douglass was slated to face Wicomico in the state semifinals at the University of Maryland the following week, but the playoffs were postponed indefinitely on the eve of the contest due to coronavirus concerns, and ultimately cancelled in May.

Woods - who plays his travel ball with Team Takeover Orange 17U - was strong off the court as well, posting a 3.9 GPA and an 1140 SAT score. Princeton and Army West Point are among the Division I programs showing interest, and he has a pair of Division II offers from Bowie State and Livingstone (NC).

I recently caught up with Woods to discuss his game, breakout season, working out through quarantine, his off court interests and more:

HOW HAVE YOU BEEN STAYING IN SHAPE?

“I’ve been doing a lot of running. I run, like, three miles a day and I’ve been doing that since the beginning of quarantine. I do weight lifting every other day - legs one day, arms the next day - and I’ve been training a lot with Keith Williams and on my own. I’m just really trying to improve my body for the next level to get my speed and my strength up for the next level of competition.”

DO YOU THINK NOT PLAYING GAMES IS A NEGATIVE?

“I think it’s a big negative. Nothing can really replace, like, live ball action. I mean, doing drills does help with your technique and your fundamentals, but missing out on AAU from the whole playing standpoint is really bad, because you just can’t replace competition with somebody else in a game setting.”

“This was my first full healthy season. My freshman and sophomore years were kind of a struggle because I was in and out of the lineups. But this year I felt like I had my ups and downs but I felt like it was really successful. Towards the end of the season I really caught my groove with scoring and was leading the team and playing a lot of positions and doing a lot of things for my team like rebounding and assisting. I felt like when they took the Maryland states away from us because of corona that really hurt because we were playing well. I feel like we really had a good shot at winning everything for 2A. But I feel like the season ended well, and I wanted to go off on a string point to prepare for the AAU season that I planned to have.”

WHAT WAS IT LIKE WAITING TO SEE IF YOU COULD PLAY?

“We were having meetings as a team throughout the whole beginning of quarantine and our coach was telling us, ‘Just stay ready, ’cause we really don’t know.’ As a team we were pretty much hoping that we would have it somehow or some way, but when they came out with the news that it was cancelled, it was devastating but it was the best option. We could understand, but we were still pretty hurt.”

HOW DID YOU FINISH THE SCHOOL YEAR?

“We just had online classes for the rest of the year. It was kind of hard at first because we had to get the whole technology thing down and our teachers had to plan schedules around other teachers so we wouldn't have intersecting class times. But after a while we got it under control. So, for not having [physical] school, it was pretty productive.”

WHAT ARE YOUR THOUGHTS ON THE TRAVEL SEASON?

I’m really focusing on improving myself right now, but I’ve been talking to our coach and he’s been telling us that they're trying to plan the live periods for August, September, October, so i’m really just trying to make sure that I’m ready for that time. If it comes I want to be ready, and if it's not I’m just going to prepare for my next high school season. So that’s pretty much my plan right now.”

“I really want somewhere where I can grow for four years - I want to be there for four years. I really want to have my academics straight for those four years; I want to be able to improve my brain just like my body on the court. I want to go somewhere that I can also build up my athletic strengths and they are looking for me to improve and they have high expectations for me. I would like to stay on the East Coast - kind of close to home, that would be my preference. I know I want to major in Finance. Exactly what, I’m not a hundred percent sure, but in that department.”

“Nah, it’s always been basketball. Of course when we were younger you kind of made your friends off the whole sports teams and everything, but after a while I just realized that maybe I could take it somewhere. I’m happy with where I am now, but I’m still looking to improve.”

HOW DID YOU START PLAYING?

“Probably with my older brother [Mark]. He played when we were younger and he used to always beat me up off the court so I wanted to get good enough to beat him.”

WHAT IS YOUR FAVORITE BASKETBALL MEMORY?

“Probably the most recent one - our game against Thomas Stone. That was a really, really tough game, and we had to have a lot of things come together at that moment to win, and we still only escaped by one point. But it was just so exciting because that was the game we had to win to get back to Maryland to redeem ourselves. So that’s probably my favorite moment right now.”

“I read a lot of books and I play my instrument - I play the saxophone. I explore a lot of wildlife; in our backyard we have woods and a little creek, so I’m back there a lot, too.”

HOW LONG HAVE YOU BEEN PLAYING MUSIC?

“I’ve been playing the saxophone for seven years now. I play in my school band - a couple of bands, actually. My school band and a jazz band.”

HOW IS IT WORKING OUT WITH KEITH WILLIAMS?

“I’ve been working out with him for about two months now, and I feel like that’s really helping my game. You know the names like Markelle [Fultz] and DeMarcus Cousins, but him and my Dad have a personal relationship, so he just felt like it was time for me to start going to him to get my game ready for that next level.”