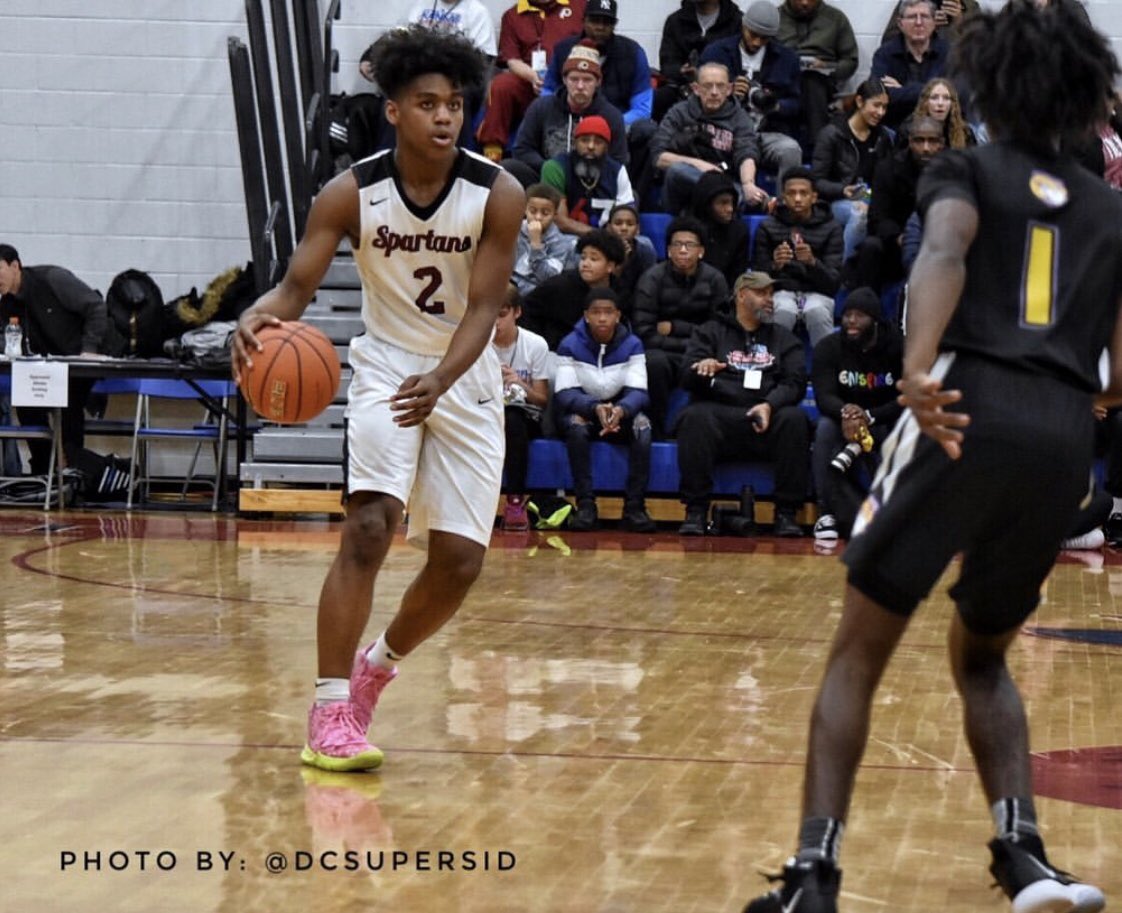 Bishop Walsh (Md.) 2021 Guard Jalen Miller had a stellar junior campaign, averaging 15 points, 10.5 assists and 5.5 rebounds per game for the Spartans before the season came to an abrupt close in March.

Since then, he’s stayed busy working on his game while preparing for his final high school season, and he recently brought his recruitment to a close by committing to Rutgers University last week.

I recently caught up with the 6-foot-3, 190-pound Miller to discuss his commitment, his game, working out through quarantine, his off court interests and more:

WHAT MADE YOU DECIDE RUTGERS WAS THE PICK?

“I’ve built a good relationship with Coach [Steve] Pikiell, my family, and I also believe I can achieve both academically and on the court there.”

HOW HAVE YOU KEPT A NORMAL ROUTINE DURING QUARANTINE?

“It’s hard to really say anything’s normal right now, especially for my class of 2021 going into our senior year. You have the second part of your junior year getting cut off, and it doesn’t even feel like I’m a senior right now, but its reality. I think that me and my family have worked to the best of our ability to find a normal routine and just hang out. I know that one of the key things through this quarantine that I’ve been working on is my athleticism, changing my body and just working on all the weaknesses of my game while also working on the strengths to stay in shape. I think that with AAU for the most part being cancelled, it’s definitely given me a lot of time to rest my body and at the same time work on all parts of the game that I don’t usually have as much time to work on because we’ve usually be playing games and everything.”

“I’d look more towards, like, my craftiness off the dribble. I’ve been working on that a lot, and really extending range. I think for this past year - especially for the high school season - I definitely showed that I can shoot the ball well from 3, but the college level [distance] is even further so I’ve been working on that some more. I continue to work on different finishing moves and my mid-range, because I think what really separates people at the next level is that mid-range game. You aren’t always going to shoot the 3 and you aren’t always going to get straight to the cup every time, so I think that always having that third option on that level is going to separate me from other players.”

WHAT WAS IT LIKE STARTING ON VARSITY AS A FRESHMAN?
[Miller began his career at St. James (Md.) before transferring to BW.]

“I think it's helped shape who I am today and what kind of player I am today. I was definitely never promised anything; the first day I went into St. James as an 8th Grader I wanted to play up on varsity right away, but obviously I would have lost a year of eligibility. But as a 9th Grader, Coach [Dan] Prete sat me and the other freshmen down in his office and said to us, ‘Look, you might have to start on JV first, but if I feel like you can produce on the varsity level, then you definitely will be playing.’ I just worked hard for that, and I think the main thing that helped me is that I went in right away and I didn’t shy away or change how I am because I was a freshman. I’ve always been a leader -  that’s just by nature in everything I do. So me being the youngest on the floor didn’t change nothing for me. Age doesn’t matter to me on the floor - if you can hoop, you can hoop.”

DID YOU FEEL COMFORTABLE WITH THE PHYSICALITY IMMEDIATELY?

“I would say I definitely got better with it, but I’ve always been comfortable with it. I’ve always been aggressive no matter what. One thing I will say is that I’ve been way more comfortable recently in high school with finding my shots and my spots on the floor, but even as a freshman I always played hard, because there’s no point in playing if you aren’t going to give it your all every time you're on the floor. You could be playing against the No. 1-ranked point guard in the country like Cole Anthony or playing a public school - you’ve got to give it your all because you never know who’s watching.”

“It started off a little slow for us, but we were still winning. I think if we had really become a family on the court as much as we were off the court early, we would have had a lot more success. We were still winning, but I think that we let some teams hang in with us early that, like, just had no business hanging in with us, and that’s just the truth. We were talented enough to do great and win the Alhambra this year, but unfortunately that got cancelled. By that time of the year we had our chemistry right and we all knew our roles and what we had to do to beat teams  like DeMatha or a PVI in that tournament. I think that we were more than capable of doing that, it was just whether or not we were going to do what it takes to do that.”

HOW DID YOU ADAPT YOUR TRAINING UNDER QUARANTINE?

“I just had access to an outdoor court. I could definitely go out there and work, but I was limited to that access because everything was just really bad at that time when it all first started breaking out and everything. Me and my family just wanted to stay safe, so we were just going to make the smart decision. Everything’s not about what’s happening on the court, but nothing seems as impactful as corona until it hits somebody close in your family, and we’re not trying to have that happen. So we definitely have way more access to gyms now, but at that time I just went into my basement and worked on my body every day, because that definitely will give me a different impact on the floor and this was the perfect time to work on it - you don’t have nothing else to do but work. Make yourself better where you can, even if you can’t pick up a basketball.”

HAVE YOU NOTICED ANY IMPROVEMENT PHYSICALLY?

“I think my vertical has increased a lot. I joke with the people that I work out with in Virginia with Duval Simmonds, they were like, ‘Man, two weeks ago you were not consistently dunking, and now you're doing backscratchers.’ That just shows that if you work hard and you put your mind to something, you’re going to get results.”

YOU’VE ATTENDED BOARDING SCHOOLS; IS THIS THE LONGEST YOU’VE BEEN HOME IN A WHILE?

“It’s been nice. With everything my family does for me it’s good to really spend time with them, even though we’re stuck in the house all the time. But just being with your family, that’s all that matters.”

WHAT IS IT LIKE HAVING SO MUCH UNCERTAINTY AROUND YOUR SENIOR YEAR?

“Senior year, you definitely would want to know everything like your schedule and all that. Some of the public schools have already cancelled their seasons, which is very unfortunate - especially for the seniors - but I think that at the end of the day I’m just going to be thankful that I wake up every morning, you know? That God decided to allow me and my family to wake up every morning, and I just think that there’s always a bigger picture than basketball. I love basketball with all my heart, but there’s always a bigger picture in everything that you do.”

“I would probably say - if everything was quote/unquote ‘normal’ at this time, I’d be spending time with my family and friends. I never take for granted what people have done for me and how people have pushed me - like, I would say my best friends in this world, they know who they are, and my family knows how much I appreciate them. I just want to always be with them, be around them and have fun with them. Me and my family usually always go to the movies - we don’t have access to that right now - but that was our little activity together. I’ll also usually have a few of my friends over and we’ll kick it and play video games and chill and catch up.”

“I was always a football player, really. Football is my first love and always will be. A lot of coaches tell me that’s where my game translates as a tough point guard, because I was a running back and I was contact-first in everything that I did. If I’m in a position to get a touchdown and I’m 20 yards in front of my defender, I’m going to slow down just so I can get that extra stiff arm in. I’ve just always loved being a physical player in everything I do; even when I did cross country at St. James, we were at the finish line and I cut off this person and almost got disqualified.”

“It was definitely new for me; I’d never done anything like that. I think that what really helped me and changed my mindset with every sport that I’ve done is my Dad [Kendall Miller] tells me ‘No matter what - if you're good or not, you’re a natural athlete, and if you try your hardest you’ll be good.’ I think that I went from literally one of the last people on the JV cross country team to over the course of the year I became the second-best runner in times. I reached a goal that I didn’t even now that I wanted - to get a good time in cross country. I was so proud of myself and I thank my Dad for that, because he always pushes me and changes my perspective to strive for a different level of competitiveness in everything I do.”

“Probably my favorite game to play in was against Oak Hill when they had Cole Anthony, Kofi Cockburn, Cam Thomas - I think that those are the games that I enjoy most. The energy of the crowd was solely put against us and hyping up a team like Oak Hill, and we played well in that environment and we shocked the crowd and slowly won them over to our side throughout the course of the game. They didn’t expect us to compete with them, and I think that’s where I saw our team the most emotional in the locker room. It was great to see that I had teammates that shared that same emotion and were disappointed in losing. Some teams would go up against a team like Oak Hill and just be like, ‘Oh, we only lost by four? Shoot, we only lost by four to the No. 1 team in the country!’ Nah, we thought that we should have won by 15. We were disappointed but after that we went on a winning streak and we did some great things.”