A look at some of the top performers from Weeks 3&4. 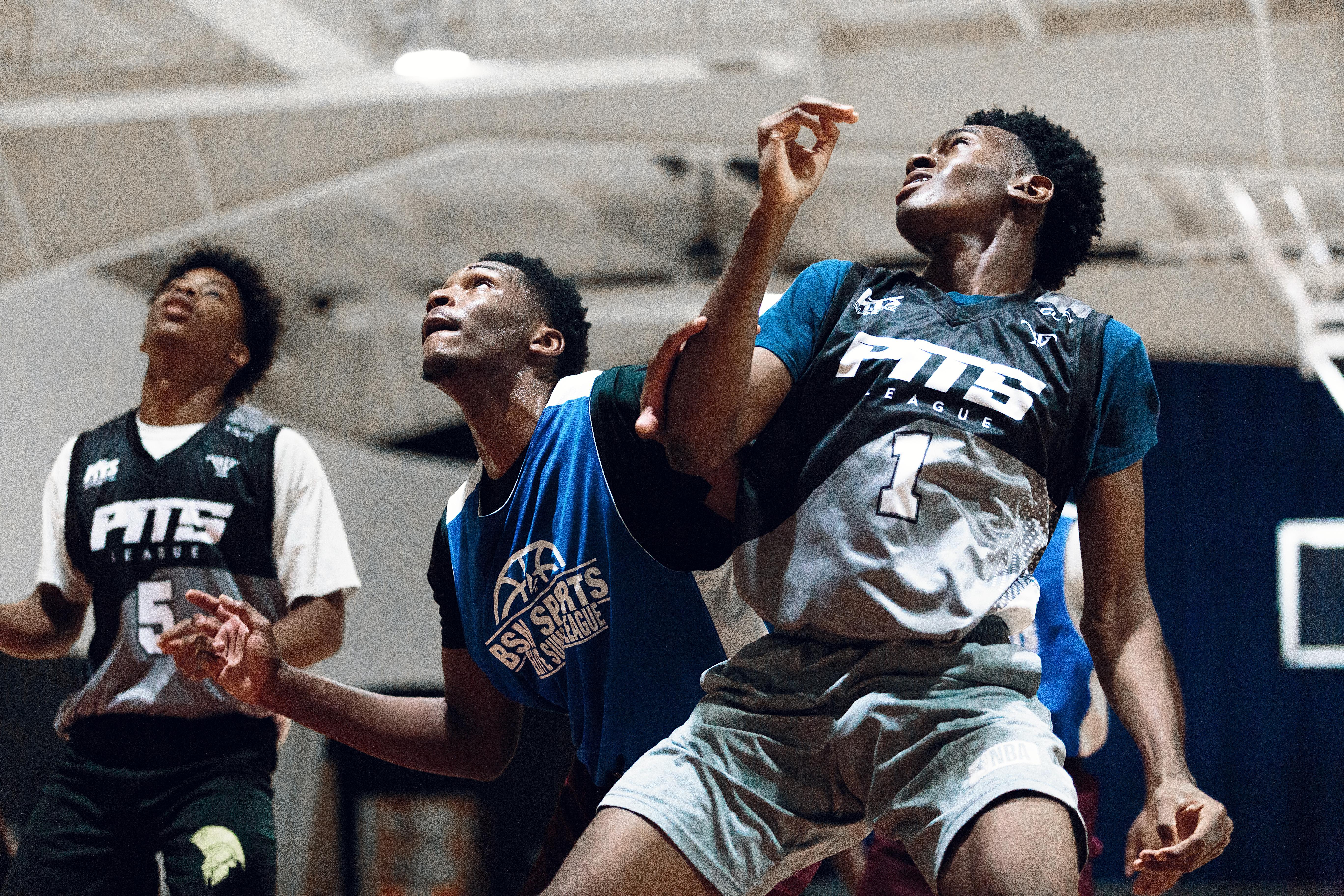 LANHAM, MD - Here’s a look at a few of the standouts from DMVelite Fall Finale Showcase  League action October 23-31 at Trinity Assembly:

DAVID BROWN, MUSTANGS
The Loyola (Md.) commit scored a game-high 23 points to lead the Mustangs to a 49-42 victory over a tough DC Evolution squad on October 24. 15 of those came in the first half to stake his team to an early lead, and they held off a second-half rally. On October 31 he led the Mustangs with 19 points in a 57-37 victory over Lanham Christian.

“If there’s a season this year, [the goal is] to try to win a championship,” Brown said. “The WCAC is definitely a competitive conference, so you just want to get out there and play our best and get a championship. And then just get ready for that Division I level and playing against the guys that are bigger and stronger than me.”

The 6-foot-5, 205-pound Brown said he’s been able to keep his progression on track despite the shakeup of the travel ball and high school calendars.

“It’s kind of stressful,” he said. “Staying home all day and just working out and doing school work and being virtual, it's kind of a struggle but you need to stay focused and have that preparation to be read when we go back out on the court.”

TERRENCE BUTLER, MUSTANGS
Another Division I-bound senior for Bishop McNamara (Md.), the Drexel commit was a two-way factor in a pair of Mustang victories.

“My goal for this year is to basically prepare for college,” he said. “Guys are going to be stronger, faster, so you just have to pay more attention to the game and really learn to work with the chemistry of the team.”

The 6-foot-7, 230 pounder said it was a relief to have his college recruitment wrapped up.

ALFRED WORRELL, DC LIONS
A transfer from Blair (Md.), Worrell fit in extremely well alongside his new Archbishop Carroll teammates, posting a team-high 18 points in a 63-42 win over Cecil Kirk 2021 on October 24.

“I wanted to play against better competition,” he said of the move. “I came from a Montgomery County school, so I wanted to take the next step to get to my best level and just try to go to the Division I level.”

The 6-foot-4, 205 pound Worrell shoots well from the perimeter, and also showed the ability to create off the dribble. He said playing in the Fall Finale was key to helping him further develop chemistry with his new squad.

“I just want to build a strong bond with my teammates and get ready for the season,” he said. “I want to get a feel for how they play and let them see how I play.”

MYLES MCDUFFIE, CECIL KIRK 2022
McDuffie had 16 of his game-high 20 points in the first half to stake Ceci Kirk to an early lead en route to a big 64-18 win over Frederick Force on October 24.

A confident and athletic scorer, the 6-foot, 165 pounder spent his freshman year at Reservoir before transferring to River Hill, where he helped lead the JV team to a strong campaign.

Now he has his sights set on a big varsity season, in spite of all the uncertainty.

“Hopefully if we have a season, I’m trying to make it to states, obviously,” he said. “And get offers. It’s hard because we work hard and train and everything, and then it may come out to not having a season at all. So it’s hard. But I’m a junior so I’ve still got two years, so if this year doesn’t work out I’ve still got next year.”

JORDAN HAWKINS, DMV STAGS 17U
Hawkins posted 23 points in a 55-53 win over The Family on October 30. The UConn commit makes the game look easy; he plays with great pace and continues to show an improved handle. He should be in the running for WCAC Player of the Year.

JAKE KOVERMAN, DMV STAGS 17U
Koverman has gotten stronger by the game since returning from last year’s knee injury, and posted 15 points in a 55-53 win over The Family. The High Point University commit has always been a plus shooter, but is now handling the rock better and is getting to the rim in the half court.

BEN WILLIAMS, THE FAMILY
Williams notched team highs in points (15) and assists (6) as the Family dropped a close one to DMV Stags, 55-53. The St. Mary’s Ryken (Md.) 2021 is a smart lead guard who keeps his poise and makes good decisions. Also an underrated defender.

DARREN BUCHANAN, DC EVOLUTION
Buchanan had a team-high 12 points and nearly led his squad back from a double-digit deficit in a 49-42 loss to Mustangs. He’s a matchup nightmare with his size and quickness on the perimeter, and is tough to stop once he gets going to the rim. His impressive athleticism was evident on the offensive boards, where was often off the floor and attacking before the defense had even gathered to jump.

RYAN ARCHEY, YELLOW JACKETS
The 6-foot-1 combo guard continued his stellar play this fall with 15 points in a 46-42 win over Brothers United on October 30. He scores it from three levels and has been one of the breakout players of the fall.

TY BEVINS, YELLOW JACKETS
An athletic 6-foot-5 wing guard who can shoot it with his feet set. He ss dangerous in transition as a finisher and plays the passing lanes well on the defensive end.

AARON NEWLON, LANHAM CHRISTIAN
Newlon came through with one of the Fall Finale’s biggest clutch moments, hitting a buzzer-beating corner 3-pointer  to give Lanham Christian (Md.) a 43-42 in over Maryland Movement 17U on October 24.

ADAM FOX, 6TH MAN WARRIORS
Fox has scored it consistently over the last few weeks. The Dematha (Md.) transfer led 6th Man with 22 points on an efficient nine shots in a 53-29 win over DC Premier on October 24.

PATRICK MCDONOUGH, DC PREMIER
A heady floor general with an advanced IQ, McDonough was in complete control of his team. The young maestro was a pleasure to watch.

MACHI COLE, CECIL KIRK 2024
Cole led Cecil Kirk with 15 points and 7 rebounds in a 39-36 win over We R1 on October 24. The Mt. Carmel (Md.) guard is aggressive attacking the basket and is a capable shooter.

DJ DANTZLER, CECIL KIRK 2024
The lighting quick guard showcased excellent vision and made a number of nice assists in his team’s victory over We R1. He plays smart and is very elusive off the dribble.

RACHI LUM, WE R1 2024
Lum was the best player on the court in the morning session for a talented We R1 team. He was lights out shooting from the perimeter and had a team-high 16 points in a 39-36 loss to Cecil Kirk 2024.

ELIJAH PROCTOR, WE R1 2024
The Delaware native is long and athletic with great footwork and a nice touch in the paint. Already 6-foot-5, he is brimming with raw talent and is definitely a prospect to track going forward.

JACOB WALLACE, WE R1 2025
Wallace is a really solid floor general that is a natural on ball defender. Gets in the paint at will and creates for his teammates.

SILAS DEVONISH, WE R1 2025
Devonish is an aggressive scoring point guard who is very confident in his ability. He will need to continue to improve as a distributor, but is wired to score and had a team-high 12 points in a 47-32 loss to Team Durant on October 30.

DEREK DICKSON, TEAM DURANT
Dickson is a steady point guard who plays within himself and scores at will. Natural leader who has impressive poise.

CAM FLEMMING, TEAM DURANT
An athletic forward that is still raw offensively but projects as a wing. Impressive natural ability that will translate at the next level.

JAYLEN ROUGIER, TEAM DURANT
Rougier is a talented combo forward who showed the ability to score in the paint, and he was also aggressive on the glass.

RASHAD SAMUELS, TRAILBLAZERS ELITE
If there is a gem in the DMV 2023 class that has yet to be uncovered, it may be Rashad Samuels, who had 19 points and hit four 3-pointers in a win over Cecil Kirk 2023. At 6-foot-1 he is more shooting guard than point guard, but he possesses a slick handle along with a silky smooth jumper.

REECE SAMUELS, TRAILBLAZERS ELITE
The other half of a talented sibling pairing, Reece Samuels is a point guard that rarely turns the ball over and shoots it from deep. Young for his age group, Reece has an understanding of how to balance running a team and scoring when needed.