A look at Session II's top performers in the 15U division. 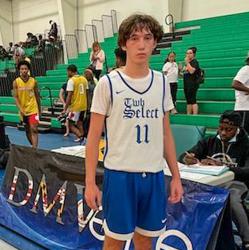 HAMPTON, VA - Session II of the 2021 DMVelite Super Circuit took place last weekend at the storied Boo Williams SportsPlex, and featured another display of under the radar talent.

Here’s a look at some of the standouts from the 15U Division:

McCavanagh (Clover Hill 2024 Guard) was strong on the offensive end all weekend for TWB, averaging a team-leading 15.3 points per game. He made perhaps his biggest play on the defensive end though, deflecting an inbounds pass and collecting the loose ball to score at the buzzer in a 46-44 win over Maryland Movement on Sunday.

After going 0-3 in Super Circuit Session I in Richmond, Team Dedication turned it around with a perfect 3-0 mark in Hampton and Lyons (Hammond 2024) was a key reason why. He opened with 19 points and hit four 3-pointers in an opening victory over TWB Select, and later had 14 in a 49-44 win over Washington Highland.

Martin posted a team-high 17 points in his team’s 49-47 win over Maryland Movement. He averaged 13.5 points and 5 rebounds per game.

The 2024 guard from Eastern View (Va.) High School averaged 11.3 points per game to lead VES to a 2-1 mark in their Super Circuit debut.

Cofield impressed with his scoring ability and vision as he helped Team MD 23 stay unbeaten through two Super Circuit Sessions.

Corkeron (Wilde Lake) is an impressive athlete and has good range on his shot. He impressed in a 50-41 win over Virginia Supreme Elite on Saturday.