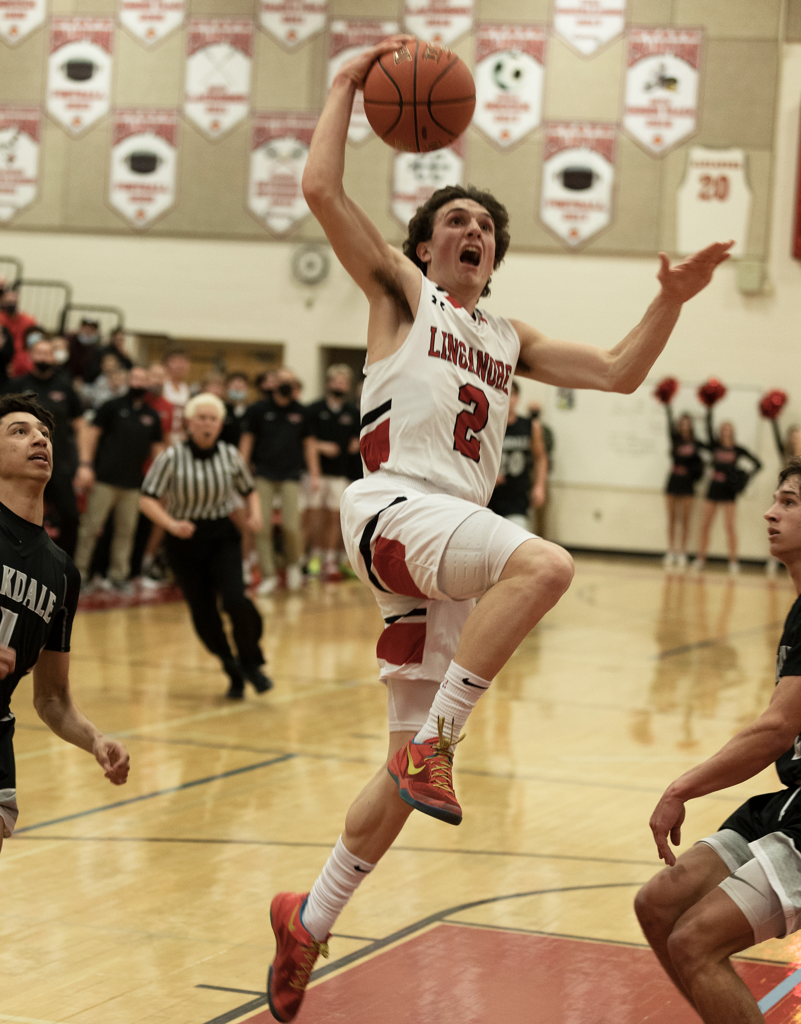 Lancers claw back against rivals for second time this season.

FREDERICK, MD – As Linganore trudged on with four points in the third quarter Tuesday night, 2022 guard Alex Hawkins drilled a jumper at the shot-clock buzzer that gave Oakdale its largest lead of the game at 12 points.

Lancers coach Tim Abercrombie, all the while, awaited his team’s climactic moment.

“Down 10, 11, 12 that’s fine. When we get hot, it circulates down to everybody,” Abercrombie said later outside the Linganore High School gymnasium hall, a calmer place than the loud, playoff-like arena.

Linganore ended the third quarter on an eight-point run – all on urgent jumpers – that ignited another thrilling comeback versus crosstown rival Oakdale, 48-43.

On December 17, Linganore (10-1) erased a 17-point deficit in the fourth quarter for a 71-61 overtime win over the Bears (9-4) – a 2020 Maryland Class 2A Final Four team that on Tuesday played at full strength for the first time all season.

The rematch wasn’t as pretty, but Linganore was again driven by its shot-making identity in the most heated and needed possessions. All told, Linganore made seven 3-pointers compared to Oakdale’s two.

“The 3-point shot is such a good equalizer with our team,” Abercrombie said. “We never feel like we’re out of the game.”

2022 guard Timmy Conner, Frederick County’s leading scorer at 24.7 points per game, scored 12 of his 15 points in the fourth quarter. In the previous comeback, he scored 19 of his team’s 27 fourth-quarter points.

Conner’s biggest shot Tuesday happened with 1:34 remaining in regulation: a contested 3-pointer four feet behind the arc that put Linganore ahead 44-38.

His only prior 3-ball was Linganore’s first bucket of the game – a shot that stopped Oakdale’s opening 11-0 run nearly five minutes into action.

Oakdale led 23-17 at the half, getting 14 of those points on second-chance or fast-break looks.

Hawkins, an athletic 6-foot-2 guard, accounted for nine first-half points. Only four came in the second, though, and Abercrombie thinks fatigue played a hand since Hawkins was assigned to chase Conner most of the game.

Lang started the key 8-0 run in the third on a wide-open 3-pointer from the corner, while Porter continued the trend on the next possession with a triple at the top of the key.

Porter then hit another jumper before the third quarter buzzer.

“They did a great job stepping up and making plays while [Conner] was getting face-guarded,” Abercrombie said.

Conner scored his team’s first three points of the final quarter, and Linganore soon led for the first time 37-36 with four minutes remaining.

2022 guard Cameron Dorner (12 points) put Oakdale back in front 38-37 on the next possession with a tough layup, but Linganore scored the next seven points for the 44-38 lead, ultimately punctuated by Conner’s gym-rocking 3-pointer from NBA range.

“Defense, and Andrew’s rebounding and defense, was awesome,” Abercrombie said. “That was the difference-maker.”

Oakdale coach Brandon Long believes Tuesday's game is the program’s second loss in school history when holding a team to less than 50 points. His Bears couldn’t score when they had to, as 2022 guard Cainan Schmidt made his teams two 3-pointers.

Long isn’t racking his brain too much and can take consolation in coaching a healthy team for the first time all season.

“Really, the message is, stay the course,” Long said. “I thought both teams battled. That was a great high school game.

“We couldn’t score for a long stretch there in the second half, and they did. They got to the line. I think Timmy made six or seven free throws in the fourth quarter. They deserved to win. They played their butts off. Hats off to them. They are a well-coached team, very similar to us. They played good defense. Unfortunately, they scored a couple more than we did.”