Thompson Hitting His Stride At Towson 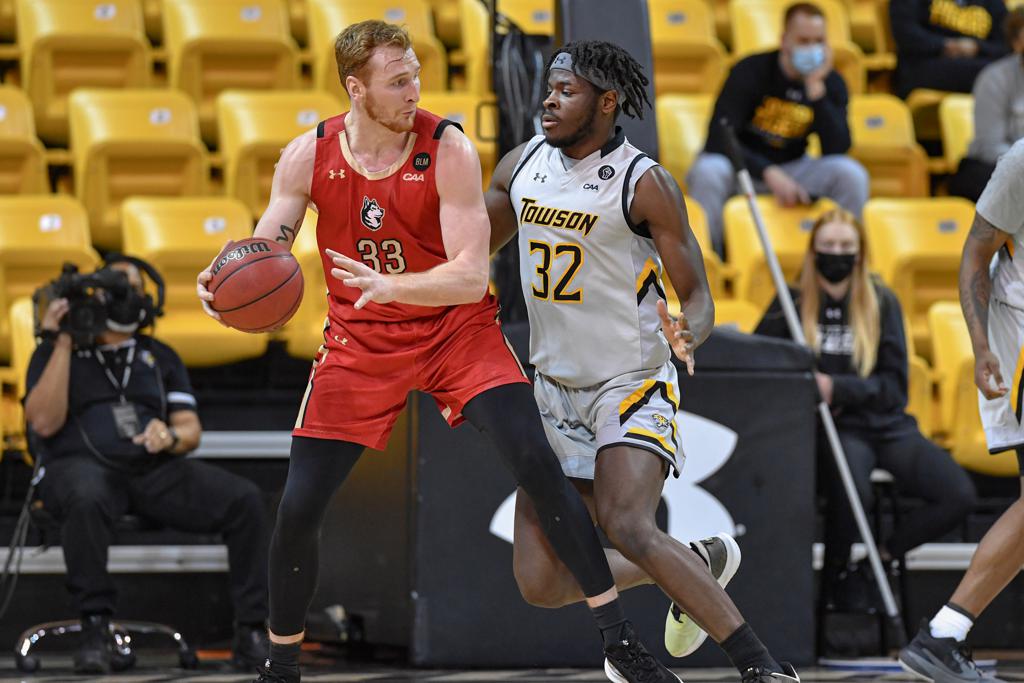 Charles Thompson defends in a game this season. [ENP Photography]

In early December, Towson post player Charles Thompson was held to just two points on one-of-three shooting from the field with four fouls in 27 minutes against powerhouse Ohio State.

One of his inside foes that day, Zed Key of the Buckeyes, also played 27 minutes but produced 13 points with nine rebounds as host Ohio State won by 11.

“It was more than just a loss. It was a valuable lesson,” the 6-foot-7 Thompson told DMVelite.com in a phone interview after practice Monday. “He got the better of me.”

Towson coach Pat Skerry told a Baltimore radio station in the fall that Thompson “has made a big step in his game.”

The Ohio State contest came soon after that – and then came a more motivated Thompson.

Thompson - a product of St. Stephens & St. Agnes School (Va.) and the 2019 DMVelite Northern Virginia Player Of The Year - has improved steadily on offense since that game against the Buckeyes. He scored at least 10 points in four straight games in a stretch through early January.

Now he is on another streak, with 50 points in the past three games. He scored 23 points on Saturday in a win at home Saturday over Drexel and on Monday was named the Colonial Athletic Association Player of the Week.

"He is using the jump hook a lot more," Skerry said. "He told me the other day the game is slowing down for him. ... Charles plays as hard as anyone. He is a great teammate."

Thompson went an impressive 18-of-24 from the field in two Towson victories last week to earn the award, averaging 19 points and 10 rebounds per game. He said he  got the news from Towson assistant Pat O’Connell, a former standout at nearby Division III Johns Hopkins.

Thompson said another aid to his game is watching teammate Cam Holden, who leads the team at 14.4 points per contest.

“I have been going off what he has been doing,” Thompson said.

Overall, Thompson is averaging 9.0 points and 6.1 boards per contest in 22 games - all starts - for Towson going into Thursday’s game at Hofstra in Colonial Athletic Association play.

“I have been more patient with post up moves. I am making the most of my touches,” he said. “We share the ball with a lot of ball movement and I want to make sure I make the most of it.”

The Tigers are 16-6 overall and second in the CAA at 7-2, just behind first-place North Carolina Wilmington (8-0).

“Hofstra has an amazing offensive system,” Thompson said. “We have to close out the shooters; that will be very key for us.”

Thompson almost didn’t play basketball in college. The Fort Washington, MD native originally planned to play football, and got an offer from Howard and some interest from Maryland.

“I didn’t make any official visits [for basketball]," he said.

But since he was around hoops so much in  high school, including time with Team Takeover, he decided to focus on basketball.

“I was just starting to fall in love with basketball,” he said.

Thompson averaged 3.2 points and 3.7 rebounds as a freshman for Towson and 9.4 points and 6.4 boards per contest last season as a sophomore.

He was second in the CAA in blocks at 1.6 per contest and he gained a spot on the CAA All-Defensive Team.

“It was a better situation for me,” he said of the high school in Alexandria.

Thompson is studying sports management and wants to play basketball as long as he can.

“Eventually when that stops, I want to be a coach or athletic director,” he said.

“The job is not finished,” Thompson said of the CAA race. “We know we can play like this. We have a common goal. We are older guys and know what it takes. We are just looking forward to the next game. We play each game like it is the Super Bowl.”

There have been a few challenges.

The Towson home game on Thursday against Delaware was suspended in the second half due to a wet floor.

Thompson said he didn’t have any trouble with his footing that game – and the floor was fine when the Tigers won at home Saturday.

“I am not really sure what happened with the floor,” Thompson said. “It was really crazy when we played Delaware; everybody was slipping and falling. We played two days later and it was fine.”

The CAA tournament is slated for the Entertainment & Sports Arena in southeast Washington from March 2-5. Thompson played there for the first time in 2020 when the event was held in Washington, just before the pandemic shut down college and pro sports across the country.

“I can’t wait,” he said of the upcoming tourney.

Editor’s note:  David Driver has been covering college basketball in the DMV for 25 years. His book “Hoops Dreams In Europe: American Basketball Players Building Careers Overseas” is slated to be out by March. He can be reached at www.daytondavid.com and @DaytonVaDriver