The Cougars pulled away behind a strong performance from 2022 forward Jacory Wilkes. 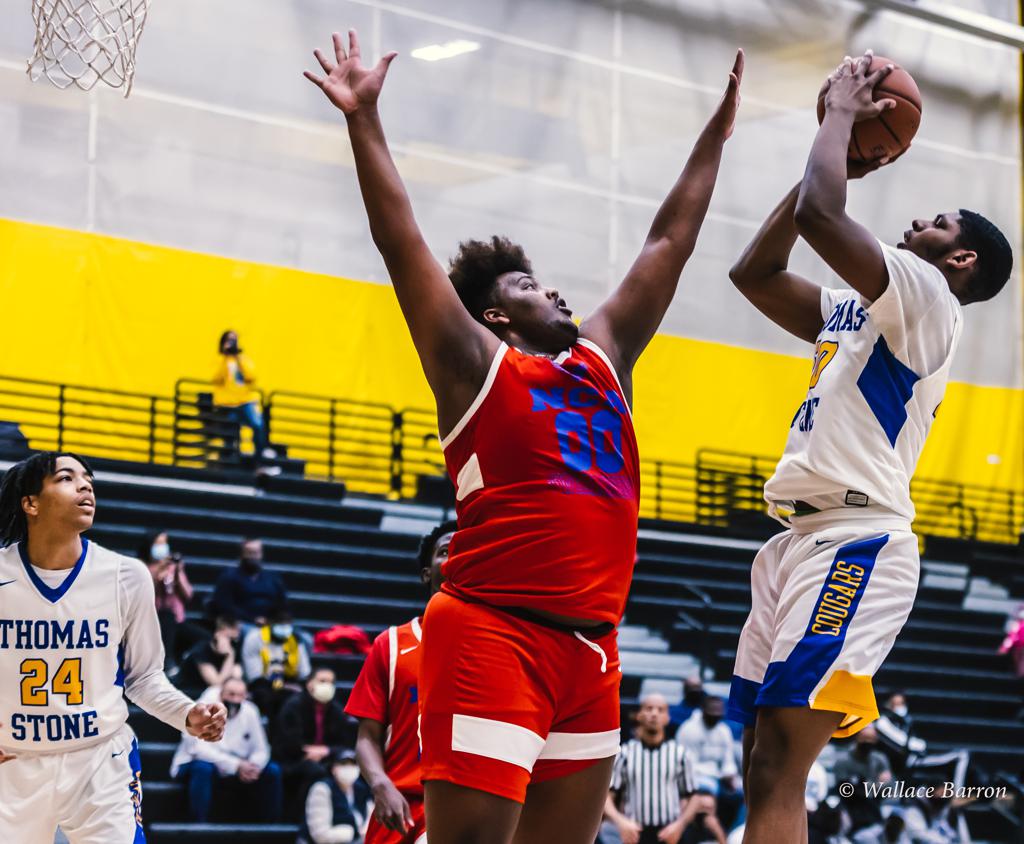 WHAT HAPPENED: Powered by 2022 forward Jacory Wilkes, Thomas Stone pulled away in the second half for a 69-55 victory over National Christian Academy White in the opening game of the DMV Winter Classic on Saturday at North Point High School in Waldorf, Md.

NCA made a run behind 2023 forward Solomon Hillman, whittling the deficit down to five on two occasions, but never could fully close the gap.

“We challenged the guys at halftime to play a little harder,” Stone coach Dale Lamberth said. “We had a tough game with a very good North Point team [Friday] night, so our challenge was playing in a noon game, to come out and play really hard, and continue what you were doing the night before. Obviously, time got ‘em, and so they were slow getting out the gate the first half. … I think as time went on in that second half, they kind of picked it up a little bit.”

National Christian 2022 guard Amarre Fridie had a team-high 20 points for the Eagles, showcasing a nice outside touch.

The 6-foot-6, 230-pound Wilkes posted a game-high 27 points and 12 rebounds, and was especially dominant in the second half to help the Cougars pull away.

“Having a young team, and being a veteran senior I had to come back and lead by example,” Wilkes said. “I’m getting used to it. I’ve never been in this position where I had to lead a team or where everybody looked at me as one of the most experienced on the team.”

Part of that leadership is leading the way conditioning-wise, as well, and its role that Lamberth said Wilkes has embraced after falling out of shape during the team’s pandemic layoff.

“I think he also pushed himself when he got tired, to get that second wind,” Lamberth said. “I think in the beginning of the year he was like, ‘I’m tired,’ and he’d give in. Over time - and in practice I did a better job at conditioning, because I was so focused on, ‘Hey, this is what the system is that you’re in,’ and not really looking at ‘OK, I’ve got to do more conditioning as well.’ And that helped him for sure. But I think he pushed himself to get to that next stage, where out of 32 minutes, he can play 27.”

Blessed with good touch and footwork in the paint, Wilkes is also strong and explosive at the rim. He said he’s heard from several Division II programs, but isn’t preoccupied with his recruitment right now.

“I’m just worried about the season right now,” he said. “Some schools are looking at me, but I’m just focused on my last season and trying to finish it out with a state championship.”

Thomas Stone has nine upperclassmen on its roster, but very few players left from the squad that reached the 2020 Maryland 2A quarterfinals before falling to Douglass in the final week of action before the season was canceled. One Saturday, they showed some intriguing young pieces.

“It’s been good,” Agyeman said of playing such a key role as a freshman. “My teammates and my coaches, they all push me to do good - they don’t look at me as a freshman. They’re like, ‘If you want to play up here, you’ve got to play with the big guys.’ … I’m playing with more confidence, shooting the ball. Everybody always tells me, ‘Jonas, shoot the ball,’ so now I’m starting to get it now and starting to shoot with more confidence.”

Lamberth said he knew going into the season he and his coaching staff would have to be patient with so few experienced players returning.

“ We sort of knew going in that we would have to do a lot of teaching and there was going to be a lot of learning,” he said. “And a learning curve for all of them. Jacory had to learn how to play with guys that are new to him, and also to try to lead and explain to them, ‘This is what we do at this school.’ So it’s been a challenge for everybody - coaches and returners like [2022 forward] Niko [Woodland] and Jacory. But from the time that we started until now, there’s been tremendous growth. And that’s really been how Thomas Stone is - we’ll start slow, but we want the kids to learn and just get better.”

That doesn’t mean the rookies can’t aim high, however.

“We want to win states,” Agyeman said. “Make it all the way down there and win it, and bring home the trophies.”