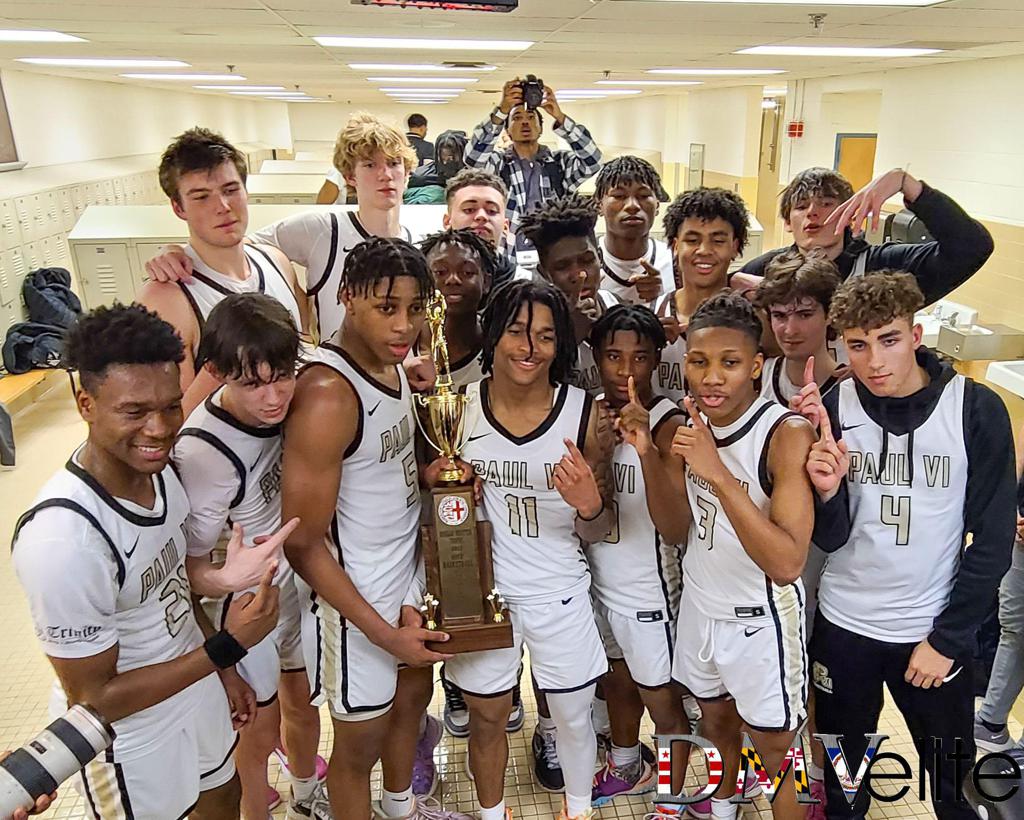 FAIRFAX, VA - With time winding down in the biggest game of the season and trailing by a point, Paul VI got the ball in the hands of its best playmaker, and let him handle the rest.

After pulling three defenders toward him, star 2022 guard Dug McDaniel drove and found 2025 forward Jaquan Womack for the go-ahead bucket with 0.7 seconds remaining to lift the Panthers to a wild 43-42 victory over Bishop McNamara for the Washington Catholic Athletic Conference Championship in front of a capacity crowd at Robinson Secondary School.

“We were trying to get a shot for Dug off the step up,” Womack said, “but then Dug was getting double-teamed so he saw me wide open on the block and then I saw the clock and then I just turned and shot it. I tried to draw the foul then it actually went in. It felt great, man, I didn’t even know how to act and I was just going crazy. Then I saw all my teammates in my face and then I was like, ‘There’s no way I just made that.’”

The victory gave PVI its first WCAC title since 2014, and came in a year where many assumed - incorrectly - that the Panthers might have been too young to make a title run. PVI got key contributions from its young talent all season, including Womack, 6-9 freshman big man Christian Gurdak and 2024 guard Ben Hammond on Monday.

“We had a lot of doubters in the beginning,” McDaniel said. “They said that we were in, like, a rebuilding year - you know, I’m the only senior on the team. But my guys fought hard all season. I instilled that hard work mindset in their minds that it didn’t matter - freshmen through seniors we all can do it, and anybody can step up. I’m proud of my guys; everybody stepped up today.”

Monday’s game was played at Robinson instead of the usual site American University partly due to COVID-related capacity restrictions in DC. There were no such limits in Virginia, and the crowd reflected it, with spectators filling the bleachers and the baselines. The energy down the stretch was palpable.

“I mean it was crazy, we couldn’t hear nothing the coaches were saying,” Hammond said. “We were all just out there playing together and talking to each other. We knew we were going to come out with the win; we’ve been in those tough positions before. We knew it was going to come down to the last play, and we knew we were going to have to trust each other to hit those big shots that Jaquan Womack hit.”

McNamara’s Chase Lawton opened the scoring with a wing 3-pointer, but PVI’s Brendan Robinson matched it on the next possession, and the first quarter was back and forth, with PVI ultimately grabbing an 11-8 lead after the first eight minutes.

Mustangs star big man Favour Aire was saddled with early foul trouble, picking up his second with 56.3 remaining in the first quarter. McNamara’s talented young guards - led by Lawton and 2023 Jeremiah Quigley - carried the load in his absence, and the Mustangs went into the locker room at halftime with a 21-20 lead.

McDaniel and Harris-Smith made free throws to give PVI a three-point lead, and Hammond came up with a steal that resulted in a Harris-Smith layup to put the Panthers ahead 39-34 with 3:10 to play.

The Mustangs weren’t done, however, as Quigley drove for a bucket and got the foul, converting the foul shot to cut the PVI lead to 39-37 with 2:57 to go. He followed that with another bucket after a PVI shot clock violation to tie the game at 39-39 with 2:12 to play.

The final two minutes were especially frenetic. An Aire free throw put McNamara up 40-39 with 1:31 to play, but McDaniel followed with a bucket to put Paul VI back in front 41-40 with 1:11 remaining. Quigley rolled in a stepback jumper with 33 seconds to play to give McNamara the lead, and on the ensuing possession, McDaniel’s leaner came up short but the ball went out of bounds off of McNamara with 13.2 seconds remaining to set up the final sequence.

Paul VI coach Glenn Farrello said the original plan was get the ball into McDaniel’s hands off the inbounds, but McNamara jammed it up and Hammond threw the pass to Harris-Smith, who handed off to McDaniel on the right wing.

McDaniel retreated to halfcourt, then used a high screen from Gurdak to free himself and drove to the left wing. McNamara’s Quigley recovered to meet him at the foul line, and was joined by Lawton, with Aire shading over from the rear with 5 seconds remaining. McDaniel’s pass found Womack just outside the block, and he dribbled once before powering up into Aire’s chest and dropping in a shot from off of the backboard.

“We wanted [McDaniel]  to have the ball up top and then let him get downhill,” Farello said.  I think Christian was the one that kind of stepped up, and he came off that and they of course went to him, and he gave the ball up to a freshman to let him make that shot. I thought it was an amazing decision for a point guard like that to give the ball up for that when he could have taken maybe an off-balance shot - we would call it a hero shot, and what bigger hero moment would there be than to win a championship - and he gave it up.”

McNamara had one last gasp with 0.7 seconds remaining, but McDaniel intercepted the inbounds pass, launched the ball skyward and let out a scream as the PVI student section swarmed the court to celebrate.

“It was great being a part of that,” McDaniel said. “I was happy for myself since I’m a senior, but I was more happy for my guys. We have a young team, and that was some guys’ first time experiencing that type of atmosphere. I’m just glad that we all kept our composure and that we willed ourselves to that win.”

“I thought our defense was amazing and gave us opportunities to win, because, man, we did not shoot the ball well from the perimeter,” Farello said. “At halftime we were 2-for-20 on jump shots. I don’t know what it was in the second half, but I don’t think it was much better. Our defense kept us in it, and our rebounding in the fourth quarter was amazing. DeShawn was everywhere grabbing rebounds. I’m just really proud.”

The win capped a strong WCAC season for the Panthers, who entered the tournament as the top seed after a wild season of conference play in which there was more parity than in recent years.

“I think it’s the best league in the country and it is for a reason,” Farello said. “I think the programs are amazing. We didn’t have that elite team that could just pull away from everyone, so it was wide open and it gave us an opportunity to let the young guys grow up and make plays. Dug was the best player in the league, and when you have that, and you have a guy like that, he led us to this.” 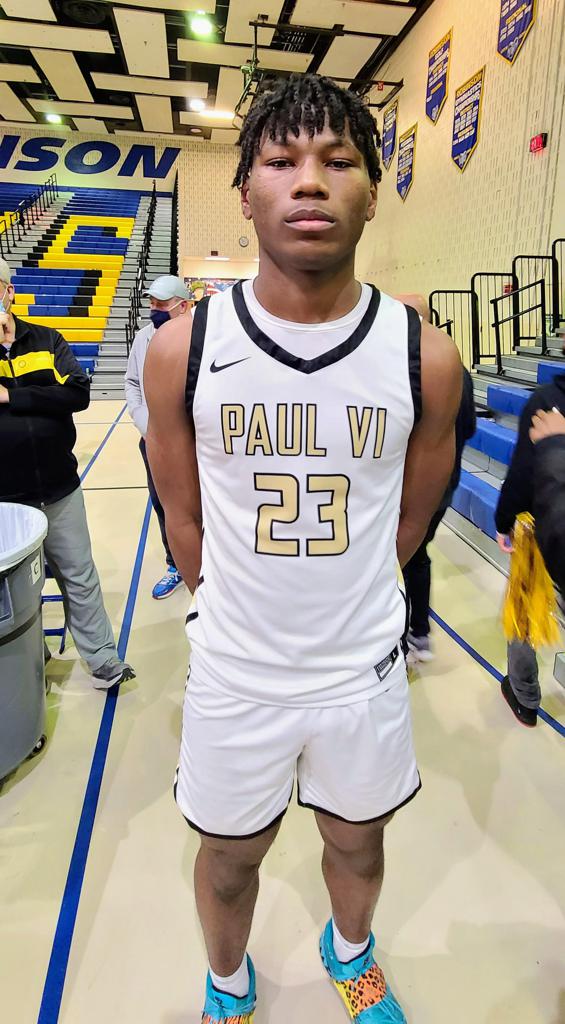