The Blue Hens Are Headed To The Big Dance 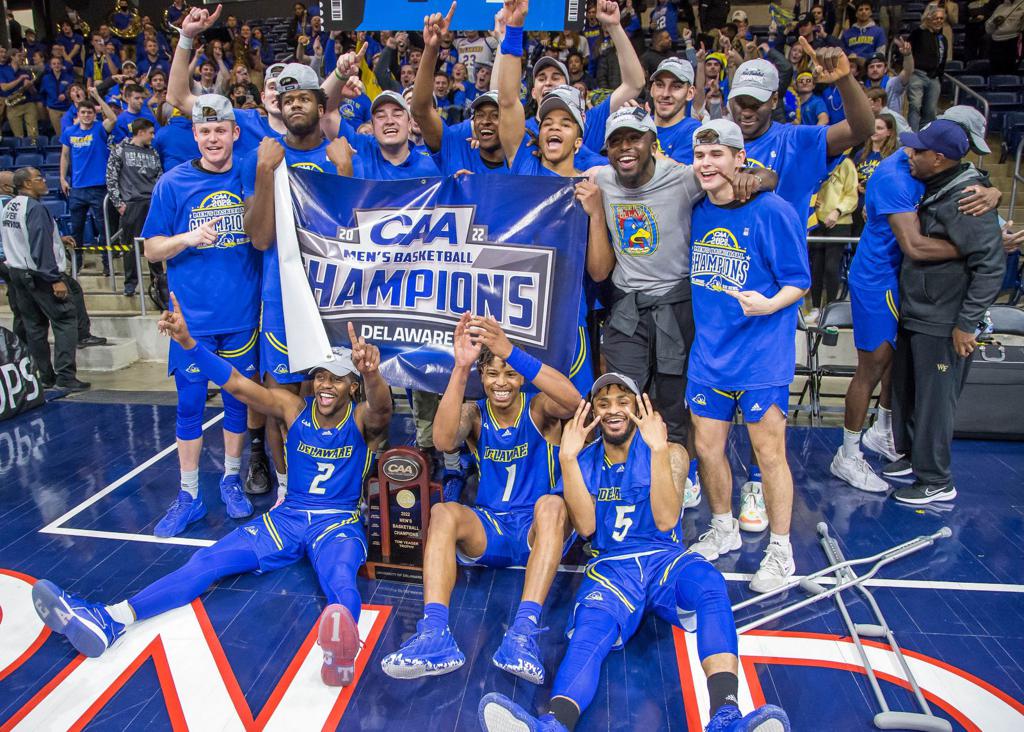 “We’re number one, baby,” said Allen, before leading his teammates toward fans of the Blue Hens at one baseline.

The Blue Hens knocked off three higher seeds to win three days in a row.

Allen, a product of DeMatha Catholic High, made a key defensive stop in the final minute against the Seahawks.

The graduate student guard had 10 points off the bench in 27 minutes and added two assists and two rebounds.

“This feels great. First of all, shoutout to PG County,” said Allen, after giving hugs to several friends on the court. “Shoutout to DeMatha. It feels amazing, man. Five years (at Delaware). I had never won a major championship like this in my life.”

The Blue Hens were also aided by Magruder (Md.) product Ebby Asamoah, a starting guard who came up with a huge offensive rebound off a missed free throw from Carr with about 13 second left.

Even though he had just two points, Asamoah had a big moment when it mattered.

“That was a real crucial play,” Carr said of the resident of Rockville. “Ebby has my back. He is super tough out there.”

Asamoah then made two free throws with 11.1 seconds left to make it 59-55 and seal the first CAA title for the Blue Hens since 2014.

“I can’t say enough about our team and our believe in each other and believe in our program,” said Delaware coach Martin Ingelsby. “That was a tough, physical game back and forth with a lot of lead changes.”

There were seven lead changes, 10 ties and the Blue Hens led for just 6:27.

They had to overcome a season of several injuries to key players. Allen didn’t play Dec. 5 due to a hip injury and was suspended for the game with Iona on Dec. 21. He has come off the bench in 13 games this season for the Blue Hens, who will find out Sunday who they will face in the NCAA tournament.

Delaware entered the tourney as the No. 5 seed and knocked off Drexel, Towson and the Seahawks.

“I was willing to sacrifice anything and I finally got it,” said Allen, who grew up in nearby Bowie, Maryland.

Allen was one of several players who decided to come back for another season.

Fellow DeMatha product Reggie Gardner played in the first half for the Blue Hens. Other area players on the roster for Delaware include Logan Curtis, who went to Calvert Hall (Md.) and transferred from East Carolina; Davis Long, from Sherwood (Md.) and Wes Peterson, a product of Bishop O’Connell (Va.).

For good measure, assistant coach Corey McCrae played and coached at DeMatha and was with the Stags’ program when Allen was a freshman at the Hyattsville school.

The Blue Hens won the battle of the boards 42-32 and had just 11 turnovers.

Said Carr: “For me personally, we as a team have so many offensive weapons. You have to pick your poison.”

Now the Blue Hens are CAA champs for the first time since winning the title in Baltimore in 2014. Delaware had lost the previous five CAA tourney contests against UNC Wilmington, which beat the Blue Hens twice in regular-season play – including 69-62 on Feb. 26.

“It is great for the state of Delaware,” said Ingelsby, in his sixth season. “I wanted them to enjoy a night like this, and cut down the nets. It is like Christmas morning to watch Selection Sunday.”

Editor’s note: David Driver has covered college hoops in the DMV for 30 years. His book, “Hoop Dreams in Europe,” will be available on Amazon later this week; he can be reached at www.daytondavid.com or davidsdriver@aol.com