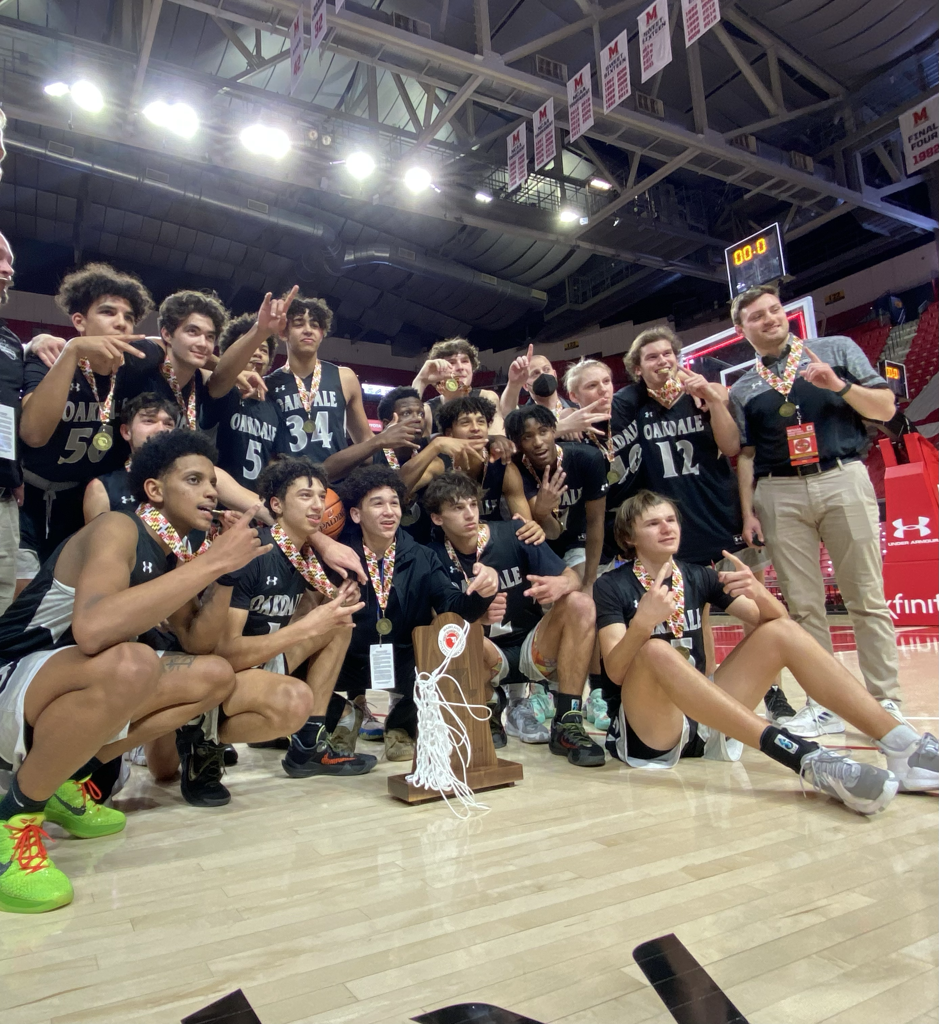 “I don’t think anybody is going to want to play us in the playoffs,” Long would say in spite of the Bears eventually losing to three of its six sectional opponents in the regular season, thus failing to even reach the conference championship game.

On Thursday inside the University of Maryland’s Xfinity Center, Long’s belief had become something of a prophecy.

After tearing through the MPSSAA Class 3A bracket as a lower seed, Oakdale dismantled Huntingtown in the championship game, 61-40, for the first title in program history.

Two nights prior, the Bears (21-7) handled Howard County’s winningest team in Atholton by 16 points to advance to its second state title game in the school’s 13-year existence. The other title game appearance came in 2014.

Since then, Oakdale made its way to the state final four in five of the last seven seasons.

In order to win the program’s first title, the Bears received a game-high 23 points from 2022 guard Alex Hawkins, an additional 19 points from Shepherd-bound guard Cameron Dorner and, as a group, held Huntingtown to just 26.4 percent shooting.

The Bears, meanwhile, shot 46 percent from the field and knocked down five of 10  3-point attempts.

“I really don’t know what to say at this point … we’ve been chomping at the door for years,” Long said. “This is our fourth [state tournament appearance] in a row. It’s so good to be on the other end of this.”

The glaring stat of the night became Oakdale’s 43-4 combined advantage in the opening four minutes of each quarter.

Oakdale started the game on a 9-0 run and, even after Huntingtown worked through one of its many scoring lulls to trail 16-11 at the end of the first quarter, ignited the second quarter with the same sort of fire.

Huntingtown rattled off five quick buckets before halftime to draw within 32-21, but Oakdale was only getting started.

The Bears led by as many as 26 points late in the fourth quarter. All told, Oakdale assembled one of the best defensive performances of the season off the energy of 2024 point guard Evan Austin, who held Hurricanes leading scorer, 2022 guard Kyle Jones (12 points) to one field goal in the second half.

Austin finished the game with 14 points, a game-high four assists and five steals.

“That’s been our staple all year. I think anybody who covers basketball in Frederick County knows Oakdale for toughness,” Long said. “It’s that grit. It never changed, whether it started with Coach [Terry] Connolly with his group, Zach Thomas and Clay Conner.”

To reach its program peak, Oakdale brushed off regular season losses to Linganore, Frederick, Walkersville and Tuscarora. The Bears also needed two buzzer-beaters, the first in the second round on the road versus Tuscarora and the second at Damascus in the round of eight.

In between, Oakdale edged intra-city rival Thomas Johnson in a three-point affair.

“The list goes on and on. It’s a gauntlet,” Long said. “It wasn’t easy. The common denominator out of that is, every coach that shook my hand at the end basically said, ‘How in the heck are you the eight seed?’”

“I think we came out of the hardest region out of all the teams,” Hawkins added. “I really think we were made for this. We were battle-tested. We were ready to go against the best teams out there.”

As for the game itself on Thursday, Oakdale wanted to set the tone defensively, forcing Huntingtown, a team with size, to as many short-lived possessions as possible.

The Hurricanes gathered 16 offensive rebounds but only turned that into five second-chance points.

“I really don’t have much to say about the game,” Long said. “Other than that, we just played so hard. I’m so proud of these guys, these seniors. I hate to see them go.”