Aaron Herron scored the game-winner as time expired to down Douglass. 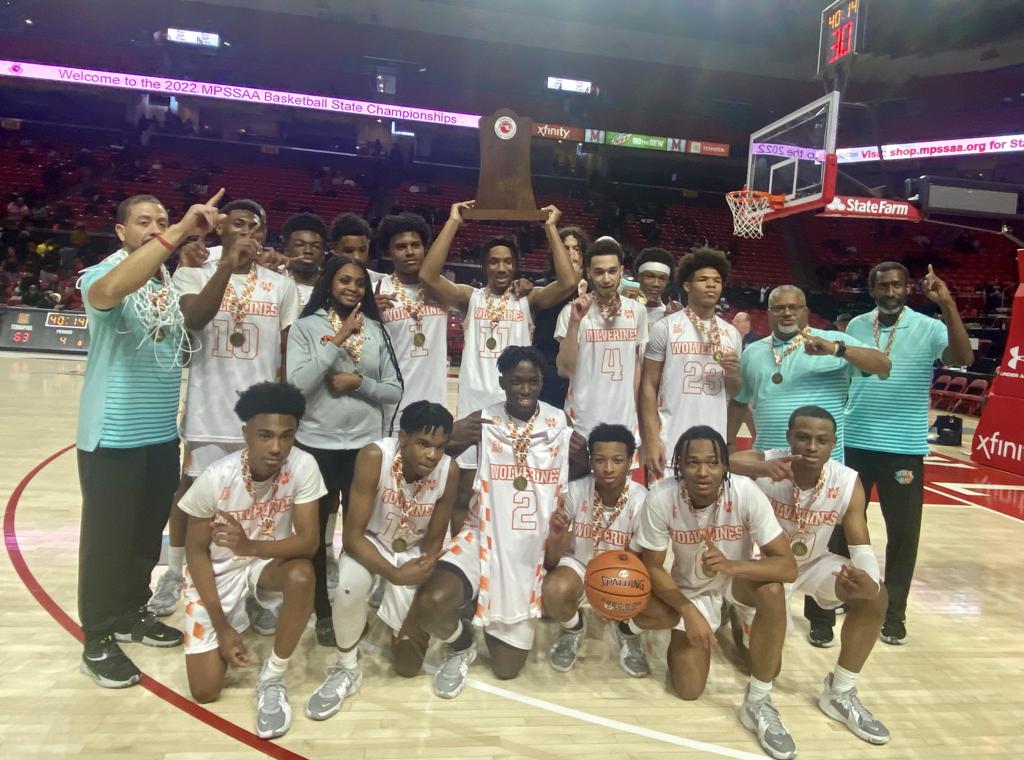 Herron’s layup off an inbounds play with 1.1 seconds left in regulation minted the Wolverines  as MPSSAA Class 2A boys’ champions in a 63-61 win over Frederick Douglass at the buzzer Saturday at University of Maryland’s Xfinity Center.

How quickly everything developed made it difficult for Herron himself to process the crowning achievement. Then it became clear the Wolverines officially erased a five-point deficit with two minutes remaining for their first title in program history when the celebration never stopped.

“I just looked around, and everybody was running around,” Herron said. “So I just started running around. I didn’t know if it went in or not, but my teammates told me it did.”

Saturday’s title match pitting the Prince George’s County champions and runner-ups of the Southern Maryland Athletic Conference was bound to come down to the last possession.

The lead changed hands seven times, with 10 instances in which the game had been tied.

“Everybody on this team believes in each other,” Jackson said. “I just happened to have a big game tonight. We just played together.”

Douglass nearly overcame Jackson’s scoring attack, rallying from an early 13-4 deficit to storm ahead, 46-37, late in the third quarter.

The Eagles turned things their way by switching from man-to-man defense and to a 2-3 zone, which helped create 17 turnovers.

When the deficit grew to nine points, Westlake coach Ed Mouton opted for the timeout that flipped the script.

“We knew it was going to be a game of runs,” Mouton said. “I told the guys, I said, ‘Hey, we’ve been here before. We’ve got to grind.’ You don’t win the game at the beginning of the fourth quarter, so we played 32 minutes and I thought we played great defense.”

Westlake 2022 guard Jaiden Wheeler knocked down the 3-pointer that tied the game at 52 with four minutes remaining. Douglass went ahead 59-54 not long after, but from there, Westlake ended on a 9-2 run.

Frederick Douglass coach Tyrone Massenburg anticipated overtime as he stared down the last possession from the end of the floor. Makhai Arnold, like Herron, didn’t come to grips with the final outcome until the Westlake bench stormed the court for joy.

“We didn’t know if [the shot] was on time or not,” Arnold said. “The ball went through the hoop and they celebrated. We’ll live with that.”

“My initial reaction was, I thought it was overtime,” Massenburg added. “Obviously when they ran on the court, nothing else happened. I saw the referees leave. So that was it. … A guy just slipped open right at the end. They made the play.”

Prior to the last shot, Mouton prepared for Douglass to switch from its 2-3 zone to man-to-man. Jackson, Westlake’s leading scorer, was tasked as the inbounder responsible to make the game-winning read.

So when Douglass switched defenses, Herron slipped by his defender and found what had been enough space for the title-capturing bucket.

“Thank goodness, because I didn’t want to go to overtime,” Mouton said. “It happened so fast. I didn’t know if [Herron] traveled. It seemed like the ball was bouncing around the rim and then I heard the horn go off. The guys in the locker room said the ball was [still] in his hands [when the buzzer sounded]. I’m just glad it’s over.

“That’s what I’ve been telling the guys all year: these types of games come down to the last possession, like who’s going to execute. We were fortunate enough to execute at the end.”