The Raiders outlasted Churchill in 2 OT's to take the crown. 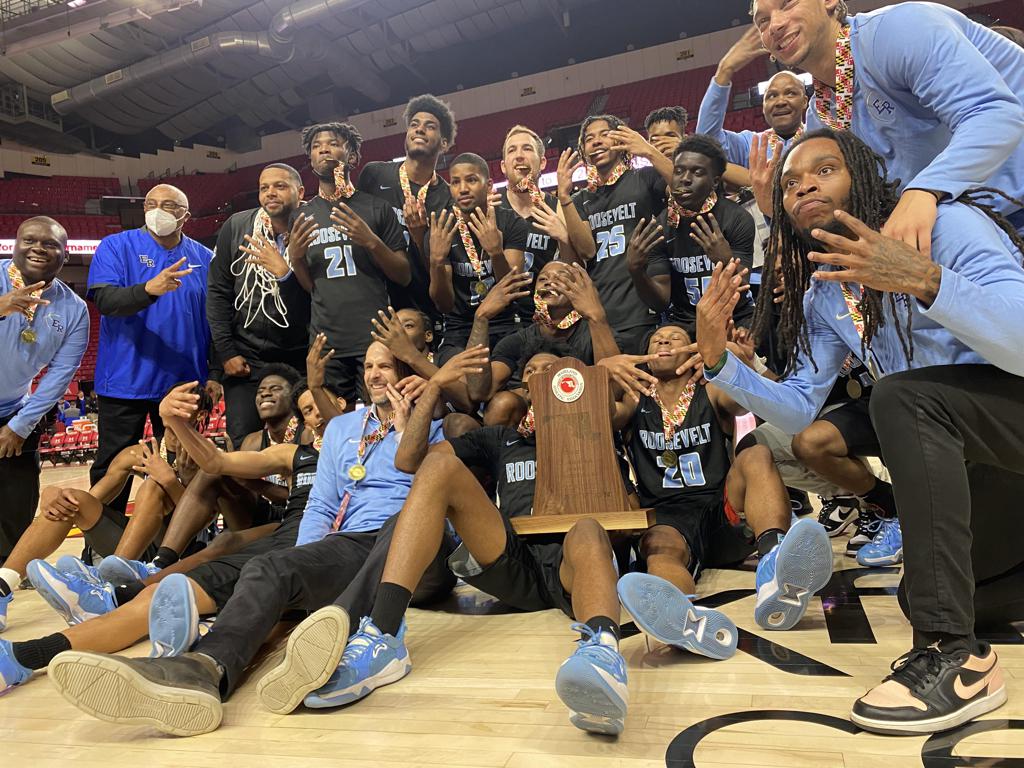 COLLEGE PARK, MD – The shots struggled to fall and a 10-point lead had vaporized, but Eleanor Roosevelt coach Brendan O’Connell never once doubted the course of Saturday’s MPSSAA Class 4A title game.

“They know why they’re winning games,” O’Connell said on the Raiders’ journey to University of Maryland’s Xfinity Center against Winston Churchill. “It’s not because we’re super pretty offensively. But you can scout us, and you’re not ready for these two – [2022 guard James Rice and 2022 forward Jaylin Payne] – defensively.”

Eleanor Roosevelt shot less than 30 percent, turned the ball over 23 times and missed 17 free throws as their biggest game of the season went to double overtime. Most importantly, though, it never lost touch with the same championship mettle that’s elevated the program over the last decade.

The Raiders outlasted Churchill, 54-49, for their fourth state title in nine seasons.

Rice finished with a game-high 18 points with his frontcourt counterpart Payne chipping in six points, 18 rebounds and four blocks – part of a performance that shut down Churchill’s offensive attack.

2022 guard Fani Lewis contributed 12 points and helped seal the game by making eight of 12 attempts at the free throw line.

The Bulldogs finished 11 for 49 shooting, missed the first 16 of 17 shots from the floor and turned the ball over 29 times. Eleanor Roosevelt also held Churchill leading scorer, 2023 guard Tre Stott, to 11 points.

The Raiders, like the other public schools in Maryland, hadn’t had the chance to play in the state tournament since 2019 because of COVID-19 pandemic conditions.

Roosevelt won the title then, too, and molded the latest run at back-to-back championships around returnees Lewis, Payne, Rice and 2022 guard Carlos Kinard.

The Raiders led every step of the way Saturday until there four minutes left in regulation. Tobi Raji’s layup propelled Eleanor Roosevelt (26 points in the paint) ahead 19-9 minutes before halftime, but Churchill ended the second quarter on a 7-0 run.

With four minutes left in regulation, Andrew Silver (11 points) hit two free throws to climb Churchill out of the deficit, 31-30.

“I don’t think anyone panicked on our bench,” O’Connell said. “Their mentality has been great the whole time. It’s easy to manage that when they believe they’ll win the whole time.”

Churchill had chances to take the lead and tie the game late in double overtime, but a turnover and Silver’s off-balance attempt from deep turned the Bulldogs away empty-handed.

Rice and Lewis combined to make five of their last six free throws to put Eleanor Roosevelt on top of the public school basketball scene once again.

“That game right there defines it,” Lewis said. “We didn’t know how it would go … but we kept believing in each other. We got it done.”