Wilson's Darren Buchanan Adds To His List Of Accolades. 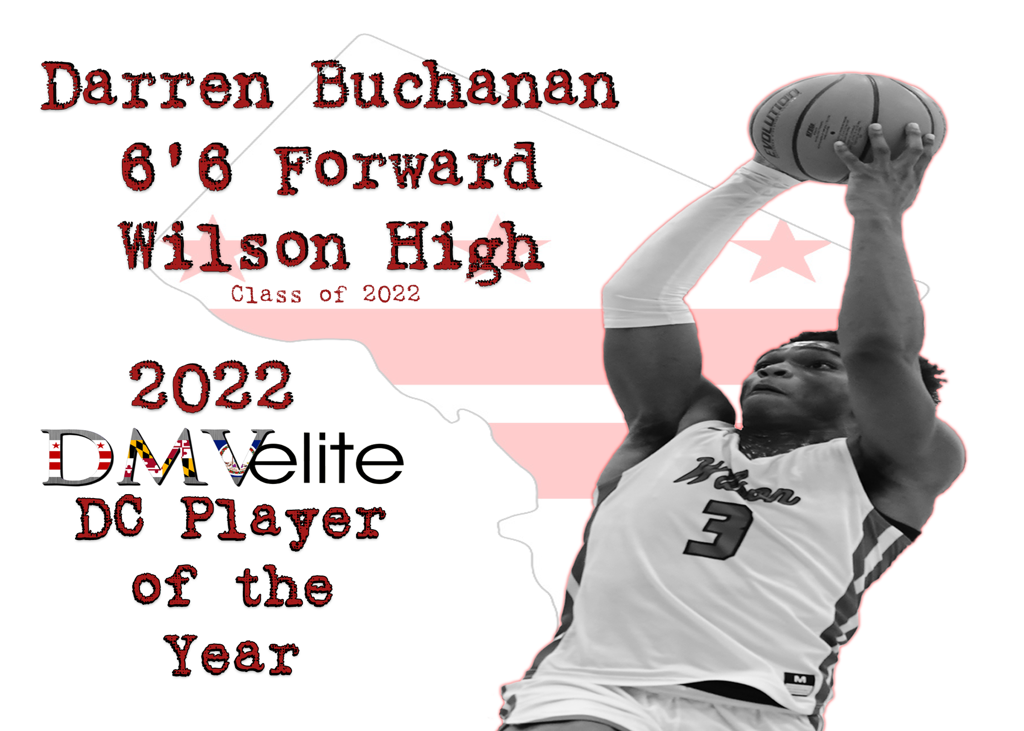 After a one-year hiatus due to the COVID-19 pandemic, we are pleased to announce the return of our DMVelite All-District selections for Washington, D.C.

Our staff would like to thank the players, coaches and fans who made the 2021-22 season – our 12th year of high school coverage – a success, and we look forward to many more. In addition to this All-DC team (which features only players from schools located in the District), we'll be rolling out All-Maryland and All-Northern Virginia teams next week.

And now, here’s our selection of the District’s best of the best – the 2022 DMVelite All-DC Team:

After the COVID-19 pandemic scuttled his junior campaign, Buchanan reemerged with a vengeance. The Virginia Tech commit averaged a double-double with 17 points and 10 rebounds per game - he also led the Tigers in assists at 2.9 per contest -  while leading the Wilson to a 27-5 record and the District of Columbia Interscholastic Athletic Association (DCIAA) Championship.

Buchanan was named DCIAA, DC State Athletic Association (DCSAA), Gatorade DC and Washington Post All-Met Player Of The Year, and now adds another one to his impressive collection.

Singletary guided the Quakers to one of their most successful seasons in school history, winning the MAC title - they went unbeaten in league play - and earning a thrilling DCSAA title victory against Wilson for the second time in three years. The Quakers were invited to participate in the inaugural State Champions Invitational in Florida earlier this month, and finished the season 29-2.

The George Mason commit capped his stellar career with a strong senior campaign, averaging 17.8 points and 3.4 assists per game.

The 6-foot-6 Dockery gave the Tigers another matchup nightmare for opposing defenders, averaging 14 points, 4.5 rebounds and 2 assists per game for the DCIAA champs.

One of the area’s top scoring threats, Gaskins led the DCIAA at 20.8 points per game, and eclipsed the 30-point mark three times. He has committed to play his college ball at D-2 Assumption University (MA).

The Quakers’ floor general averaged 11.7 points per game while helping the squad to a 29-2 record with MAC and DCSAA title along the way.

Vavers came to Carroll from Latvia as a sophomore, but had his first year interrupted by a passport issue and his junior year wiped away by COVID. In his senior year he broke out, emerging as one of the area’s top shooters (61 made 3-pointers) while averaging 14.1 points per game.

Walker turned in a dominant senior campaign, posting 16.6 points and an eye-popping 19.7 rebounds per game for the Colts. He has committed to D-I Robert Morris (Pa.).

Webster made an immediate impact in his first year after transferring from St. John’s, averaging 15.9 points per game in a breakout junior campaign.

The youngest of three brothers who have played at Sidwell, Williams put himself firmly on the radar with a strong sophomore campaign, averaging a team-high 12.2 points per game for the City’s top squad.