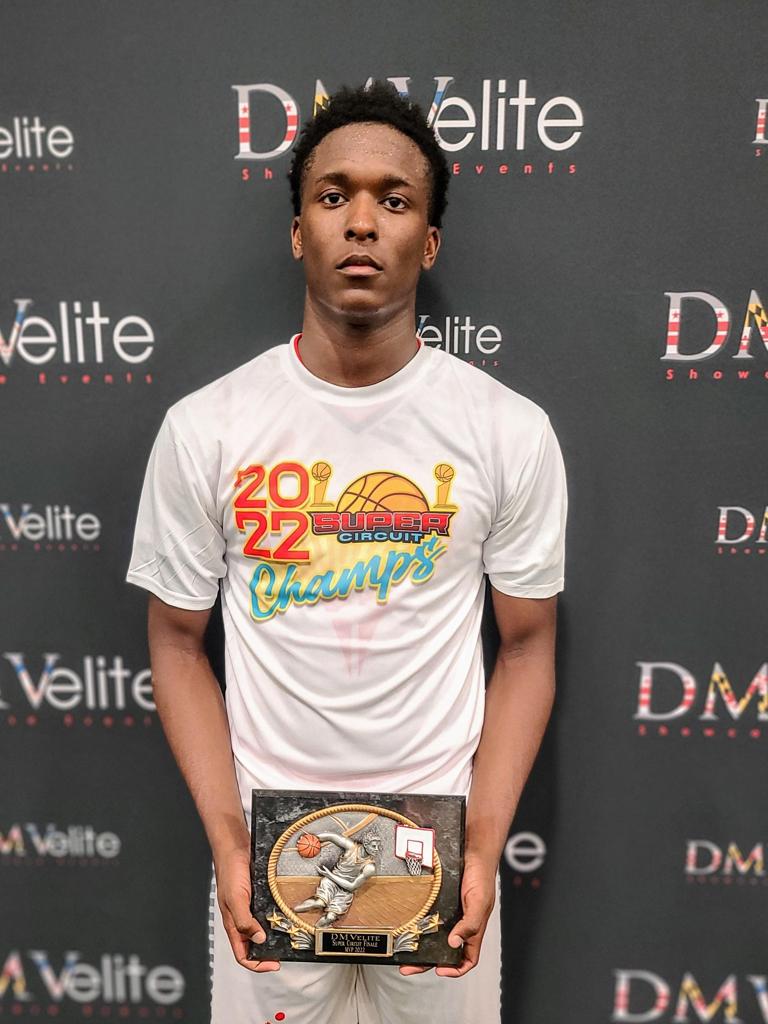 HAMPTON, VA - The 2022 DMVelite Super Circuit came to a close on June 25-26 with the crowning of champions for the 11U-17U Divisions at the Boo Williams Sportsplex.

Team Silk captured the 17U title, but it wasn’t without a fight, as they outlasted Man II Man Soldiers 46-44 in a double overtime thriller on Sunday afternoon.

“It really came on the defensive end,” Silk guard Myles McDuffie said. “When we turned our defense up, our offense started going.”

Here’s a look at standouts from the 17U Division’s final session:

Monroe is no stranger to winning, having helped lead Lake Clifton to the Maryland 1A State Championship in the spring. That experience came in handy late, as he calmly nailed the go-ahead free throws in double overtime to lift Silk to victory.

“I’ve been playing with these guys since like 6th grade,” he said, “so we already had a good chemistry. We knew to keep our heads and stay together in the game and just pull out a win.”

The 6-foot-2, 201-pound 2023 guard finished with a team-high 12 points in the title game and led Silk with 12.7 for the weekend. He was especially strong defensively, which he said he uses to get his offense going. On the final possession of the second overtime, his perimeter defense helped to eat the clock and force a desperate heave at the buzzer that fell short.

“I like to play defense first and then let the game come to me,” Monroe said. “I don’t want to rush it, because that’s when you get overwhelmed and start trying to do too much on my own. I let my team come to me and help my team.”

Now that he’s on a winning streak, Monroe said he’s hoping to keep it going when the high school season rolls back around.

“It helped out a lot,” he said of the state championship helping to raise his profile. “I mean, I worked for it. So that helped out a lot winning states because I wanted to win states and I’ve got another year. I want to repeat and do the same thing again.”

Neverdon hit the biggest shot of Sunday’s title game, drilling a 3-pointer in the final seconds of the first overtime to force a second extra period.

“We first had a play where we thought the ball was all the way down the court,” Neverdon recalled, “and then once we realized the ball was on the side we drew up a play where I was supposed to cut to the corner.”

Neverdon said that play got caught off, though, forcing Silk to go to its second option in guard Myles McDuffie. That got blown up, too, though.

“They cut him off,” Neverdon said, “and [Kijuan Haggert] got it and came off and set me, like, a little down screen and I caught it. I didn’t know how much time was left, so I just caught it and shot it. Once I let it go, I knew it was good, I felt it and I was like, ‘Yeah, that’s good.’ I knew once we got into overtime we were going to be able to close it out. All we had to do was get to that stage and we were good.”

Neverdon averaged 8 points per game for the weekend.

Billings (South Lakes 2024) was strong all weekend, using his blend of size (6-foot-2, 255 pounds) and quickness to keep defenders off balance.

Billings averaged a team-high 13.7 points per game, and had a game-high 17 points in the double overtime  championship game loss to Team Silk. He showed his range by hitting three 3-pointers in Session 4.

Billings is a two-sport athlete who has attracted some Division I interest for football as a defensive lineman.

“One of the first [basketball] tournaments I sprained my ACL and dislocated my kneecap,” he said. “But I came back like a month and a half ago and it's been good. I’ve been just going to football camps and playing AAU and just working out.”

A 2024 guard from Westfield (Va.), Kennedy impressed with his quickness, vision and ability to control a game, and was instrumental in Man II Man’s run to the title game. He averaged 13.3 points per game for the weekend and had 12 in the final.

Crawford was strong throughout Session 4 for Team MD, scoring double figures in all three games while averaging a Division-high 16.7 points per game. He had 19 to keep things interesting as the Stars dropped their opener to eventual champion Team Silk, 59-50.

Jennings (Northwestern-PG) had 15 points and hit three 3-pointers to lift Metro to victory in its final game Sunday, downing Team Maryland Stars, 42-34. He averaged a team-high 10.3 points per game for the weekend.