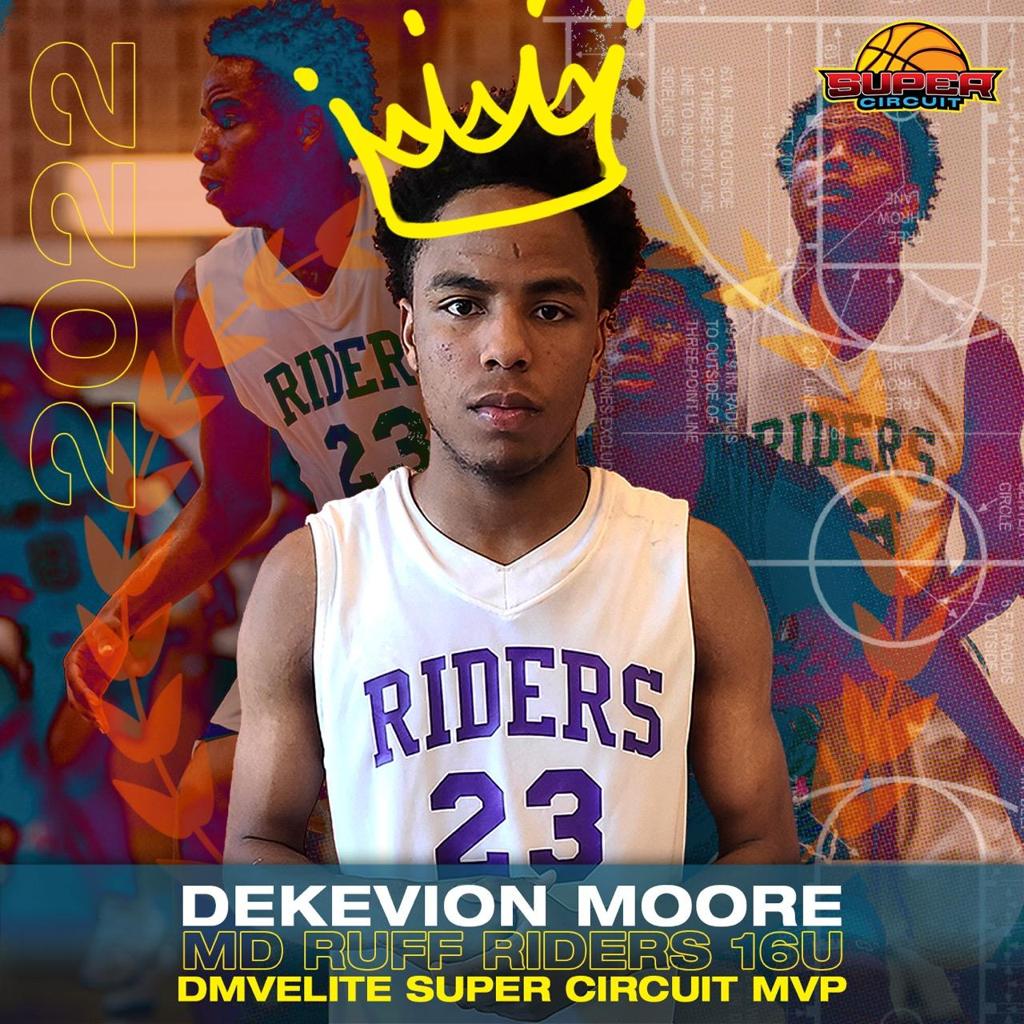 For the second year, the DMVelite Super Circuit provided exposure and competition to 15U-17U programs across the DMV and beyond.

Without further ado, we are pleased to present the 2022 All-DMVelite Super Circuit Team (Players must have appeared in a minimum of two Super Circuit events to qualify.):

A year after leading the Ruff Riders to the inaugural Super Circuit 15U crown, Moore was even better at the 16U level.

The Forest Park (Va.) 2024 guard was the Super Circuit’s most consistent performer, leading the Riders to a 9-1 record while averaging a team-high 14.4 points per game.

Moore’s Ruff Riders suffered an upset elimination round loss in Hampton to deny them a second straight title, but despite falling short of their ultimate goal, Moore did enough to earn Circuit MVP honors. He said he felt his biggest area of improvement from last summer was in sharing the ball.

“My passing and getting my teammates more involved,” he said. “Last year I was worrying about buckets too much. This year, I felt like I didn’t really care if I had two points or eight points, I just wanted to win the game. Last year I wanted to score, and this year I feel like I’ve become more mature and wanting to win and pass the ball more.”

Not coincidentally, Moore’s improvement caught the eye of college coaches, and he picked up his first Division I offer from Rider in June.

“At first it felt surreal, but I just stay humble,” he said of the offer. “I think about it, but I just work. Now that school’s out, it's easier to put more work in, so I wake up in the morning, get shots up, lift, got to practice with Coach Steve [Jiggetts] and get that little workout in. But the offer? It feels surreal. It didn’t feel like it happened, but it happened.”

With his continued improvement, it shouldn’t be the last.

The 2025 guard from Overlea (Md.) exploded onto the Circuit in Session II, setting the event scoring record with 45 points while hitting 10 3-pointers in his debut. He didn’t repeat that effort but was HC United’s top offensive weapon the rest of the way, averaging a team-high 17.9 points per game in three Circuit stops.

A 2024 guard from Calvert Hall (Md.), Johnson was a difference-maker down the stretch for the 16U Division Champions, averaging a team-high 17 points per game.

McDuffie (Lake Clifton 2022) was a standout on the Maryland 1A state championship squad, and kept his winning ways going while averaging 14.1 points per game to help Silk capture the Circuit 17U crown.

The 5-foot-10 Norfleet (Forest Park 2024 guard) broke out in his second Circuit run, emerging as a scoring threat (12.4 ppg) and leader on both ends of the floor for the Riders.

Robinson burst onto the scene during the high school season - earning MIAA All-Conference honors as a freshman at Concordia Prep (Md.) - and he continued his rise on the Super Circuit. He averaged 22 points per game, including 19.2 at Session IV to lead Cutt Nation to the 15U crown.