59 Unsigned Seniors showed there is still plenty of 2018 talent available.

BOWIE, MD – The 2018 DMVelite Unsigned Senior Showcase gave 59 players another opportunity to compete in front of scouts and coaches, and they showed there’s still plenty of talent remaining on the board.

Here’s a look at some of Saturday’s participants: 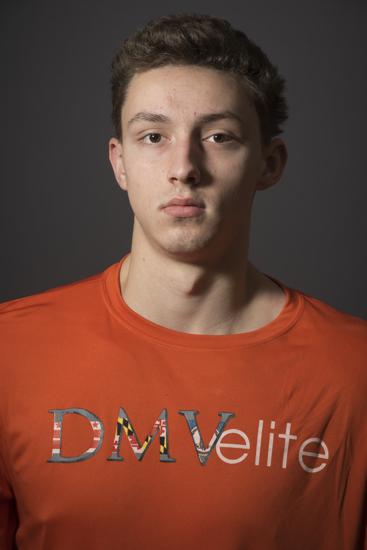 Spurlock (right) was one of the top all-around performers Saturday, leading all players in scoring at 13.5 points per game and finishing third in rebounding at 4.3 boards per game.

“I’m either going to go D-2, or take a prep year and try to go D-1,” said Spurlock, who held D-1 offers from Central Connecticut State and Mount St. Mary’s as a junior.

Spurlock listed his versatility as his biggest strength, adding that he’s also improved his shooting range.

“I improved my 3-point shot a lot,” he said. “Like, last year, I think I shot about 28 percent from 3 and I wasn’t really supposed to take a lot of 3’s, and this year it was up about 40 at one point, which was pretty good. I worked on that a lot.”

Baucum drew eyeballs whenever he was on the floor, with his blend of size (6-foot-6, 230 pounds) and skill making him an intriguing prospect.

“I can finish around the rim, I can shoot the 3-ball,” he said. “I’ve very versatile and I can do whatever you need me to do.”

Baucum has attracted Division II offers, but is still looking for a Division I fit and said he’s currently interested in attending prep school. He split his senior year between Liberty Heights (NC) and Rock Creek, returning to the area in January.

“It was good,” he said of the change. “I mean I adjusted really good and I feel like my Coach [Chris Cole], he pushed me a lot, which made me play, like 10 times harder than I usually play. So it was a good outcome. I wish I would have been there in the first place.” 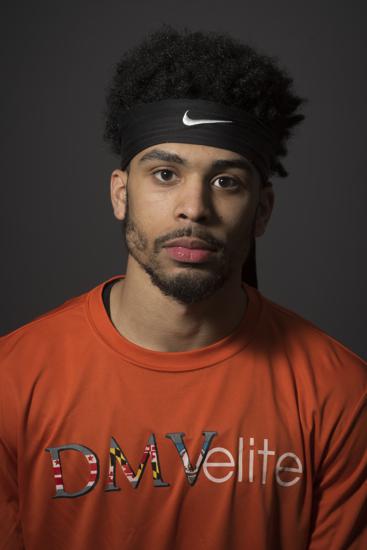 Simmons was one of the more intriguing players in attendance Saturday, coming in off of a highly-productive but truncated senior season.

The 6-foot-1, 175-pounder started his high school career at IDEA (DC) before transferring to Conwell-Egan (Pa.). He returned to the area this summer and was set to attend Capital Christian for his final season, but transferred early in the year. Due to a Capital Beltway League rule regarding in-league transfers - Arundel Christian joined this year - Simmons was declared ineligible to play against league competition. Limited to strictly non-league play, Simmons said he appeared in only “15 or 16” games.

Missing games against the likes of Rock Creek Christian, Riverdale Baptist and National Christian undoubtedly affected his stock, but Simmons made the most of his other opportunities.

“[It motivated me] a lot,” he said. “Just watching them play Beltway teams and not being able to be there with my team on the court, it really hurt me, but it motivated me to show out in every single game that I could play in.”

And show out, he did. Simmons scored 35 points per game in those contests, highlighted by a 90-point outpouring in a win against Rockbridge Academy (Md.). That game marked a turning point in Simmons’ recruitment, with the ensuing attention bringing D-2 scholarship offers from Catawba (NC), Livingstone (NC) and Virginia Union.

“A lot of people changed,” he said. “When that happens, you know, people want to know, ‘Who is this guy who scored 90 points?’ I got a lot of attention from it – a lot of good attention [and] some bad attention, too, but it’s all love and at the end of the day it just pushed me to go harder.”

Despite his offensive accolades, Simmons said his defense was one of his biggest strengths. He was efficient on Saturday, scoring 7.3 points per game on 13-of-16 shooting and dishing out 11 assists to just four turnovers.

Simmons said he’s still undecided on his future plans, noting that prep school is a possibility.

“It’s been great,” he said of the past few months. “I had no idea I was going to go to Arundel Christian, but I ended up in a great spot with great coaches and great teammates. My coaches just believed in me and that’s all I needed was to have one coach believe in me, and my ability showed.” 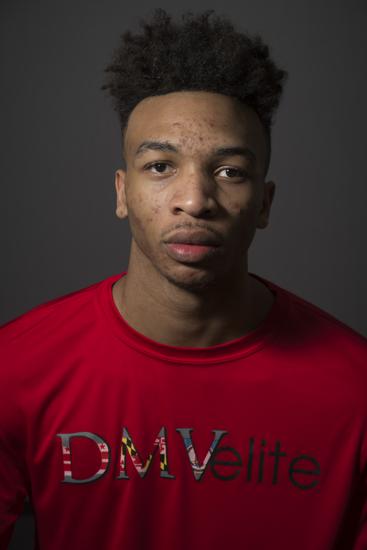 “I think it benefited me a lot,” he said of the move. “Going from playing, like, little small schools to playing big schools like Poly, I think that really helped me and it gave me the experience and showed that I could play with these D-1 guys.”

The 6-foot-1, 220-pound Hobbs had observers talking early due to his blend of size and quickness on the perimeter. One college coach said he looked like a running back, and the comparison looked spot on as Hobbs powered his way into the lane.

“It helps a lot, but it also can affect me [negatively],” he said of his size, “because you know nowadays these little guards like to flop a lot, so if they bump into me, they get the call. But I mean, it helps a lot because there’s really nothing you can do with my size. If you try to reach across it’s a foul or I’m just going to keep going.”

Hobbs said his passing and mid-range game are his biggest strengths, and listed his jump shot and conditioning as areas he’d most like to improve. He’s mainly been heading from prep schools and junior colleges. 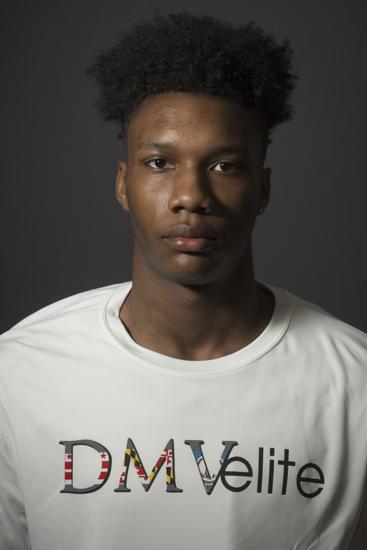 Shingler (right) was another player who benefitted from a senior year move, transferring from Oxon Hill (Md.) to Douglass.

“Me going to Douglass, I think I got a lot better,” he said. “I got more energy and was playing harder and Coach [Tyrone Massenburg] pushed me hard and told me to be a leader. He just told me to play my game, and that’s really all it was.”

The 6-foot-7, 185-pound Shingler is still working to extend his game to the wing consistently, but he looked good around the basket and in the mid-range. Defensively he’s athletic enough to cover guards and is a solid shot blocker and rebounder.

Koskovitch impressed early with his hard work in drills, and carried that into the game sets. He didn’t put up eye-popping numbers - 2.7 points and 2.3 rebounds per game - but flashed a high motor on both ends of the floor, nice footwork and good touch in the low post.

“I would say the strongest strength of mine is my post game,” he said. “All last year during the offseason I worked on my jump hook and my up and under moves and just trying to create opportunities and be dominant in the middle. And since I would be on the block all the time after I score a couple of times, I would have guards coming down on me, so I’m pretty good and passing and seeing my shooters on the outside.”

A bit of a late-bloomer, the 6-foot-6, 200-pounder is an intriguing Division 3 prospect, and said he’s been hearing the most from Goucher (Md.), Hampden-Sydney (Va.) and Utica (NY).

Wherever he ends up, he’ll show up ready to work.

“I know as a freshman I‘m not guaranteed a starting spot,” he said, “and I would like a little competition to fight for that spot. During my sophomore year I was cut from JV. My junior year I came back and didn’t play at all, and senior year I was 6th man. So, I’m used to fighting and climbing up that hypothetical ladder for playing time, and it was fun doing it.” 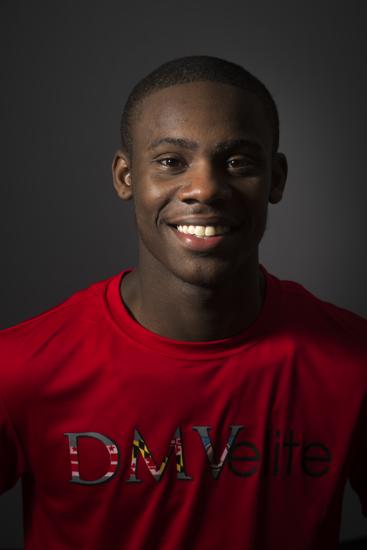 Tyree (right) pushed the pace early and often while averaging 6.7 points per game for Team Red. He said he’s heard from schools at all levels, and is also mulling prep school.

“I think I want to get another AAU run in and I might be able to pick some more looks up, “ he said. “So I think that’ll be better for me.”

Though undersized at 5-9, Tyree is lightning quick and can get shots off from difficult angles – on one play Saturday he was nearly parallel to floor – while attacking the basket.

Jones jumped out early with his shooting stroke in drills, and hit four 3-pointers in game play while averaging 5.5 points per game.

“I think I’m a good shooter,” he said. “I’m a leader and I get after it defensively. The biggest thing I want to improve is my athleticism and my basketball IQ. I want to make even better reads, especially because I’m a smaller guard. A the next level I’m going to need that.”

The 6-foot-1, 165-pound Jones said he hasn’t attracted a great deal of college interest, but will play this spring and summer with CTAB Elite while aiming to build off his senior year success at Hayfield.

“Individually, I think I did pretty good and helped facilitate the team,” he said of the high school season. “I could have done a little bit more scoring, but as a team and as a leader I think I did well. We went 18-10 and went to the first round of states.”

The 6-foot, 176-pounder had a solid final year at MSJ, even if it didn’t end the way he and his teammates hoped.

WILL BRETHAUER, MOUNT AIRY CHRISTIAN (MD) FORWARD: Relatively unknown coming in, Brethauer went to work hard in the drills and impressed in games with a nice shooting touch, finishing 5-of-8 from 3-point range while averaging 6.3 points per game.

DWIGHT FELTON, MT. CARMEL (MD) GUARD: Felton showed a well-rounded offensive game while leading Team White with 8 points per game.  He showed a quick first step that left defenders chasing all morning, and played with great energy on both ends of the floor.

DONALD GREEN, DIGITAL HARBOR (MD) FORWARD: Green was one of the more physically-intriguing prospects in attendance. Coming off of a breakout final season at Digital Harbor, the 6-foot-7, 183-pound Green ran the floor well and looked good attacking the rim. He said Norfolk State has expressed interest.

JORDAN HICKS, WISE (MD) GUARD: Hicks' shots weren't falling as much as they normally would, but he still found a way to contribute by grabbing 3.3 rebounds per game, good for second on Team Black. He's a strong finisher in transition who had a solid senior season at Wise.

CHRIS MAIDOH, PARKDALE (MD) FORWARD: The 6-foot-8 Maidoh is a long athletic forward who runs the floor well and has a good feel for the game. He could benefit from a prep or redshirt year to add some weight, but has a great frame. Has developed good shooting touch.

KENDALL MCFADDEN, OAKLAND MILLS (MD) FORWARD: The physical 6-foot-3 McFadden was highly productive and efficient on Saturday, posting 8 points per game on 11-of-12 shooting while pulling down 2.3 rebounds per game.

MARK MELBOURNE, LOUDOUN VALLEY (VA) WING: Melbourne has good size and athleticism, and displayed his versatility on both ends. He’s strong enough to guard in the post and agile enough to check smaller guards.

TREVON MORGAN, LONG REACH (MD) WING: The 6-foot-3 Morgan impressed with his athleticism and fluidity in the drill portion, and once the games started his momentum didn’t slow. He finished second in scoring at 9.7 points per game and was the event’s leading rebounder at 6.3 boards per contest.

JACQUEZ NAPPER, FAIRFAX (VA) WING: It seemed like Napper was all over the court making plays Saturday,  finishing with 4.7 points and 4 rebounds per game. He's very active and quick off his feet. Unselfish and fit in wherever he was needed.

TYREE THORNTON, POCOMOKE (MD) GUARD: The 5-foot-10 Thornton finished an efficient 11-of-14 from the field while averaging 6.0 points per game. In a setting where players can often press the issue while trying to make an impression, Thornton stood out by not forcing anything and playing under control.

MALIK VOSHELL, POLYTECH (DE) GUARD: The player who made the furthest trip, the 5-foot-9 Voshell looked good while averaging 5.0 points per game, showing nice touch from deep (four 3-pointers) and no hesitation among larger defenders.