The talented 2019 class put on an impressive display, and here’s a look at a few of the senior standouts: 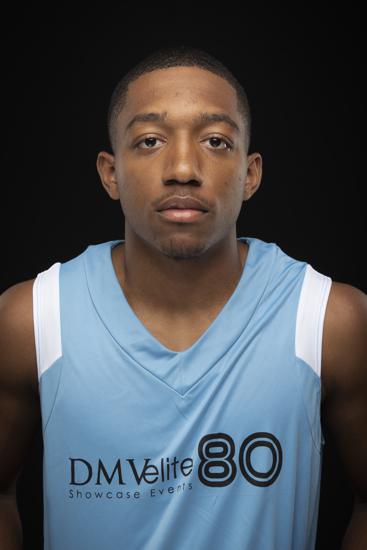 JALEN RUCKER, GILMAN (MD) GUARD
Rucker is one of the area’s most competitive guards, and had it on full display Saturday while averaging a team-high 11 points per game for his Light Blue squad.

Rucker capped his day with a tense showdown with O’Connell (Va.) 2021 guard Brayon Freeman, with the duo trading buckets - and a major dose of trash talk - in the final minute of a 67-58 Light Blue win. Rucker finished with 19 points on 6-of-7 shooting, including 5-of-5 from 3-point range. He finished the day 12-of-16 from the field, connecting on 6 of his 8 3-point attempts.

“[My strengths are] Definitely my competitiveness and my toughness,” he said. “Being able to handle the ball and get in the paint and make open shots. And I think when it’s time to score, I definitely can show that I can score at all three levels.”

Defense is another area where the 5-foot-10 Rucker has established himself.

Rucker currently lists Division II offers from Lincoln (Pa.), Chestnut Hill (Pa,), Millersville (Pa.) and Goldey-Beacom (DE), and is hoping to further boost his stock in his final season with the Greyhounds.

“This year we’ve got a lot of sophomores – I think it’s only three seniors on our team – and we’ve got a couple of freshmen who might be on varsity,” he said. “So I’m just looking to step into a leadership role on and off the court, and just be that person that they can talk to at any time and let them know that when they get into a tough situation in a game, we’ve all got each other and we’re good and we’re going to pull it out.”

JOEL KABIMBA, MIDDLEBURG (VA) FORWARD
The 6-foot-8 Kabimba made his presence felt on both ends of the court, leading Team Blue in both scoring and rebounds per game at 10.7 and 5.7, respectively. He finished 15-of-23 from the field.
For a player of his size and athleticism, Kabimba is still relatively under-recruited, with James Madison and Norfolk State his only offers to day. He said he’s received some interest from Georgetown and Mount St. Mary’s, among others.

“Right now my focus is not getting offers,” he said. “I want to get better every day, and I’m putting in work every day.”

A native of the Democratic Republic of The Congo, Kabimba came to Middleburg his sophomore year.

“It’s been a great experience so far, I’ve learned a lot. Before coming here I had a good base in English, so I didn’t have that much problem to integrate myself.”

When asked his goal for the upcoming season, Kabimba’s answer was simple.

“Win,” he said. “I want to win. Me, my coaching staff and my teammates, we want to win, because this coming year we have a really good team. Most of our players are international – we have like, 5 kids from Canada, one from Germany, another one from Turkey. We have a good team and with me leading this team, I think we’re going to win, because I’ve been putting in work and every single member of my team has been putting in work.”

ASA SHANNON, EPISCOPAL (VA) WING
Shannon was relatively under the radar until a big spring and summer with New World that earned him a D1 scholarship offer from Radford. If Saturday was any indication, though, a whole lot more schools are going to know his name.

Shannon turned heads all day long at Hayfield, leading his Team Black squad to an perfect 3-0 record while averaging team highs in points (8.3) and rebounds (5.0) per game. He went 11-of-15 from the field and also had 5 blocks.

“I’m just looking forward to these fall workouts and getting coaches to see me up close and personal,”  he said, “and when they see me in the season, maybe offer me. We’ll see how it goes.”

At 6-foot-5 and 190 pounds, Shannon has a good frame an impressive athleticism, which he displayed with a huge dunk early in the game action.

“[My strength is] Probably my athleticism,” he said. “I can jump high, but my second jump is a lot [higher]. I can put up a shot and miss it and get right back to it.”

Shannon is no slouch in the classroom, either, and has Ivy League schools showing interest. If he continues his progression into the high school season, he’ll find himself with plenty of options.

Wahab recently wrapped up a series of unofficial visits, and said he plans to trim his list of schools to 5 in the coming week and begin setting his official visits.

The 6-foot-10 Wahab has improved steadily since his freshman year, and said he’s happy with where his game is at the moment.

“I think it’s progressing,” he said. “My offense is getting better, and my defense is still there and I can still block shots and run the floor. Right now I’m just trying to get my confidence in stepping outside and shooting from 15 feet, 20 feet, stuff like that.”

CARTIER BOWMAN, WEST NOTTINGHAM (MD.) GUARD
A newcomer from New Jersey, Bowman made his area debut on Saturday and came away impressed with the level of competition.

“It was a great camp,” he said. “I really haven’t met these people and I really don’t know everyone here, so it was good to go against the people down here and go against different players from Virginia, DC, Maryland. It was a good camp, I liked it.”

The 6-foot-5 Bowman currently holds Division I offers from Florida Atlantic and New Jersey Institute of Technology. He pointed to his athleticism as his biggest strength - it was on full display Saturday - and doesn’t mind doing the dirty work.

“I really like to play defense a lot, and just being an energy guy,” he said. “It doesn’t matter to me if I have to score or not, I can be that energy guy – be that dog, really.”

Bowman will be counted on to help lead a new-look West Nottingham squad that has added several talented transfers. He joked that he enjoyed the brief trip away from West Nottingham’s rural setting.

“It’s in the middle of nowhere really,” he said with a smile, “so coming out here it was a kind of different because I had been in school for almost three weeks now, so I’ve really been around nothing. But coming out here and seeing all these different players and the area around here, it was a good change. I liked going against everyone down here.”

CAMERON SAVAGE, SOUTH LAKES (VA) GUARD
Coming off a strong spring and summer with District Basketball Club 17U, Savage is eager to carry the momentum into the high school season.

“We graduated a lot and we’ve got a real young team,” he said, “but I’m excited to lead them. I think we can do really big things; people are sleeping on us but I like that - I like the underdog mentality. Playing with District Basketball Club, we were the underdog going against all these sponsored teams, so I’m bringing that mentality to South Lakes.”

Savage - who averaged a team-high 8.3 points per game for Team Gray on Saturday - has been hearing mostly from Division II schools, listing Barton (NC) Gannon (Pa.) and Shephard (WV) as the ones showing the most interest.

“[Recruitment is] a little slow and I feel like I’m underrated, but it’s OK,” he said. “My Mom tells me ‘God will get you where you need to be,” and as long as I just keep working, things will come. So I’m just going to be patient and I’m going to keep grinding.”

“I think I’m a leader on the court,” Bowman said. “I see the court well and I get my teammates involved and I can score the ball and defend well. I’m big for my position and I play the wing, but this year my coach has been trying to make me into a point guard. I’ll be bringing the ball up and I can play any position.”