The Wilson senior is moving to the point. 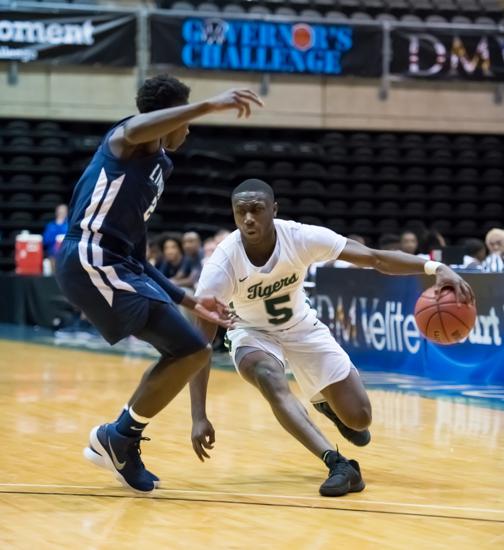 Few teams in the area are facing expectations as high as those at Woodrow Wilson (DC), and 2019 guard Jay Heath is one of the primary reasons why.

The 6-foot-3 Boston College commitment transferred in from Bishop O’Connell (Va.) last year and played a prominent role in Wilson’s sweep of the DCIAA and DCSAA titles last year, averaging 13.8 points per game. This year he’s transitioning into the point guard role following the graduation of star lead guard Ayinde Hikim (Mt. Zion Prep), and will be counted on to help lead a loaded lineup featuring another pair of D-I commitments in 2019 twin forwards Makhel and Makhi Mitchell (Maryland), as well as future D-I guard Dimingus Stevens. The Tigers are again expected to run through the DCIAA, and have supplemented their schedule with an ambitious out of conference slate.

Heath recently took some time to talk about his expectations for the season, his college choice, his favorite fashion, and more:

WHAT IS THE TEAM’S MINDSET FOR THE SEASON?

HOW EXCITED ARE YOU FOR THIS YEAR’S SCHEDULE?

“Very excited. We’ve got a national schedule; we’ve going to City of Palms, we’re playing in the Hoopfest Tournament Dec. 7, that’s a national tournament, then we go to New York. It’s a great chance for us to get our name out there, be nationally-ranked and compete and beat some good teams.”

WAS IT IMPORTANT FOR YOU TO COMMIT BEFORE YOUR SENIOR YEAR?

“Yeah, to get my mind right. Now I can just think about the season and help other guys get scholarships, you know? And just [work on] becoming a point guard.”

WHAT ADVICE WOULD YOU GIVE OTHERS GOING THROUGH THE RECRUITING PROCESS?

“Don’t go off the name or stuff like that. Go off, is it your playing style? Do they have your major for education? Do you think the coach is really crazy over you? Are you going to play right away? Stuff like that. It doesn’t matter about the big name, as long as you do your job, you’re going to get exposure.”

WHAT STOOD OUT TO YOU ABOUT BOSTON COLLEGE?

“I was watching them play, and their offensive style I really liked. And then Coach Jim [Christian] and Coach [Scott] Spinelli, they really believe in me. And I just feel like I can go to the next level from there.”

“Scoring on all three levels. Defense, a lot of energy, and basically running the team.”

WHAT ARE THE MAIN THINGS YOU WANT TO IMPROVE?

“Becoming a better point guard and making better decisions, you know? I’ve played two guard my whole life, and this year I’ve got to transfer to the one because in college I’m going to be a one.  So that’s basically what I’m working on now.”

“Off the court I just like to chill, you know? I like clothes and shoes and stuff like that. And being with my family; that’s about it.”

ANY PARTICULAR BRAND OF CLOTHING?

WHAT’S BEEN YOUR FAVORITE BASKETBALL MOMENT?