A look at some top performers and storylines from Day 2. 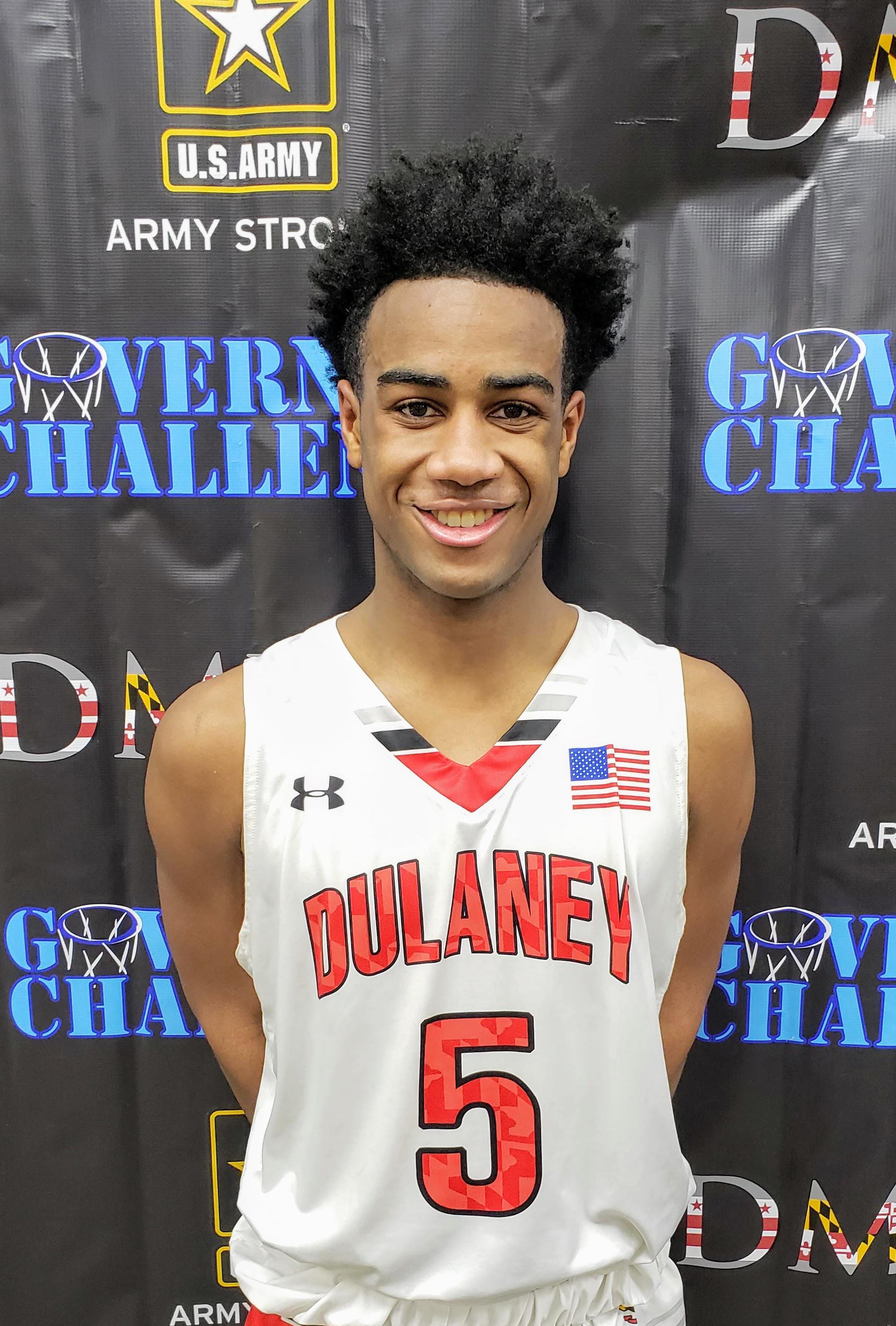 SALISBURY, MD - St. George’s (DE) 2019 guard Nah’Shon "Bones" Hyland was putting on a show against Dulaney (Md.) at the Wicomico Youth & Civics Center on Thursday night, appearing ready to single-handedly bury the Lions under a barrage of highlight-reel buckets.

Dulaney (Md.) weathered the storm, though, and when it was time to make their move, they took full advantage.

2021 guard Ryan Conway scored 23 of his 30 points in the second half as the Lions rallied for a 70-64 win in DMVelite Showcase Division action at the Governor’s Challenge.

“We had a rough start as a team,” Conway said, “and I feel like once we got grounded we brung it together. I think before we were a little more individuals, and instead of individuals we started playing together and I think once we did, things started opening up for us.”

The Lions needed every one of those points to counter Hyland, who finished with 34.

“Credit to him too, the kid can play - he’s tough, I’ll give it to him,” Conway said. “But in the second half I feel like we made him tired, and I think once we made him tired that’s when we capitalized - our whole team.”

The game was a good test for the Lions, who are expected to be in the mix for a state championship this year.

“I feel like it’s going great right now,” Conway said. “After this game now we’re 5-0 and I feel like with this team we can go all the way to county, region and states. We definitely have a chance and everything’s gone well so far.”

The Lions will face Pennsylvania power Neumann-Goretti on Friday to close out their Governor’s Challenge trip.

“The atmosphere is great,” Conway said. “We’re playing in a college-type arena and we’re going to be playing in hopefully five college gyms this year if we make it to where we want to get to. But this event is just great.” (MH)

St. Charles (Md.) opened in 2014 and is still in the beginning stages of building its basketball tradition.

So when the Spartans got a chance to gauge themselves against one of the nation’s most storied programs - 16-time Maryland state champion Dunbar - they jumped at the opportunity.

“When we were in the locker room they said go out here and send a message to the whole state,” 2019 wing Anthony Bowman said, “so that’s what we wanted to do. Playing yesterday against Caravel (DE), we were down, so we knew they were going to underestimate us a little bit. We said, ‘Let’s just go out here and play our game.’”

Bowman scored 14 points and grabbed 11 rebounds as the Spartans  took the Bracket 3 championship with a 64-52 win over the Poets. 2020 wing Darius Miles finished with 11 points while 2022 guard Amir Dade added 10.

The win closed out a successful inaugural Governor’s Challenge trip for the Spartans.

“Yeah, this is our first time doing this and it helps us see different styles of play,” Bowman said. “We played a team from Delaware, and they play totally different from how we play down in Southern Maryland. So, it was a good tournament and it was a good win.”

“We learned a lot from it, playing two good teams. Teams that won a state championship and teams ranked high in their state, so it's teaching us something and it's putting us out there at the same time, so I think it was a great trip. Now we’ve just got to go back home and take care of business.” (MH)

PRICE WORKING HIS WAY BACK

Marvin Price put the ball on the deck and attacked downhill, muscling his way for a gritty layup and subsequently yelling “and one!”

The 2019 guard didn’t get the call, hoping to get to the line and inch Patterson (Md.) closer as it trailed Sidwell Friends (DC) by nine in the fourth quarter. But on the following possession, Price received a dribble handoff at the top of the key and then buried the 3-pointer to make it a six-point game.

Patterson eventually lost, 66-55, but Price finished with 27 points on 11-for-19 shooting and bolstered confidence as he continues to recover from a torn meniscus suffered in March.

“I felt really good today, probably the best I felt all year," he said. "Best overall game with my confidence and body; Just have to stay consistent and keep fighting.”

Price, who is a three-star prospect by ESPN, took a recruiting blow when he was sidelined for seven months with the knee injury. As a sophomore, Price led Patterson to the 2017 MPSSAA 2A state title and garnered Baltimore Sun Player of the Year honors in the process. He then transferred to West Virginia’s Huntington Prep for his junior season, and now he’s back at Patterson to finish his high school career, where he’s trying to recapture the same level of relevancy from two years ago.

Currently, Seton Hall and Rutgers are the top two college programs interested in Price, who looks to lead the Clippers, now 6-2 heading into the new calendar year, to another state title. (KM)

WICOMICO IS ROUTED BY ELIZABETH (NJ) BUT SEES BIGGER PICTURE

Toting an old blue and yellow ball bag in his right hand and the scorebook in his left, longtime coach Butch Waller stepped toward an exit of the Wicomico Civic and Youth Center.

“Hey, it’s cold out there. Make sure to bundle up,” a bystander told the 53-year coach, who was donning his signature white sweater, khaki pants, and white Reeboks.

“I’ll be fine. My truck is right out there,” Waller responded, appearing to shrug off the input. Waller is, after all, cleaning up after a grimacing 61-26 loss to Elizabeth (NJ) in Thursday’s DMVelite Showcase game - both literally and mentally.

“We’re just embarrassed a little bit but we’ll get over it,” Waller said after the Indians’ first loss of the 2018-19 season and their first regular season setback in roughly a year-and-a-half. Last season, they rattled off 24 straight wins only to lose in the regional quarterfinals to eventual 2A runner-up North Caroline.

Like their crushing playoff loss, Wicomico (6-1) couldn’t crack Elizabeth’s ball-pressure heavy defense. The Indians shot just 25 percent (10 of 40) and turned the ball over 25 times on a night Elizabeth overmatched Wicomico with its length and speed, something these Indians don’t see on the Bayside.

“If you’re going to get beat, this is the time of the year to get beat, right here,” Waller said. “No Bayside team in the north or south plays defense like that. We won’t see anything better than that.”

“There’s no strategic thing you can say about this game other than their defense in the first quarter set the tone,” Waller added. “They completely took us out of our offense. If we hit a couple of those shots, maybe. But they completely shut out guards down. When we weren’t able to penetrate, they had good weak side help and our interior defense was very poor.”

Wicomico, which brings back dynamic guard Jaden Baker (13 points, five rebounds on Thursday), figures to regroup from the drubbing just a short walk from its home gym and formulate into the 2A East favorite they are pegged to be since the summer. The Indians will take Friday off before taking on Olympic from Charlotte on Saturday evening.

Los Angeles-based Veritas Prep became the first California team to take part in the Governor’s Challenge, but struggled to get going in their opener against Central Pointe (FL) on Wednesday and lost 72-44.

With a day to get adjusted they looked much better on Thursday, rallying from an early deficit and holding on to beat Legacy Early College (SC), 58-54.

“We came straight from the airport [Wednesday] and then we came to the court,” 2019 guard Iverson Molinar said. “It’s not an excuse though, but like, we just listened to coach today and bounced back from yesterday. We’re going to keep going.”

A Mississippi State commit, Molinar tallied a game-high 26 points for Veritas in the win. Veritas fell behind 17-9 after one quarter, but outscored Legacy 18-6 in the second quarter to take the lead and held it throughout an even second half.

“We just ran the plays and listened to our coach,” Molinar said. “We watch everything, we’ve just got to follow his instructions and play defense, too. Just getting to the rim, playing hard, playing physical and getting the rebounds - the details and the little things helped us.

Veritas will face Lincoln Academy (Ga.) Friday and Virginia Academy on Saturday to wrap up its inaugural Governor’s Challenge appearance and its longest trip from home. Molinar said the furthest Veritas had travelled for a game previously was Arizona.

ANOTHER DAY OF IMPRESSIVE NUMBERS

Indian River (DE) 2019 Jamier Felton scored 42 points - including the 1000th of his career - in an 85-79 loss to Walkersville (Md.), nearly matching the event record of 44 set by Harford Christian (Md.) guard Derrick Orr last year. Felton … Walkersville picked up the win behind 34 points - including 8 made 3-pointers - from 2021 guard Jacob Montgomery, who was coming off of a 39-point performance in a loss on Wednesday. His 73 combined points are believed to be the highest two-game total in Governor’s Challenge history. … Mardela (Md.) 2019 guard Syncere Pinkett dropped 40 points as the Warriors claimed the Bracket 5 crown. … Sidwell Friends (DC) 209 guard Jason Gibson wrapped up a strong week with 32 points to give the Quakers a 66-55 win over Patterson (Md.) in the Bracket 4 Championship game. … St. John's Catholic Prep (Md.) 2019 guard Brycen Hill dropped 31 points to carry his team to Bracket 7 championship victory over Arcadia (Va.), going 13-of-16 from the field and a sizzling 5-of-7 from 3-point range. ... St. Peters (NY) 2019 guard Chris Clancy had 28 points on 11-of-14 shooting to lead the Eagles  over Potomac (Va.).