A look at some top performers and storylines from Day 3. 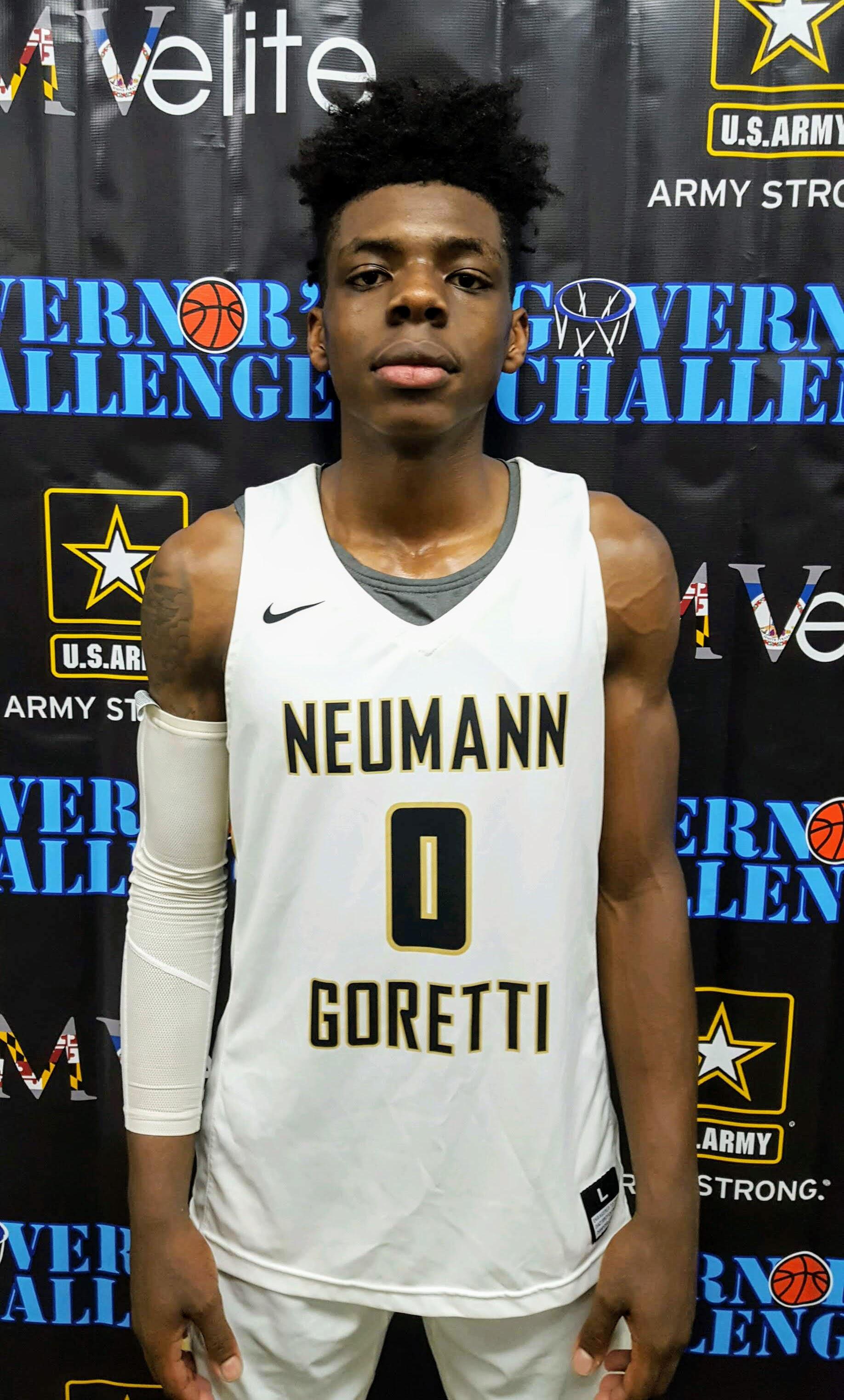 SALISBURY, MD - Day 3 of the 2018 Governor’s Challenge may have been the best yet, as illustrated by a pair of 3:15 p.m. thrillers at the Wicomico Youth & Civic Center on Friday.

The two-court setup had observers furiously trying to follow the action on Courts 1 and 2, as Neumann-Goretti (Pa.) vs. Dulaney (Md.) and St. Andrews (RI) vs. Central Pointe (FL) each featured frenetic overtime finishes.

“It was an absolute battle,” Dulaney coach Matt Lochte said. “Just talking with coach [Carl Arrigale of Neumann-Goretti] for a brief moment after the game - what a high school game. The environment was chaotic. If you’re a high school kid, that’s got to be a ton of fun for you, you know?”

That definitely proved to be the case.

“It was a lot of fun,” said Neumann-Goretti 2019 guard Chris Inges, a Rider University commit who scored 20 points and grabbed six rebounds in a full 44 minutes. “The level of intensity was high. The talent level was high on the court. Everybody was a good player on the court at all times. The crowd was in it. The bench was in it. It was a very fun game.”

At first, it appeared Neumann-Goretti would triumph in runaway fashion, as it mounted a 20-point lead toward the end of the first half and ran it up to 20 once more in the third quarter. But Dulaney, behind fierce efforts from 2021 guard Ryan Conway (19 points, six assists), 2020 guard Che Evans (15 points, 10 rebounds), and 2020 forward Cameron Byers (19 points, 10 rebounds), chipped away - pulling to within 10 by the end of the third quarter and then powering ahead, 53-52, when 2021 guard Isaiah Cornish converted a three-point play with four minutes to go.

The Lions led by as many as five with 2:02 left in regulation, but the Saints rallied to force overtime on a 3 by Ings, which led to two more extra periods.

“This is such a great event,” St. Andrews coach Mike Hart said, “and I think the way that [Tourney Director] James Simmons and [Director of Team Experience] Chris Jenkins are running it is professional, and they’re going to keep attracting really good teams. Obviously they are getting the job done, because the matchups are incredible and the fans are getting their money’s worth and seeing high-level action. Whenever a game goes into overtime, you really matched those teams up equally.”

When Michael Powell took over Archbishop Carroll in 2017 - a program that was winless the season before with a reputation of acting as the caboose of the ultra-competitive Washington Catholic Athletic Conference, one motive was prioritized: transparency.

“I just try and give [prospective and current players] my story,” Powell said. “I’m probably one of the most transparent coaches out here. I’m just trying to keep it 100 percent real for what it looks like for these young men. So, when I’m talking to players, and families - I like to recruit families - I give them a glimpse of what this school is, getting away from that negative stigma of what it used to be.”

Powell’s story is that of an accomplished coach who cares for everyone he comes across. He also is a director for Team Durant, a respected AAU program in the Metropolitan area. What it might look like, in terms of on court product and competition, is a cutthroat and grueling process, competing against some of the nation’s top program’s right in the conference.

On Friday, Archbishop Carroll defeated Wings (NY) 78-64 for its fourth win in a row and 21st victory over the past 40 games since Powell took the reins. Last year, the Lions went 17-12, as Powell established a winning culture from the onset. This year, he says, is centered around a beefed up schedule with more of national presence.

“We established that winning mentality last year. This year we’re focusing on a national schedule to show the kids where we want to be,” Powell said.

2022 guard Trey Thomas, who put up a team-high 18 points in the win Friday, chose to attend Carroll over neighboring powers like St. John’s (DC) and Gonzaga (DC) because of the opportunities Powell presented.

"Carroll is a great school,” said Thomas, a 6-foot-3 guard with promise.

“We’ve definitely taken a step in the right direction,” Powell said. “I owe that to the administration.”

Powell is also the director admissions at Carroll, which is known for its engineering program that partners with a host of local colleges. Carroll also recently launched the Jim Vance Media Broadcast Program, which offers full tuition for students looking to become on-air talents. Additionally, the school was recently renovated, including a new track and field, and gym.

Three of Carroll’s four consecutive wins have come at the Governor’s Challenge. It started Tuesday with an 83-50 rout of Delaware’s St. Georges and continued with a buzzer-beating, 54-53 win over Olympic (NC). Powell hopes to ride this momentum into the new year and perhaps eclipse the 17-win mark his team posted last season.

“Last year, [the Governor’s Challenge] helped us with our season,” Powell said. “I love this tournament.” (KM)

As his Walt Whitman Vikings continued to find answers with such stoicism and cohesiveness against a bigger, more athletic New Town team, Coach Chris Lun perched along the sideline, soaking in this display while preparing his team for the next play.

Over the summer, Lun entered his team in the Capitol Hoops Summer League at DeMatha Catholic High School, where they played Washington area powerhouses Bowie (Md.), Paul VI (Va.), St. John’s (DC), and Wilson (DC). Those scrimmages weren’t necessarily close, but the results didn’t matter as much as the opportunity and developing mettle for big-stage moments.

On Friday, those summer hours helped Whitman score a 49-43 win over New Town, as the Vikings distorted the Titans’ offense with a packed-in 2-3 zone while hitting seven 3-pointers. From a personnel standpoint, New Town figured to overmatch Whitman, with seven players over 6-feet-5, including 6-foot-8 2021 center Julian Reese. But the Vikings, led by 6-3 2019 guard Brendan Shaver (15 points, eight rebounds), stayed the course and were never fazed.

“The thing that speaks to the guys is they weren’t intimidated,” Lun said. “We’ve seen so many of the good teams, so our kids don’t take the court scared. I think that goes a long way.”

“We told the guys before the game, ‘If they are going to beat us, they’re going to have to hit from the outside,’ “ Lun said.

And that’s what the Vikings were able to do, as the Titans missed 21 of their 22 attempts from downtown. New Town’s only 3-pointer came in the first quarter, when it led 17-15 through eight minutes.

New Town regained the lead late in the third quarter, 32-29, before Whitman rattled off a 9-0 run to take the lead for good with 6:30 left in the contest.

“We had a chance early in the season to step up and show how we can stand with some of the private schools, but we didn’t play well and blew our opportunities,” Lun said. “So we knew this was another chance to prove we can play with some of the better teams.”

“It’s a huge confidence booster,” Shaver added. “When we go back to [Montgomery County], we’re not going to see a team anything like that.”

“We’re really excited. It’s a good win for Whitman,” Lun said. “We have a lot of work to do, but this is a big confidence booster for us.” (KM)