The DMV duo helped Michigan to victory in the Coaches vs. Racism Classic. 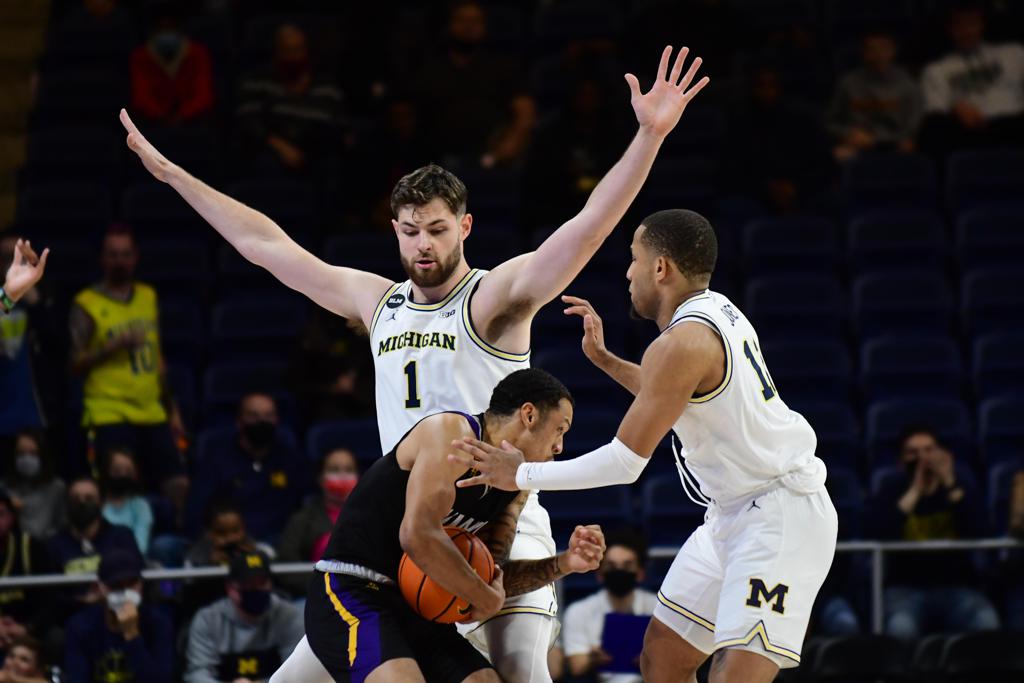 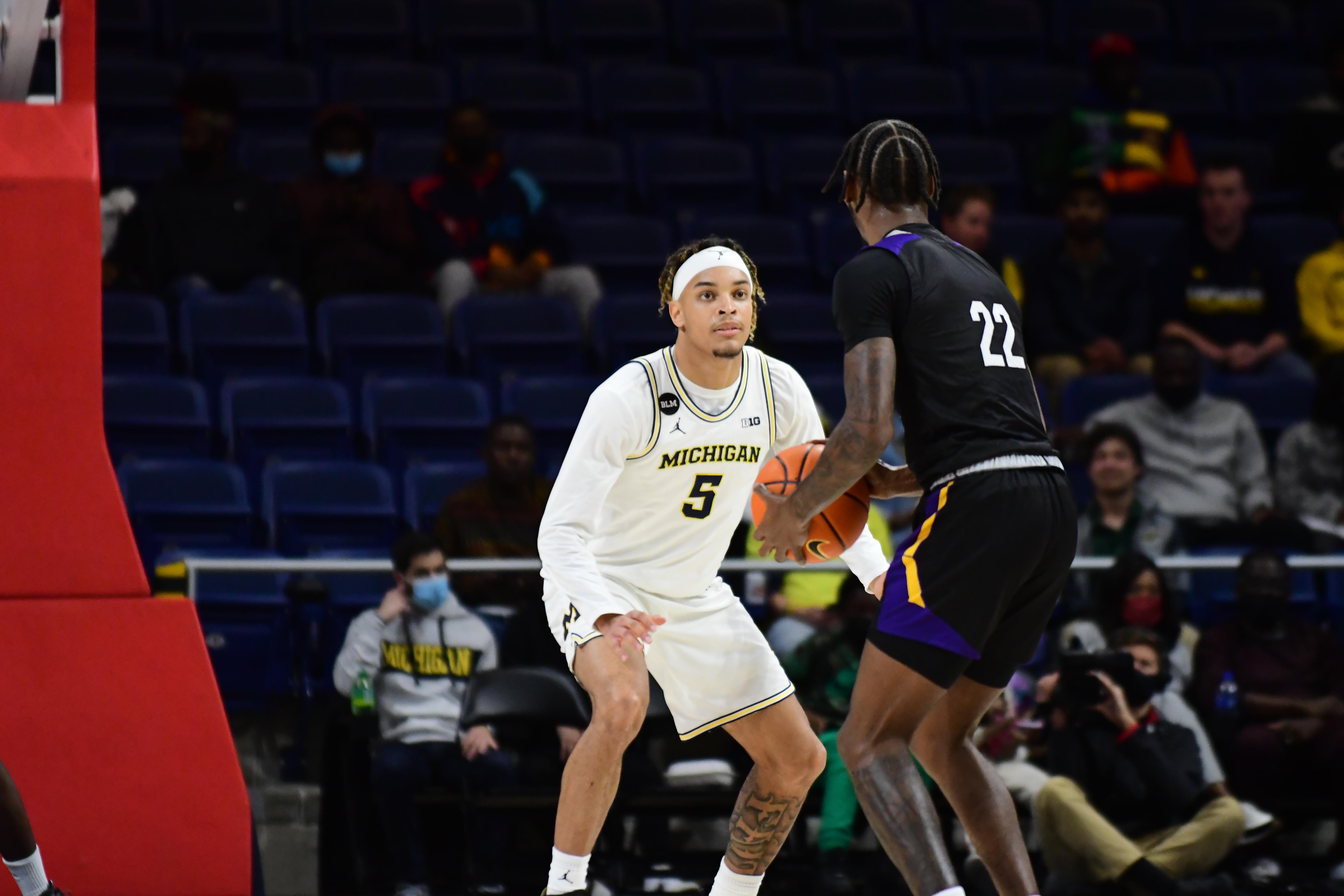 WASHINGTON, DC - Since heading off to play at the University of Michigan, DMV basketball products Hunter Dickinson and Terrance Williams have had limited opportunities to play locally in front of family and friends.

They had the rare chance on Saturday and took advantage, helping the Wolverines to a 77-49 victory over Prairie View A&M in the inaugural Coaches vs. Racism Roundball Classic at the Entertainment & Sports Arena in Southeast.

“Just being in the area feels good to have a lot of family members come,” Williams said. “Seeing you [media] guys, it reminds me of being back in high school; it’s like a cool experience of seeing everybody back and united and coming to the games and supporting me and Hunter and the team. It's definitely a great experience whether it’s playing Maryland or this, or anytime being in the DMV area.”

Michigan’s Eli Brooks and Prairie View’s William Douglass tied for high-scoring honors with 15 points apiece. The Wolverines never trailed, and built a 42-23 at the half.

A sizable contingent of supporters turned out for Dickinson and Williams, who were the 2020 DMVelite All-Maryland and DMVelite All-DC Players of the Year, respectively.

“Just being back in the DMV is really fun,” Dickinson said. “Obviously this is where we grew up and made a lot of memories, and so for me it's always good to come back here and see my family and stuff and have them be able to watch me play.”

The next DMV-to-Michigan prospect was in attendance as well, as Paul VI (Va.) 2022 guard and Wolverines signee Dug McDaniel took in the action in DC. According to Williams, McDaniel won’t be the last area prospect headed to Ann Arbor.

“Whenever I see there’s some interest or a coach came [to see a prospect], I’ll talk to them and be like, ‘Yeah, this is where you really fit at,’” Williams said. “‘You could play under Juwan Howard, he’s a great coach.’ I try to sell Michigan as much as possible to those recruits.”

Howard - a member of Michigan’s famed Fab Five squad - started his NBA career with the Washington Bullets, and said his time in the area made it easy to make it a priority recruiting destination.

“When you talk about some of the high school athletes that are here in the area - whether it's DC, Maryland, Virginia - it's a lot of talent,” he said. “And not only that, they are really good students, too, and come from good families. And I just loved how throughout the high school level, the parity of all the different talents spread out at different schools and the level of coaching that goes with it and is being taught at those schools both on the court and off the court. I’ve been impressed, so I thought it was a no-brainer to go out there and look at a program like DeMatha, Gonzaga, Paul VI and many others, because those coaches that coach at those programs do an amazing job of developing the young talent.”

Saturday’s game was part of a brutal stretch of travel for Prairie View, which opened with a span of six games in eight scattered across the country.

After opening on Tuesday November 9 at St. Mary’s (CA), they played at San Francisco on Thursday before traveling to DC for Saturday’s game. They traveled to Stillwater, Oklahoma to play Oklahoma State on Sunday and faced Texas Tech in Lubbock, TX on Monday, before closing the stretch on Wednesday in Phoenix, AZ at Grand Canyon University.

“It just kind of comes with the territory,” Panthers coach Byron Smith said. “It’s part of our recruiting pitch. I mean, some kids, they don’t get an opportunity to travel and come to a Washington, DC. That’s why I like to take trips and go to different places so they can get a little bit of culture if you will. Unfortunately we didn't get a chance to spend much time here in DC because of travel, but we would have been able to get out and see some of the sights, and I think that’s good.”

Prairie View guard Jawaun Daniels - the Preseason Southwestern Athletic Conference Player of The Year - said he and his teammates are accustomed to the travel grind.

“We just try to emphasize, ‘Stay dialed in, stay locked in, take care of your body and make sure you’re getting the right treatment and putting the right stuff in your bodies,’” he said. “The hotels and coaching staff definitely did a good job as far as preparing meals and keeping us hydrated for the games and stuff. … It's pretty tough, man, but we’re built for it. The way we practice and the way Coach Smith’s set us up, I feel like we’ll be ready.”

Saturday’s game was put on by Coaches Vs. Racism (CVR), a national nonprofit designed to end systemic racism in sports. The lead up to Saturday’s game included panel discussions and a trip for the teams to the National Museum of African-American History and Culture. Iconic 1968 Olympian John Carlos was recognized at halftime of the game.

Wood said this event was just just a one off, adding that there are plans to expand it to include more teams. 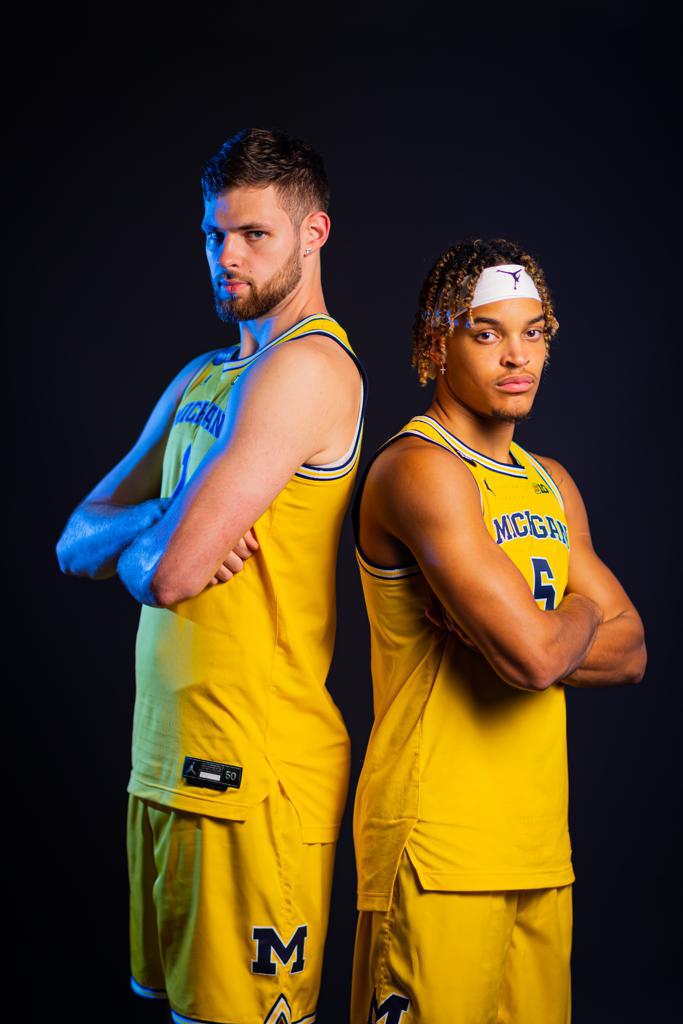