Mikey Allen wins it at the buzzer, and more from a thrilling second day at the ACIT. 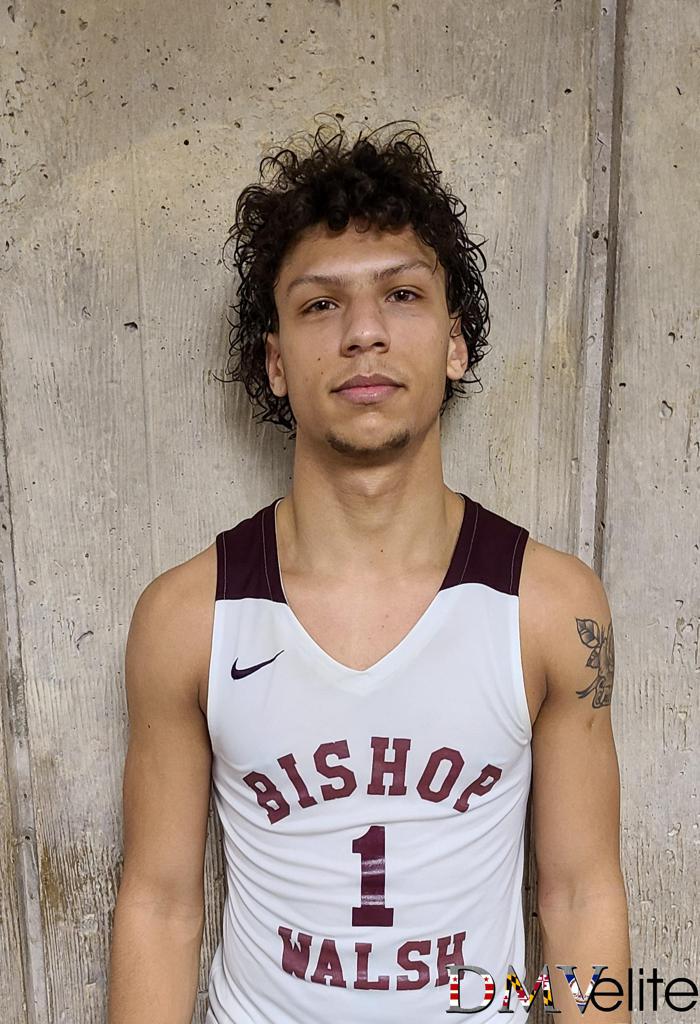 Compared to the lights-out shooting performance he put on in his team’s Alhambra opener on Thursday, Bishop Walsh 2023 guard Mikey Allen was struggling Friday.

Through the first 31 minutes and 58 seconds of his team’s Friday meeting with Bishop McNamara, Allen was just 1-of-6 from the field - all on 3-pointers - and had one long make wiped off the board after he stepped out of bounds.

When it REALLY counted, though, he came through, hitting a 3-pointer as time expired to give the Spartans a thrilling 47-46 victory in a consolation bracket opener.

“I couldn’t hit a shot all day, but my teammates had confidence in me,” Allen said. “My point guard [DJ Dormu], he always finds me, and he found me for the last shot and I hit it.”

Trailing 46-44 with 12 seconds remaining, BW guard TJ Robinson drove to the basket but had the ball knocked away from behind by McNamara’s Jaren Curtis.

Spartans guard Travis Roberts picked the loose ball up and threw it to Dormu, who couldn't grab the high pass and had to chase it down in the opposite corner. With two defenders in his face, Dormu threw a skip pass to Allen on the opposite wing, who caught the ball with 3.2 seconds remaining and Curtis closing in.

Allen used a shot fake to avoid Curtis, reset, and let it fly with just under 1.5 seconds remaining. The buzzer sounded just as the ball went in, and the celebration was on, with Allen’s teammates mobbing him.

“We wanted Mike [Williams] to get to the hole and try to extend the game,” BW coach Dan Prete said of the original play. “I just thought DJ going after the ball was incredible. To be honest with you, when that ball hit the corner, I was screaming,’ Timeout!’ but the ball was in the air. I thought Mike was just so calm to [fake and reset] and when he got the ball, and I was not going to call timeout, because he’s our most consistent shooter. I thought i was just really good of him to show the ball and take that hard dribble and knock it down.”

The shot was especially for Allen - a Cumberland native - to hit in front of his home fans on such a big stage.

Allen recently picked up his first Division I scholarship offer from Maine, and Prete thinks a lot more schools need to join the conversation.

“He’s our guy and we expect this, “Prete said. “It's a feel-good story for the community, but for us, that’s what he’s supposed to do. I just think more [recruiters] should be getting on him, because they’re going to find out because he’s going to drop it on them. The kid can flat-out shoot the ball.”

“He hit three 3’s, it's just one of them he was out of bounds,” Prete joked. “Shooters are shooters because they don’t worry about the last shot - they worry about the next shot. He was in that mode, and it was great for him.”

STAGS TAKE IT PERSONAL AGAINST PANTHERS 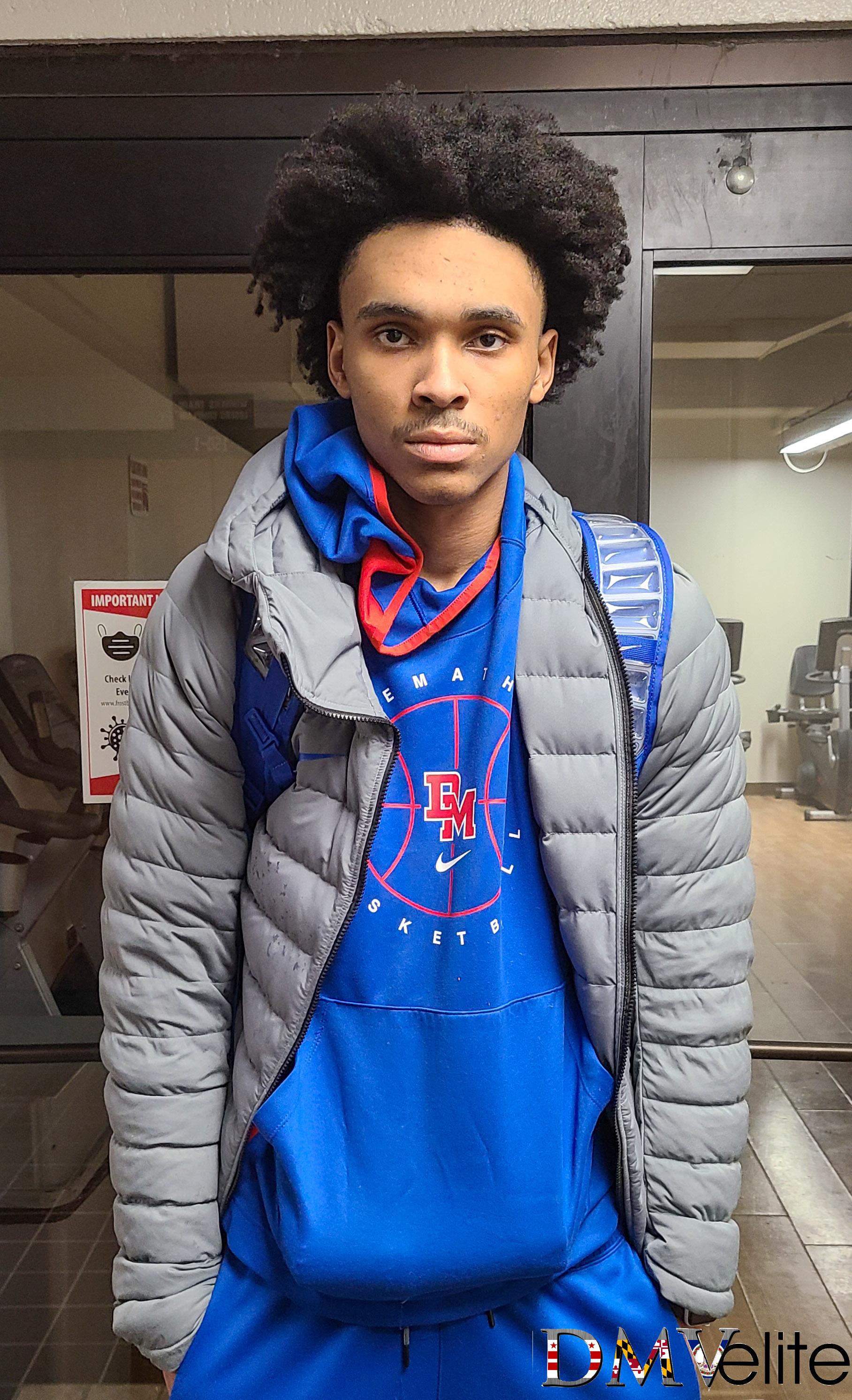 In their opener against Bishop Walsh on Thursday, two-time defending ACIT champion DeMatha started slow and needed to rally in the fourth quarter to stave off the upset.

Motivated to avenge a loss to the Panthers earlier this season, the Stags came out with intensity from the opening tip en route to a 71-58 semifinal victory.

“We don’t try to let our opponent dictate how we play,” Ward said, “but we feel like we owned those guys a lot, because they came in our house and they beat us. So that one, we took it a little personal.”

Ward was referring to St. Frances’ 59-55 victory in the National Hoopfest at DeMatha back on December 5, where SFA 2022 guard Bryce Lindsay scored the go-ahead bucket in the final seconds.

It may have been three months ago, but several Stags said it was still fresh in their minds.

“They beat us last year on our home court at Hoopfest, and they disrespected our Stag, and we couldn’t have them do that,” 2024 wing AJ Swinton said. “So we had to get them back. Yeah, it was personal.”

Said 2023 guard Jaden Winston: “It was a get-back game for us, so we were ready for this one.”

DeMatha coach Pete Strickland said he was pleased with the contributions he got from up and down his roster on Friday.

“It just felt like it was across the board, so I went in there and told them that - it was a Team MVP,” he said. “Isaiah Arnold and Logan Lewis - their energy defensively was so huge and so key. Obviously our two highlighters [Rice and Ward] performed like highlighters, but it was some of those other guys that really were solid. Malcolm Thomas coming off the bench just gives us energy and a presence in there. Jaden Winston controlled the ball - they were really defending Rodney wisely and face-guarding him, and Jaden just took all the pressure off.”

Strickland said some of Thursday’s slow start - in addition to strong play from Bishop Walsh - may have been due to rust, since the team hadn’t played in 12 days coming into the event. They seemed to have fully shaken that off against the Panthers, and are confident heading into the title game.

“It’ll mean everything,” Winston said of potentially closing the season with a title. “We didn't get to win WCAC. Winning for our seniors and coming together for one goal would be big for us.”

2023 guards Jahnathan Lamothe and Carlton Carrington each had 16 points to lead St. Frances, while UNC-Greensboro-bound 2022 forward Cortez Johnson had 11 points and 8 rebounds and 2022 forward Taion Robinson had 10 points.

HANSBERRY A "SEAMLESS" FIT FOR MSJ 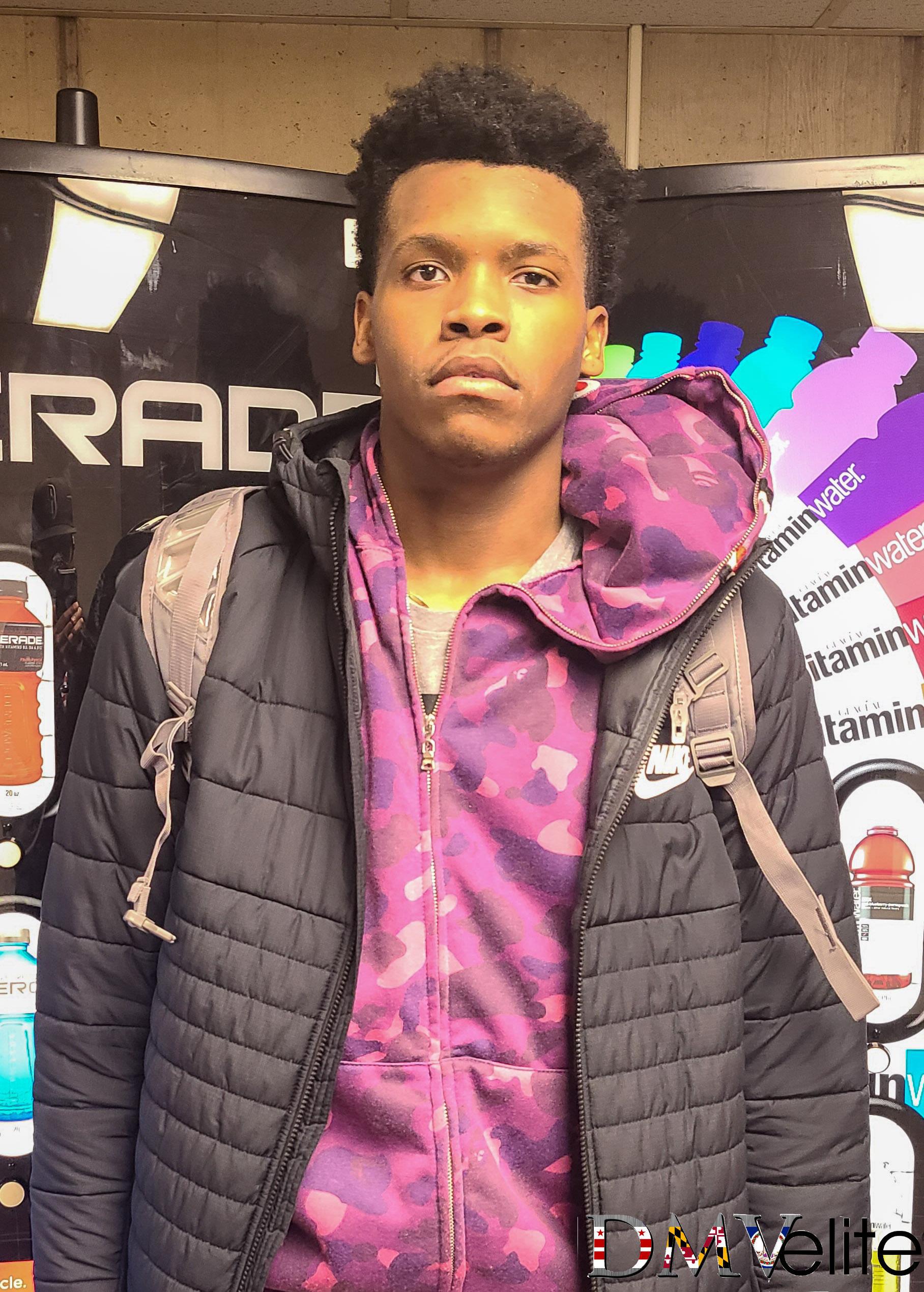 Mount St. Joseph 2023 forward Amani Hansberry made an immediate impact after coming in from St. John’s (DC) last summer, giving the Gaels one of the area’s best inside-out threats.

“Seamless,” MSJ coach Pat Clatchey said of incorporating Hansberry. “Just a great person and a very good player. Very versatile player and a great teammate, and just all about winning.”

Hansberry has continued his strong play in Cumberland, posting his second straight double-double with 29 points and 12 rebounds in an 89-82 double overtime victory over Gonzaga. He had 11 points and 13 rebounds in a loss to Paul VI Thursday.

Showing his range, Hansberry hit a 3 as time expired in regulation to force the first overtime Friday.

“Everybody believed in me [to make it],” he said. “Ace Valentine, he passed me the ball and he made the right read - two came to him and I was wide open, so I just had to knock it down.”

The 6-foot-8, 230-pound Hansberry said Clatchey and his teammates made the transition to MSJ easy.

“Yeah [being familiar with Gonzaga and PVI] definitely helped,” he said, “but it’s exciting just leaving the DC area and going to the Baltimore area, playing as good as I did and then coming back and knowing I can still play in the DC area as well.”

As for his recruitment, Hansberry said he’s most recently heard from NC State, Illinois, Penn State and George Mason, among others.

“Im looking for a place I can call home,” he said. “I'm not looking for a ‘Yes’ coach who's going to say yes to everything and not make me get better. I just want someone who is going to get on me like Coach Clatchey and just want the best for me.” 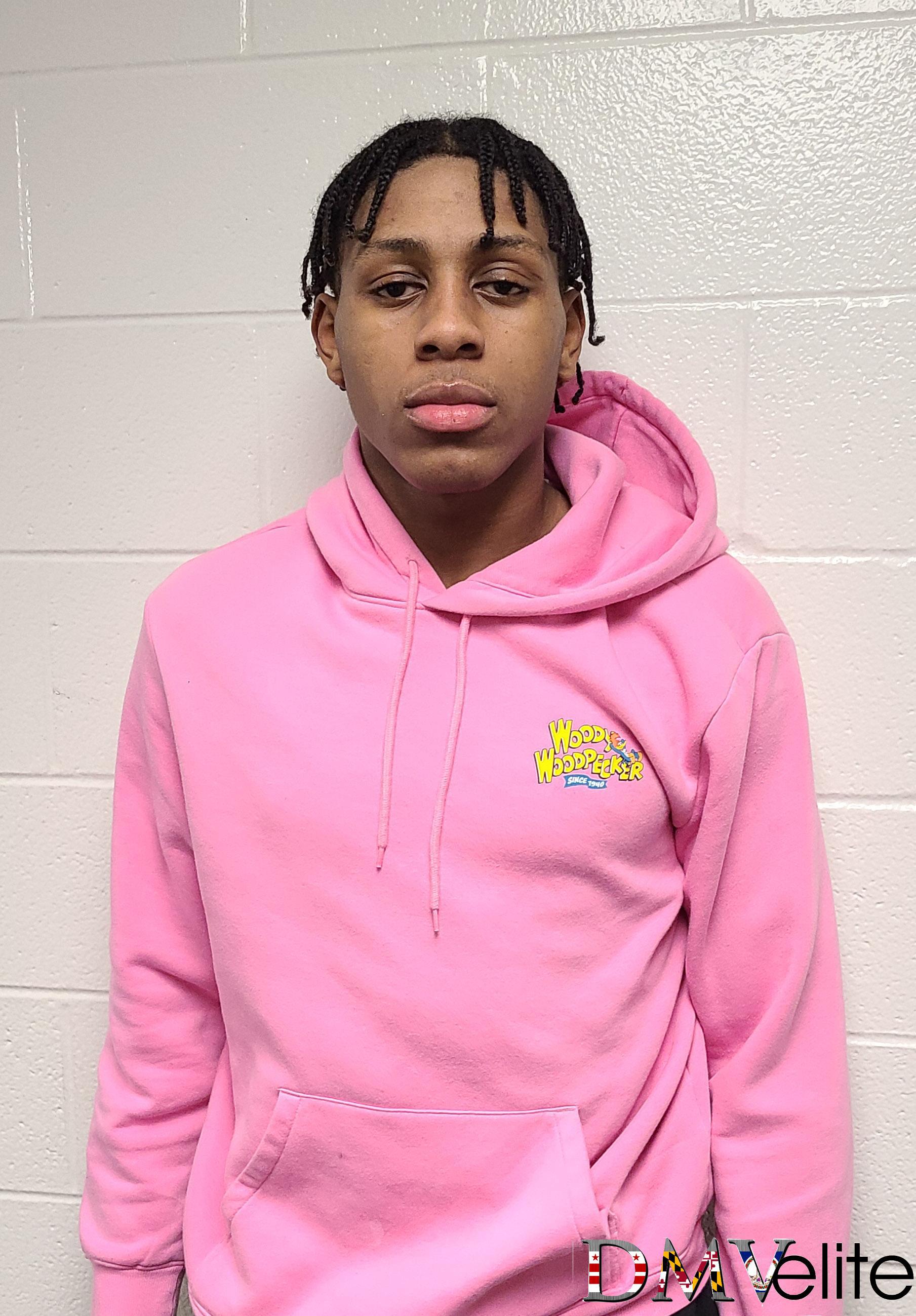 For as long as he’s played basketball, toughness has always been one of Paul VI 2023 wing DeShawn Harris-Smith’s calling cards - there may not be a more fitting Twitter handle than his, @ThatDogDeShawn - and it was on full display in Friday’s 69-66 comeback victory over a very good Long Island Lutheran squad.

Harris-Smith threw himself all over the court, posting 21 points, 5 rebounds, 4 steals and 3 assists to help lead the Panthers back from an early 11-point hole to advance to Saturday’s Alhambra championship game against DeMatha.

“That’s just the type of basketball player I am,” Harris-Smith said. “I’m very physical; I'm trying to guard one through five - I was picking up JP [LuHi 2022 star guard Jayden Pierre] and then trying to guard the five, so I’m just going to get hit, but that’s part of basketball. … I feel like when you play basketball you’ve got to have a stamp on something, and I feel like my stamp is my toughness and my will to win, so I try to bring that every day.”

The Panthers have needed every bit of it during their run of postseason success. They’ve ben beaten up along the way and have been noticeably fatigued at times, but Harris-Smith’s energy has been a constant.

“He’s got the heart of a champion,” PVI coach Glenn Farello said. “Wherever he decides to play in college is getting just a true, bonafide winner - he does whatever it takes to win. He cares so much about his teammates and he cares about ‘bleeding black and gold,’ as we do here at PVI and talk about all the time. He’s our emotional leader and he’s just a tough dude, man, and I’m excited we get him back next year.”

Tonight’s meeting between PVI and DeMatha will be the second straight for the Alhambra title, with the last coming at the most recent event in 2019. Current Villanova guard Justin Moore had a game-high 25 points to lead the Stags to victory.

Michigan-bound PVI 2022 guard Dug McDaniel was a member of that squad, finishing with a game-high 18 points.

“Its definitely fun,” McDaniel said of facing the Stags again. “We beat them earlier in the season so we definitely know they’re coming in with high energy and they're trying to get back at us. We’ve just got to come ready to play - don’t get too caught up in the matchups and stuff like that, just play our game and win our game as a team.”