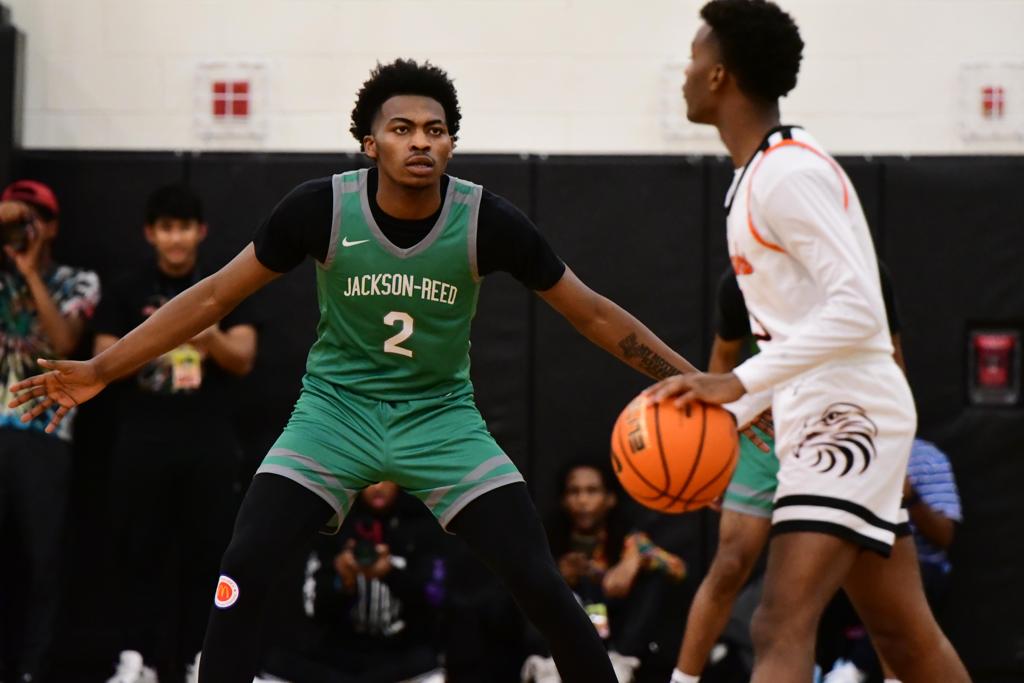 OXON HILL, MD - As the Hayfield basketball team used a strong start to this season to extend its impressive winning streak to 40 games, the accomplishment wasn't something those in the program talked about openly.

In the lead up to their much-anticipated showdown with Hayfield on Saturday, however, the Jackson-Reed Tigers took a different approach.

“Oh for sure; that’s been harped on every chance I could,” Jackson-Reed coach Tee Johnson said. “‘Hey, do we want to be team 41? Let’s rain on their parade; let’s be the villains of their story.’ So I just put it to them as, ‘Hey, we’ve got an opportunity to stop history and tonight we were able to do that.”

Behind timely perimeter shooting and defensive stops, the Tigers bought Hayfield's streak to an end with an 83-78 victory in The Hoop Buzz Invite at Oxon Hill High School.

“It was definitely a big environment,” Dockery said. “I knew it was coming - I’d been waiting for this game - but we got the job done.”

Brimage hit four 3-pointers in the win - each one seemingly coming at a bigger point in the game.

“Every game is a different game,” he said. “I came out in the warmups hitting shots, so I just expected to come out in the game on fire.”

Hayfield won its first state title in school history last year with a perfect 32-0 campaign, and had opened this season with 8 straight victories.

So although it wasn’t something the Hawks wanted people focusing on as they seek a championship repeat, the streak had definitely begun to take on a life of its own. And as it grew, so did the target on Hayfield’s back.

“Yeah! Yeah, we went over that,” Gilmore said enthusiastically. “Yeah, we knew they won 40 straight - we wanted to put an end to that. They hadn’t lost in two years, we wanted to break their history.”

Hayfield struck first Saturday, jumping out to a quick 12-3 lead before Jackson-Reed called a timeout with 4:59 to go in the opening quarter. The Tigers settled in and trimmed the Hawks’ lead to 22-19 after one quarter.

The Tigers took their first lead on a Lucas Sekasi 3-pointer with 2:12 remaining in the half. Hayfield regained it on a Jones bucket, but a pair of free throws by Forte sent the Tigers into the locker room up, 41-39.

Gilmore opened the fourth with a 3-pointer, and Hayfield couldn’t get closer than three points the rest of the way. John Awoke was fouled on a bucket and hit the free throw to cut the Tigers’ lead to 81-78 with 13.3 remaining, but Dockery hit a pair of foul shots with 11.9 seconds remaining to officially ice it.

“I think we were able to get stops,” Johnson said. “They were in foul trouble late, #32 [King] was in and out the game, so they didn’t really have anyone at the rim so we tried to force the ball to the rim as much as possible. Marvin Brimage hit big shots, Justin Gilmore made big plays and then Joe [McRae] didn’t have his greatest game but he came off at the end of the game and hit a big three in the corner for us. So [the key] was just our guys making plays down the stretch.”

The Tigers face HD Woodson and McKinley Tech in DCIAA action this week before a pair of big non-league tests against John Marshall (VA) and Grayson (GA) in The St. James MLK Classic.

“Winning a game like this is pivotal for the program. I think it shows the area how good we are - and Hayfield, that’s a great team, they’re the Virginia state champions. So I think it just shows people that, hey, we’re a pretty good program.”

Hayfield will look to get back on the winning track with games against Mount Vernon and rival Edison this week.